Home The January issue of the Awakening Times is Out!

The January issue of the Awakening Times is Out! 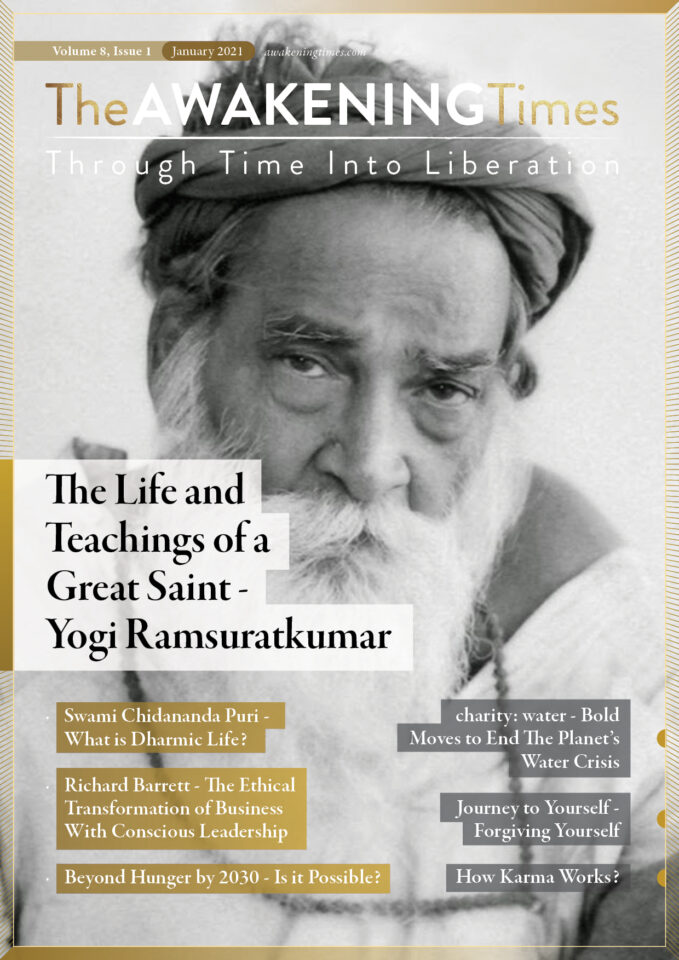 The January issue of the Awakening Times brings great wisdom and knowledge on Life Topics!

The Awakening Times’ first edition of 2021 is focused on a universal theme – humanity! This issue brings forth varied perspectives and inspirational stories on how humanitarian thinking can truly uplift world consciousness and awareness. Read on for stories from the life of Yogi Ramsuratkumar to wisdom from the Vedas (ancient scriptures from India) as retold by a modern-day spiritual activist, Swami Chidananda Puri. Can conscious leadership transform conventional thinking in business – read the views of Richard Barrett, a thought leader in this domain. Have you ever wondered what it would take to create a global non-profit organisation with no prior experience? Or what it would take to create a movement around veganism and cruelty-free living? Read the stories of charity:water and Veganuary to draw inspiration.
Don’t miss this power-packed issue!

You'll find all this and much, much more in your favorite spiritual magazine.

Let us uplift society. Let us contribute to positive change in the world. Let us spread the word and vibration of Awakening.

Have a look at The Awakening Times January 2021 Edition!

The Life and Teachings of a Great Saint - Yogi Ramsuratkumar

Yogi Ramsuratkumar is a great saint who spent most of his post-enlightenment period in Tiruvannamalai, a power centre in Tamil Nadu (India), also famous as the home of another renowned saint, Ramana Maharishi. Yogiji attained Mahasamadhi (conscious exit from the body) in 2001 and his teachings are propagated via his Ashram in Tiruvannamalai. Yogiji’s life was his great message – unassuming and humble, his impact on people around the world and his teachings to uplift human consciousness and humanity were colossal. In a detailed interview on the Palak Mehta Show, Ma Devaki - Yogiji’s closest disciple – talks about Yogiji and various incidents and stories from his life, that give us food for thought and reflection.

Wisdom from the Vedas from the mouth of a powerful spiritual master and spiritual activist; Swami Chidananda Puri. He is like none other, tirelessly spreading the age-old science of Advaita. He has written more than 30 books on the subject and is the founder of the center of Vedanta studies. Advaita is an age-old system of spiritual realization in India. What is limitless, beyond nationalities, beyond religion, beyond species, beyond castes? There is an eternal order that exists in the universe. The Indian Constitution has called Hinduism a way of life. Sadly today, it has been misrepresented as a religion "The reality is one without a second". Swami Chidananda Puri brings a deeper understanding of Hinduism, or as it’s properly called, Sanatana Dharma, the Eternal Dharma and to share the knowledge which he has won through and can only be won, through experience.

Richard Barrett - The Ethical Transformation of Business With Conscious Leadership

Richard Barrett, a globally recognized thought leader in Values-Based Leadership, Cultural Transformation, Personal Development, and personal, cultural, and societal wellbeing, is coaching and transforming leaders and organizations throughout the whole world. They bring a holistic perspective to individual, organizational and social levels of development. Richard’s world view offers ideas that could transform humanity and uplift our global consciousness to its highest state.

The World Food Programme is a philanthropic arm of the United Nations and has set the ambitious goal of ending hunger by the year 2030. Here we take a look at how things currently stand in terms of food poverty, how COVID-19 is affecting us, some of the obstacles that we will have to overcome and proposed solutions. Statistics may be dry but there is a very uncomfortable reality behind all the figures which has a very real impact on the lives of all who call Earth home. The first thing that we need to do is to be as well informed as we possible can.

A purposeless man asks himself an extraordinary question which entirely transforms him. With no experience he leaps boldly into a new adventure: He begins to work for the welfare of the world. The challenge he took in hand is enormous, but the impact of his work has been huge as well. “It’s about impact, goodness, and making history.” – Scott Harrison. At 28 years old, Scott Harrison had it all. A top nightclub promoter in New York City, his life was an endless cycle of drugs, booze, and parties. But 10 years in, desperately unhappy and morally bankrupt, he asked himself, "What would the exact opposite of my life look like?" Walking away from everything, Harrison spent the next 16 months on a hospital ship in West Africa and discovered his true calling. In 2006, with no money and less than no experience, Harrison founded charity: water. Today, his organization has raised $496 million to bring clean drinking water to more than 11 million people around the globe.

Veganuary On A Quest Of Enabling Humanity For Everyone

Since 2014, Veganuary has inspired and supported more than one million people in 192 countries to try vegan for January – and beyond. They have worked with businesses to drive up vegan food provision in shops and restaurants, and have made veganism more visible and accessible through their work with national and international media. They say their vision is simple; they want a vegan world. Read more to find out the impact Veganuary had on the world.

A Powerful Message of Veganism

Hein Adamson has been working in the vegan food service industry for the last 4 years and is currently studying at the Vegan Gastronomy Culinary Academy. Here shares his how he found encouragement and a lesson or two when he came across the Veganuary challenge.

Journey to Yourself -  Forgiving Yourself

Your thoughts, words and actions are powerful forces. Once you unleash them, they come back to you like a returning boomerang, bringing back exactly what you send out. Suzy Singh, International Author of the Best-selling book 7 Karma Codes, speaks on how karma affects us. Touching on causality, desire and intention; the understanding presented is invaluable in helping us stay lighter and maintain our clarity in relationships and when dealing with the world.

Subscribe for free and be the first to receive the new monthly issue in your email inbox!

Jan 27, 2021Editorial Team
The Life and Teachings of a Great Saint - Yogi RamsuratkumarA Window into the Mysterious Life of a Məst