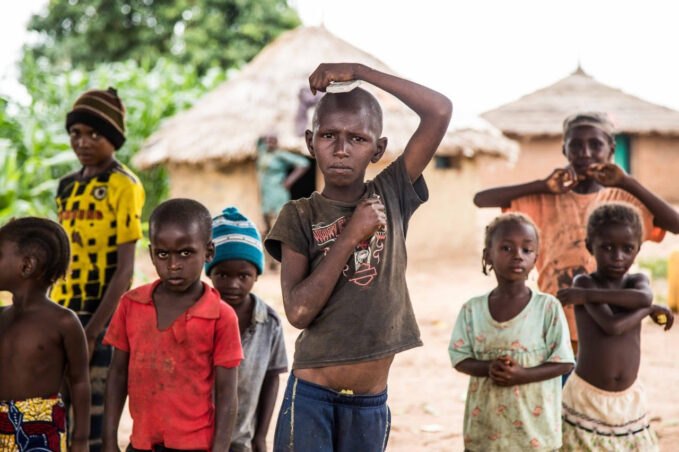 The United Nations World Food Programme is the world’s largest humanitarian organization, saving lives in emergencies, building prosperity and supporting a sustainable future for people recovering from conflict, disasters and the impact of climate change.

World Food Programme was awarded with a Nobel Peace Prize in 2020.

Having taken up his current position as WFP Country Director in Chad after experiences in war-torn countries — most recently, the Democratic Republic of the Congo (DRC) — Claude Jibidar has witnessed first-hand how conflict and hunger feed each other.

“To me, zero hunger doesn’t mean that, tomorrow, not one single person will wake up and be hungry. There will be people who will wake up and be hungry, simply because we have floods, we have droughts; we have natural disasters. It will happen that people will lose everything. All those unpredictable events will cause hunger,” Jibidar says. “In those cases, the most important thing is to make sure that governments can respond and bring food to those people, and if they can’t, that WFP does it.”

“So, disasters can happen, but there is one thing which is a major driver of hunger and could be prevented: conflict,” Jibidar continues. “This is the message behind this Nobel Prize: conflict is something that can, and must, be addressed.” 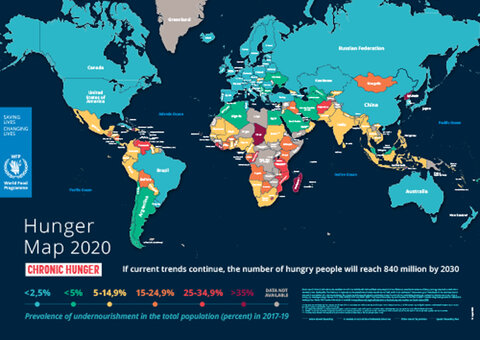 The number of people affected by hunger globally has been slowly on the rise since 2014.  è Current estimates are that nearly 690 million people are hungry, or 8.9 percent of the world population – up by 10 million people in one year and by nearly 60 million in five years. The number of people affected by severe food insecurity, which is another measure that approximates hunger, shows a similar upward trend. In 2019, close to 750 million – or nearly one in ten people in the world – were exposed to severe levels of food insecurity.

Considering the total affected by moderate or severe food insecurity, an estimated 2 billion people in the world did not have regular access to safe, nutritious and sufficient food in 2019.

If recent trends continue, the number of people affected by hunger would surpass 840 million by 2030. è A preliminary assessment suggests that the COVID-19 pandemic may add between 83 and 132 million people to the total number of undernourished in the world in 2020 depending on the economic growth scenario.

The PoU in Africa was 19.1 percent of the population in 2019, or more than 250 million undernourished people, up from 17.6 percent in 2014. This prevalence is more than twice the world average (8.9 percent) and is the highest among all regions.

Asia is home to more than half of the total undernourished people in the world – an estimated 381 million people in 2019. Yet, the PoU in the population for the region is 8.3 percent, below the world average (8.9 percent), and less than half of that of Africa. Asia has shown progress in reducing the number of hungry people in recent years, down by 8 million since 2015.

In Latin America and the Caribbean, the PoU was 7.4 percent in 2019, below the world prevalence of 8.9 percent, which still translates into almost 48 million undernourished people. The region has seen a rise in hunger in the past few years, with the number of undernourished people increasing by 9 million between 2015 and 2019.

In terms of the outlook for 2030, Africa is significantly off track to achieve the Zero Hunger target in 2030. If recent rates of increase persist, the PoU will rise from 19.1 to 25.7 percent. Latin America and the Caribbean is also off track, even though at a much lower level. Mostly due to deterioration in recent years, the trend will bring the PoU from 7.4 percent in 2019 to 9.5 in 2030. Asia, while making progress, will also not achieve the target by 2030 based on recent trends. Overall, and without considering the effects of COVID-19, projected trends in undernourishment would change the geographic distribution of world hunger dramatically. While Asia would still be home to almost 330 million hungry people in 2030, its share of the world’s hunger would shrink substantially.

Africa would overtake Asia to become the region with the highest number of undernourished people (433 million), accounting for 51.5 percent of the total.

There are large discrepancies in the per capita availability of foods from different food groups across different country income groups. Low-income countries rely more on staple foods and less on fruits and vegetables and animal source foods than high-income countries. è Only in Asia, and globally in upper-middle-income countries, are there enough fruits and vegetables available for human consumption to be able to meet the FAO/WHO recommendation of consuming a minimum of 400 g/person/day. è Globally, only one in three children 6 to 23 months of age meets the recommended minimum dietary diversity, with wide variation among the regions of the world. è Diet quality is negatively affected by food insecurity, even at moderate levels of severity. People who experience moderate or severe food insecurity consume less meat, and fewer dairy products and fruits and vegetables, than those who are food secure or mildly food insecure.

With ten years to go until 2030, the world is off track to achieve the SDG targets for hunger and malnutrition. After decades of long decline, the number of people suffering from hunger has been slowly increasing since 2014. Beyond hunger, a growing number of people have been forced to compromise on the quality and/or quantity of the food they consume, as reflected in the increase in moderate or severe food insecurity since 2014. Projections for 2030, even without considering the potential impact of COVID-19, serve as a warning that the current level of effort is not enough to reach Zero Hunger ten years from now.

To achieve the dietary patterns for healthy diets that include sustainability considerations, large transformative changes in food systems will be needed at all levels. Given the large diversity of current food systems and wide discrepancies in food security and nutrition status across and within countries, there is no one-size-fits-all solution for countries to shift towards healthy diets and create synergies to reduce their environmental footprints.

Political economy: Trade policies, mainly protectionary trade measures and input subsidy programmes, tend to protect and incentivize the domestic production of staple foods, such as rice and maize, often at the detriment of nutritious foods, like fruits and vegetables. Non-tariff trade measures can help improve food safety, quality standards and the nutritional value of food, but they can also drive up the costs of trade and hence food prices, negatively affecting the affordability of healthy diets. 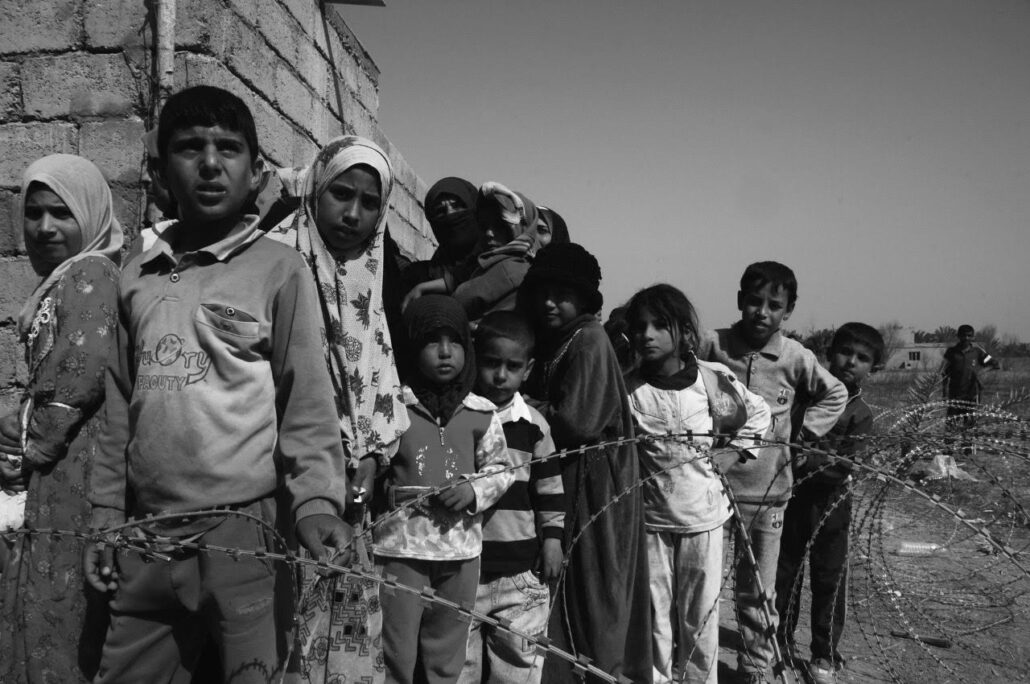 The most recent estimate for 2019 shows that prior to the COVID-19 pandemic, almost 690 million people, or 8.9 percent of the global population, were undernourished. This estimate is based on new data on population, food supply and more importantly, new household survey data that enabled the revision of the inequality of food consumption for 13 countries, including China.

The new estimate for 2019 has revealed that an additional 60 million people have become affected by hunger since 2014. If this trend continues, the number of undernourished people will exceed 840 million by 2030. Hence, the world is not on track to achieve Zero Hunger, even without the negative effects that COVID-19 will likely have on hunger. Preliminary projections based on the latest available global economic outlooks, also presented in this report, suggest that the COVID-19 pandemic may add an additional 83 to 132 million people to the ranks of the undernourished in 2020.

The Goals and Challenges

In 2015 the global community adopted the 17 Global Goals for Sustainable Development to improve people’s lives by 2030. Goal 2 – Zero Hunger – pledges to end hunger, achieve food security, improve nutrition and promote sustainable agriculture, and is the priority of the World Food Program.

The world is making progress but is not on track to achieve the 2025 and 2030 targets for child stunting and low birth weight, and for exclusive breastfeeding, is on track only for the 2025 target. The prevalence of wasting is notably above the targets. Most regions are not on track to achieve the targets for child overweight. Adult obesity is on the rise in all regions. Urgent action is needed to reverse these upward trends. Around 57 percent or more of the population cannot afford a healthy diet throughout sub-Saharan Africa and Southern Asia.

Shifting to healthy diets can contribute to reducing health and climate-change costs by 2030, because the hidden costs of these healthy diets are lower compared to those of current consumption patterns. The adoption of healthy diets is projected to lead to a reduction of up to 97 percent in direct and indirect health costs and 41–74 percent in the social cost of GHG emissions in 2030. è However, not all healthy diets are sustainable and not all diets designed for sustainability are always healthy. This important nuance is not well understood and is missing from ongoing discussions and debates on the potential contribution of healthy diets to environmental sustainability.

To increase the affordability of healthy diets, the cost of nutritious foods must come down. The cost drivers of these diets are seen throughout the food supply chain, within the food environment, and in the political economy that shapes trade, public expenditure and investment policies. Tackling these cost drivers will require large transformations in food systems with no one-size-fits-all solution and different trade-offs and synergies for countries. è Countries will need a rebalancing of agricultural policies and incentives towards more nutrition-sensitive investment and policy actions all along the food supply chain to reduce food losses and enhance efficiencies at all stages. Nutrition-sensitive social protection policies will also be central for them to increase the purchasing power and affordability of healthy diets of the most vulnerable populations. Policies that more generally foster behavioral change towards healthy diets will also be needed.

We can still succeed, but only by ensuring all people’s access not only to food, but to nutritious foods that make up a healthy diet. With this report, all five agencies are sending a strong message: A key reason why millions of people around the world suffer from hunger, food insecurity and malnutrition is because they cannot afford the cost of healthy diets. Costly and unaffordable healthy diets are associated with increasing food insecurity and all forms of malnutrition, including stunting, wasting, overweight and obesity. Food supply disruptions and the lack of income due to the loss of livelihoods and remittances as a result of COVID-19 means that households across the globe are facing increased difficulties to access nutritious foods and are only making it even more difficult for the poorer and vulnerable populations to have access to healthy diets.

It is unacceptable that, in a world that produces enough food to feed its entire population, more than 1.5 billion people cannot afford a diet that meets the required levels of essential nutrients and over 3 billion people cannot even afford the cheapest healthy diet. People without access to healthy diets live in all regions of the world; thus, we are facing a global problem that affects us all. It is clear that the adoption of healthy diets that include sustainability considerations can significantly reduce these hidden costs, generating important synergies with other SDGs.