I have stated in earlier stories that my brother and I hold a “Sitting” every Wednesday night; meditation, séance, spirit contact, whatever one wants to call it. For us, we choose to call it a sitting, and at times we may rise a little higher than usual. At the helm of our sitting, placed on a beautiful chair is a large photo of Swami (Sathya Sai Baba) – in which we dedicate every act to Him.

This experience occurred back in July of 2008 while in meditation.

We have been holding these sittings for quite some time and do have many regular visits from all levels of the spirit realms. On this particular night as I sat in meditation I began to drift deeply and lost all sense of self. In this inner-world I could faintly make out something white with wings far in the distance which seemed to be approaching at a fast rate. As it came closer I could see that it was a man on a beautiful white winged horse flying at great speed. As the horse descended it began galloping towards me until it finally stopped a short distance away.

The man who sat upon the horse had golden armour which covered his chest and shoulders leaving his arms bare. In his right hand he held a golden sword and on the blade was strange lettering. As he slid from the horse I gasped at what I now witnessed, as it was not the horse that had wings but the man himself. Why he came on a horse I had no idea, but later I did come to the full realization of its meaning.

As he stood there he placed his sword on the ground and dropped his armour at his feet. This was all symbolic for my own understanding which would become clear in the years ahead. His wings were so huge it took my breath, and they were not feathers as we know angels to have, but rather they were downing feathers.

His wings were of an off white colour with a touch of grey. As he walked towards me smiling, he was naked except for a short loin cloth wrapped around his waist. I could noticeably see that he had a slight perspiration covering his body, and as if reading my mind he said, (the perspiration shows that I am always in constant battle against the dark forces which is ever close to the earth plane, especially at this time. I am ever helping mankind.) I believe the perspiration was again symbolic for my benefit, in showing that he does indeed remain in constant battle by building up the perspiration. In my mind I was thinking, to see an angel I would have thought to see him in a blinding flash of white light; and again he answered; (I am ever so close to the earth plane doing my work. When I make contact I approach on your level, not to intimidate or cause fear, and I always bring love and protection, I am Michael.) I looked closely at his wings which were so huge they looked abnormal, but beautiful, majestic and Powerful.

If you have noticed the paintings of an angel and looked closely at the wings, Michael’s wings would be (3) times the normal size, abnormally huge and powerful beyond description. And every feather was a ruffled “downing feather,” ruffled because of constant battle on behalf of mankind. His complexion was that of soft bronze; his hair a matted dark brown which slightly covered his eye brows. The back of his hair was just touching his shoulders. His physique was “perfect.” Not bulging muscle, but rather lean and strong in appearance.

Michael told me why he came, (I have come to help you, all you have to do is call my name and I will respond. You will need my help and protection.) “WHY” I asked. He said,(in time you will know.) It seems whenever I ask a direct question, no matter to whom it is, a clear answer is never given. There was more said, but I can not remember in detail. My brother and I now at all times sit with a tape recorder. 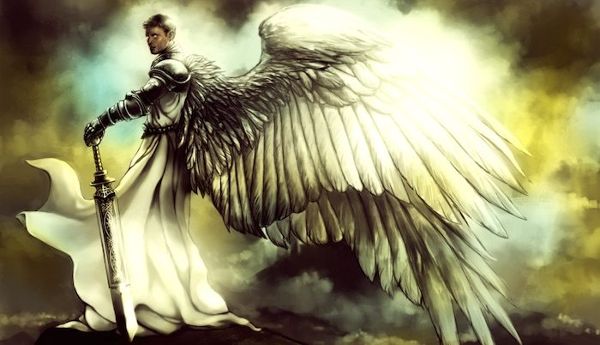 I did notice Michael’s height; when speaking with him he was my own height which is 6’2”. But when he appears in my room, his head nearly touches the ceiling. When speaking with him again at a later date, I asked this question: why is it that you were my height when first we met, but now you are much taller. He replied: (My true height in your terms, is 8 feet. When first I approached you I put myself on your level, face to face, eye contact so not to disturb.) When Michael appears I always see his vibrational colour first, then I tune in to the vibration and see him as he is, (Beautiful). Again I would have thought his vibrational colour to be that of a Highly Bright White, or even of a Gold colour, but no, this was not to be. Michael’s vibrational colour is a (Grey Blue) – a soft majestic colour with a beautiful gentle feeling to it, yet a powerful vibration.

Now this is where it gets very strange. After the meeting with Michael, I had an impulsion to go to a book store. When I first entered the store one book caught my immediate attention even before I saw the title. My attention, or awareness, whatever one wants to call it, was pulled towards it with such force that it caused a slight disturbance within me, and I was for some seconds not sure what was happening. In fact I thought I was going to pass out, (truly.) This force seemed to take control of me, and it caused me to become a little agitated as I didn’t know at first what was happening. It was only until I picked the book up did I then realise why I was feeling the way I did. The moment I took hold of the book, and the instant my eyes fell upon its cover I got the shock of my life, here “He” was in all his majestic splendor, “Archangel Michael.”

I knew without doubt that it was he who lead me to it, and as I checked the price on the reverse side I thought, no, it’s a bit pricey. So I put it back and thought I’ll come back in a few days to bye it. “Well,” do you think I could walk away empty handed, it was impossible. As I tried walking out the door I was instantly pulled back by this inner feeling, as if an invisible elastic band was joined to me and to the book. Whenever I got near the doorway I was instantly pulled back. You may think this is crazy and that I may be making it up, but I tell you this is not the case, this really did happen. Three times I tried to leave the store and three times I was pulled back. The two women running the store must have thought I was a real nut case, because this is how they were looking at me, and I was extremely embarrassed and felt absolutely ridiculous in my actions.

Just to get out of the store I bought the book, then at last I walked out with ease; and I am sure the two women were happy to see me go. The author of this book explains a lot about archangels, and speaks of her own experiences with them.

It is on rare occasions that I may give out certain information that will offer assistance to another when needed. But only if its needed.

In my entire life I have never heard of anyone having visits or experiences from archangels, maybe I just never looked hard enough or enquired about them. So I sent an email to the author of this book. The next day I got back a reply asking me to send details concerning my talk with “Michael.”

The following is my email sent to the author:
Hello from Australia. I hope you don’t think me a crank. I was contacted by Archangel Michael (3) weeks ago and it really took me by surpise, especially in how I saw him. I have never heard of anyone being in contact with archangels, and for myself I thought I would keep quite about it. But today as I walked into a book store, your book seemed to magnify itself out at me. I could not turn away no matter how hard I tried. Honest, I had to bye it. If you have an interest in how I saw Michael, just respond to my email and I will forward all details.

Her reply: Dear Wayne ?, thank you very much for your email. I am always delighted to hear reports about visitations from archangels, so please do describe your experience to me. Also, let me know if I can share it with other people who are interested, I might put it in my monthly News-Letter. When archangels pokes it nose into your everyday life it usually means that you are going to have to re-think what you are doing. And consider how your time could be used for a higher purpose. I wonder whether Michael gave you a specific message. I look forward to hearing from you.
Angel Blessings
Theolyn Cortens
England

Well there you have it, Yes, she did put my story in her News-Letter. And in what Michael stated to me when he said, in time you will know why I have come, and why you will need me will all become clear in the future.

YES; I now do know why. And Yes again, Michael did give me a personal message, and that entire message is (now) fully understood by me.

I am going to offer another story concerning Archangel Michael in who he was in an earthly incarnation long ago. He came for a very specific purpose, and he filled it in his last hour!

The Wedding and the Funeral ~ Extraordinary Story

Autobiography: Lighthouse of the ImpossibleThe Awakening Times February 2018 Issue is out!
Comments: 2