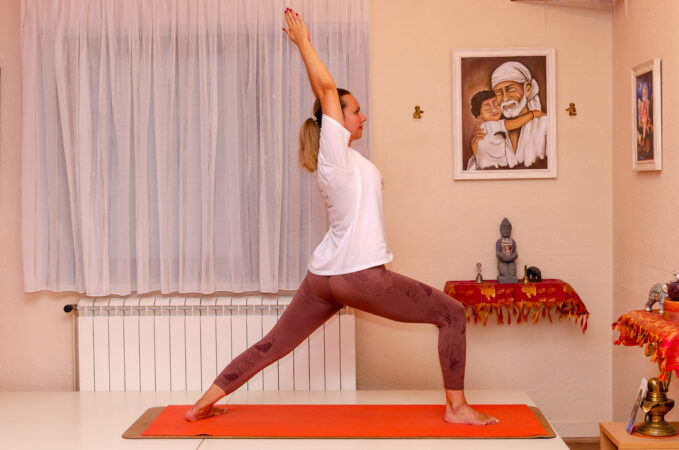 Written by Usha Lakshminarayan of The Himalayan School of Traditional Yoga

The word asana means seat or sit in Sanskrit. In ancient times it probably referred to a seated position when people used to sit in meditation for long periods of time. In the current scenario, the word Asana refers to a position or posture, where we stay focused, yet comfortable for some time. Patanjali describes Asana as ‘sthiram’ and ‘sukham’ meaning stable as well as comfortable in a posture.

In this series, we aim to explore an asana each month, to get to know that asana in depth along with its history and explore different aspects of the asana.

To that end, the Asana for this month is Virabhadrasana

Most asanas have an interesting tale or significance behind it. Virabhadrasana  takes us back to Sati, the daughter of Daksha, who married Lord Shiva, against her father’s wishes. Daksha wanted his daughter to marry someone powerful and not an ascetic like Shiva, but Sati disobeyed him and married Shiva and lived in mount Kailash. Soon after, Daksha organised a great yagna (a fire ceremony) and invited all the important Gods, Kings and Princes but deliberately didn’t invite his daughter Sati and her husband, Shiva.

Sati wanted her father to accept Shiva and their marriage, so she went to the Yagna without an invitation and against Shiva’s wishes. Daksha instead of welcoming Sati insulted her and Shiva in front of all the guests, much to the amusement of everyone attending the yagna. Greatly humiliated and insulted, Sati threw herself into the sacrificial fire and immolated herself.

Lord Shiva, learning of the terrible incident, was grief stricken and enraged. He plucked from among his matted locks and threw it to the ground. A powerful warrior named Virabhadara was therefrom manifested, and he lead Shiva’s army against Daksha and destroyed Daksha and the yagna.

Description of the Asana

Step 1 – Stand with your feet together and spine erect, hands at the side of your body.

Step 3 - On inhale, bend the right knee, as you raise your arms from the front above the head to clasp the palms and turn them upward. The head should be straight and fix the eyes on a point of focus and gaze taking a deep breath in this position.

Step 4 – On exhale, straighten the right leg and bring arms down to the sides of the body.

Repeat the entire process, on the left side.

Variation 1 - Beginners can practice this posture with hands overhead with palms facing each other and looking straight at a point of focus.

Variation 2 - In the second variation the palms can be joined together above the head (in Namaste position) and fix the gaze on a point of focus.