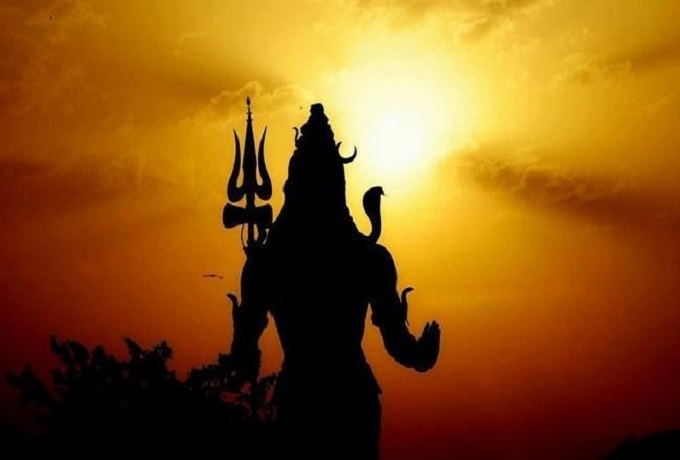 The lunar month which is followed by all Hindu calendars consists of twenty- eight days. Each month has two fortnights. The dark fortnight is the one with the waning moon and the bright fortnight is the one with the waxing moon. The 13th night of the dark fortnight of every lunar month is known as Shivaratri — the night of Shiva. It is the darkest night of the month. Thus we find that there are twelve and sometimes thirteen Shivaratris in a year. However the 13th night of the dark fortnight in the month of Magha (February/March) is known as Mahashivaratri or the Great Night of Shiva. This is a festival which is celebrated all over India. As usual with all Hindu festivals, it has a deep esoteric meaning. The obscure reason behind every Hindu festival or ritual is to give an opportunity to the small, limited, individual ego to expand to its infinite boundless state.

The smaller Shivaratris in all the other months are commonly known as “pradosham” which literally means, “that which removes all sins.” The time for pradosham lies between one and a half hours before and one a half hours after sunset. Pradosham is a bimonthly occasion on the thirteenth day of every fortnight in the Hindu calendar. At this time it is said that the sun and moon are in a horizontal line. There are certain vibrations during this time which help us to remove our negative karmas. The same is the case with Mahashivarati. Shiva is the destroyer in the Hindu Trinity. The Shiva Tattva or his destructive power is supposed to come in closest contact with the earth at these times and especially on the night of Mahashivaratri. This destructive power is invoked in order to destroy the negative tendencies that we have accumulated during the year.

Shiva is the wielder of power! On this day the power he wields over the universe increases hundred fold. His role is not just destruction but “creative destruction.” This means that his destruction has a purpose. It is not mere annihilation but transformation. So, on this Great Night of Shiva we invoke him and beg him to destroy all the blocks in our system that act as impediments in the way of our spiritual progress. Before the night starts we should make a list of our negative tendencies and concentrate on two or three of them and work on them during the long hours of vigil during the night of Mahashivaratri.

The rishis of ancient India were intimately connected with the movement of the planets. They gave us instructions on how best we could make use of planetary positions and dispositions in order to allow our human system to rise to its highest potential. On the night of Mahashivaratri, the planet is tilted in exactly the right angle for people living in the northern hemisphere of the world to feel an upsurge of energy. This energy can either be directed towards spiritual activities or be dissipated in commonplace actions. The Hindu tradition never lost any opportunity to give a push to the individual to accelerate his move towards the divine. Therefore the festival of Mahashivaratri was established to make use of this spurt of energy and give it a thrust in the right direction. For this we are asked to keep awake during the night and remain with our spinal cord erect so as to facilitate the movement of the energy upwards. Spiritual energy always goes upwards through the spinal column.

Mahashivaratri gives us an opportunity to experience that vastness or unlimited energy that Shiva signifies, which is the source of all creation.

The rishis always wove stories around deep spiritual truths in order to make them more palatable to the common man. Their desire was to turn everyone into a yogi and bring out the deep, hidden divine potential in every human being. The esoteric meaning behind Mahashivaratri is camouflaged in the famous story in the Puranas known as the “Churning of the Milky Ocean.”

Once it is said that the devas or gods became very weak and lost their youth due to the curse of the rishi called Durvasa. The asuras or demons took this opportunity to oust the gods and grab the heavens for themselves. The miserable gods went with their tale of woe to Vishnu who comforted them and told them that they would get back their youth and strength by imbibing the “Amrit” or nectar of immortality which could be got by churning the Milky Ocean on which he himself was resting. Of course the devas were totally incapable of taking on such a tremendous task. They were forced to ask for help from their bitter enemies, the asuras. The asuras agreed provided they were given half the nectar, to which the devas were forced to assent. In olden days people used to make butter by churning yogurt. They tied a rope round a pillar and wound the rope round the wooden churn and kept on churning manually until butter rose to the top. Using this principle, the devas used a mountain as a churn and the snake on which Vishnu was lying, as a rope. The devas caught the tail of the snake and the asuras the head and they churned merrily for some days. After some time the snake started getting a bit sick of the whole affair and started to vomit the most virulent poison called “Halahala”. Had the poison fallen to the ground, everything on the earth would surely have perished. Both the gods and the demons were in a panic and prayed to Lord Shiva to come to their help. Shiva, the compassionate one, came immediately and caught the poison in his palms and drank it. But his wife Parvati, not knowing his greatness was terrified that it would kill him and caught his throat so that the poison congealed on his neck and thus his neck turned blue. This is how he got the name “Neelakanda” or the blue-necked one. Thus Shiva became the “Saviour of the World.”

It is common knowledge that one who has been bitten by a snake or taken poison should not be allowed to sleep, so it is said that the devas and the asuras as well as all the sages who had assembled there, kept vigil the whole night extolling Lord Shiva and chanting his names. This was the night of Mahashivaratri.

This is the story told to people in order to encourage them to keep a fast and stay awake the whole night with spine erect. Of course the esoteric secret behind the whole story has been given at the beginning of this article. In olden days people needed some story which would arouse their religious fervour in order to make them follow spiritual instructions. By following these instructions, they would benefit from the deep spiritual and scientific reasons which they could not understand that was underlying the story. This is how the rishis ensured that profound spiritual truths were followed by common people so that they would all get the full benefit even though they did not understand the science behind it.

Vilva leaves, white flowers and ashes (vibhuti) are all special for Shiva. Again the esoteric reason is that these three things have the ability to attract positive vibrations so we are asked to apply “vibhuti” on our upper chakras before sitting for puja or meditation. The vilva leaves and white flowers are always offered to Shiva during his pujas (rituals). The mantra for Shiva is the five- syllabled mantra — Aum Namashivaya.

Many other stories are also told to encourage people to keep the fast and stay awake the whole night. It is said that once a man was lost in a forest and could not make it back to his house so he climbed a tree which happened to be a Vilva tree under which there happened to be a linga (elliptical stone image) of Shiva. Wild animals were roaming around in the forest. The man was frightened of falling down if he fell asleep so he started plucking the leaves and throwing them down so as to keep awake. The leaves fell on the stone image of Shiva under the tree. This happened to be the night of Mahashivaratri and without knowing it, the man had kept a concentrated vigil the whole night and was engaged in doing puja to the linga with the vilva leaves. It is said that in the morning the attendants of Shiva came and gave him liberation!

These stories are told to people in order to encourage them to keep vigil. Even though they don’t know the esoteric reason behind the practice they would still attain a high state of spiritual awakening. Thus everyone was exhorted to keep up the practice of fasting and keeping awake on the great night of Shiva — Mahashivaratri.

This year, Mahashivaratri fell on 4 March 2019