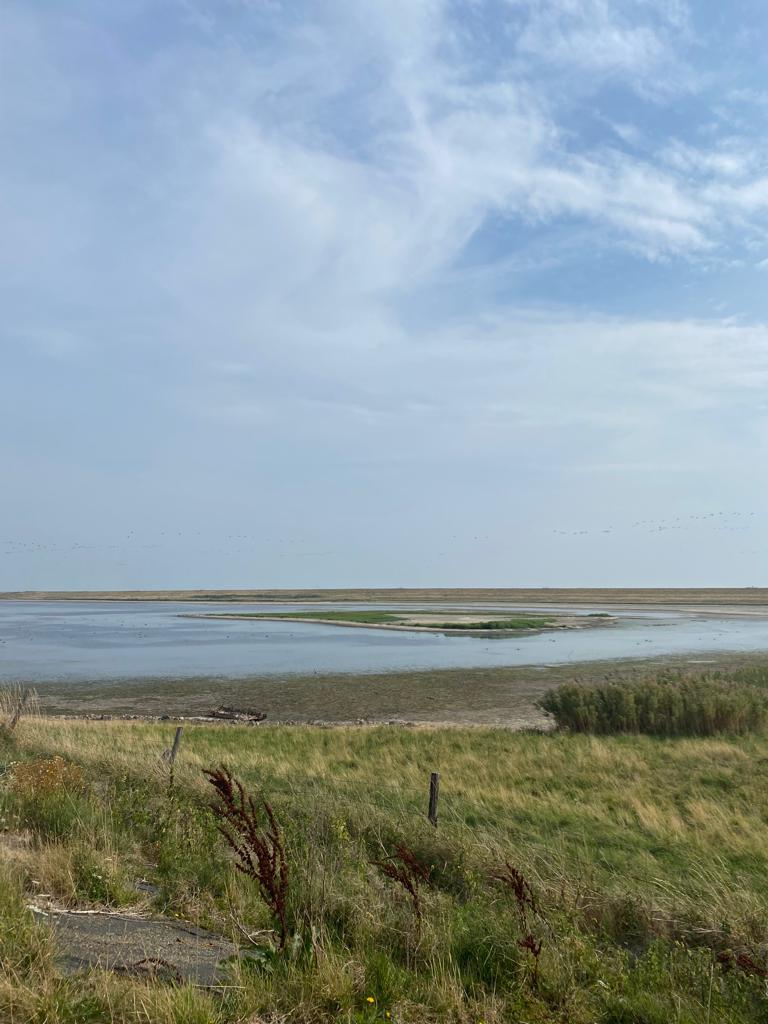 High temperatures across Europe, busy airports, and crowded beaches inspired me this summer to search for relaxing moments at not-so-typical places.

While visiting my family in Belgium I took a day trip to Zeeland, the westernmost and least populous province of the Netherlands. It consists of a number of islands and peninsulas, hence its name means ‘Sealand’.  After spending a few hours at the beach of Domburg, we went to the Oosterschelde (Eastern Scheldt), the largest national park in the Netherlands, founded in 2002.

The Oosterschelde was originally a river estuary. In estuaries, the salty ocean mixes with a freshwater river, resulting in brackish water. Brackish water is somewhat salty, but not as salty as the ocean.

In 1986 the Oosterschelde was closed off from the sea by a storm surge barrier, which still allows the tidal effect to some extent. As a result of the tidal flows, erosion and sedimentation processes take place that result in a varying pattern of salt marshes, mud flats, tidal flats, shallow water, and deep tidal channels. In 2002 this nature reserve received the status of National Park – the largest and wettest in the Netherlands. The unique combination of fresh and salt water and the continuously changing landscape formed a warm welcome for thousands of birds, aquatic animals, and plants.

The flora and fauna in the Oosterschelde National Park are particularly rich. Over 85 different species of waterfowl live there throughout the year. Some stay all year round, while others use the park as a resting place during winter migration: Redshank, Spoonbill, Cormorants, and common Terns. Many geese species like to hibernate here. Due to the tide, many mudflats and sandbanks dry daily, full of fresh food. Large numbers of birds and bird species find food, rest, and a place to breed in and around the Oosterschelde.

When the water is low in the Oosterschelde, many birds forage for their meal on the dried-up mudflats. When the water is high, the birds rest behind the dikes in the inlays and cart fields.. So you can see the birds whether it is low or high water!

The Oosterschelde is also an important area for migratory birds internationally.  The whole of its coastline is closed to humans and reserved for birds. Some birds, such as the Bar-Tailed Godwit, use the Oosterschelde as a stopover on their journey to Africa, where they overwinter, and on the return trip to the breeding grounds. Other birds, such as Redshank, seem to be around all year. Appearances are deceptive – the Redshanks that breed around the Oosterschelde leave for Africa in the autumn to overwinter, while the redshanks that overwinter here fly back to northern regions such as Iceland in the spring to breed there. Some birds fly 18 000 km a year and Oosterschelde is a strategic position where they come and rest.

You can hear geese from afar, as large numbers of them  fill their bellies with grass in winter. They leave again in the spring. Only the brent goose can be found in the Oosterschelde in the summer months.

Even if you are not a birdwatcher, Zeeland is a great place to visit. You can practice water sports, visit historical towns and cities or just inhale the scent of the sea and feel inner peace.

The Dutch are internationally recognized for their engineering projects for flooding control.  With almost 1/3 of the country below sea level, the Netherlands has been protecting its people from rising seas for centuries. Nevertheless, they haven’t forgotten the non-human inhabitants of their land. Recognizing the importance of the Eastern Scheldt for the birds, the Dutch have made sure that these inhabitants can continue to feed and breed in peace and safety in the enclosed areas of the National Park. It is a great reminder that human safety can go hand in hand with animal/wildlife wellbeing. There is enough space and a place for all the creatures in this beautiful world.