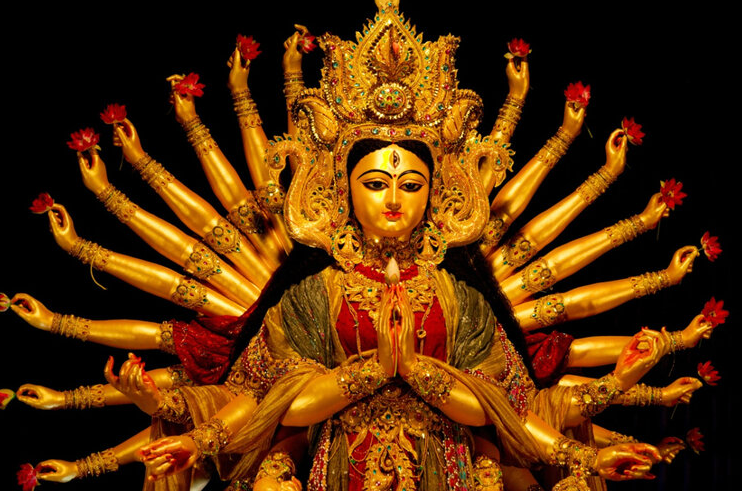 Navaratri means nine nights and in this festival of Navaratri we worship the Divine Mother in her many forms. It takes place in the first nine days of the bright half of the lunar fortnight in the Hindu month of Ashwin, September/October.  This year 2021 it starts on the 7th October and ends on 15th October. The 10th day is known as Vijayadasami or the day of victory and falls on the 16th of October. The Devi Purana gives the story of how the virgin goddess,  Durga killed the buffalo demon known as Mahishasura on the 10th day of victory. The buffalo demon of course is an allegory for abysmal ignorance.

Hinduism believes that the reason behind human birth is to gain liberation from the coils of maya and enter the blissful realm of the Absolute. The festival of Navaratri ensures that this knowledge is never forgotten and helps all Hindus renew their relationship with the Divine Mother every year.

This festival is also known as Durga Puja. It shows how Hinduism has always revered the feminine and strived to empower women through the ages. Unfortunately, with the advent of the Abrahamic religions, masculinity has been extolled so that now we find that women are actually trying to ape men. They wear men’s clothes and demand their rights as equals. This is amazing. Surely, we were not made equal or meant to be equal. Both males and females have different physiques, different roles and different temperaments. Both males and females are unique creations of God. Nature never likes duplicates. Even the five fingers of one hand are totally different and play totally different roles. Then why should women demand equality with men? It is quite absurd. Navaratri is a Hindu festival which extols and proclaims the individuality and strength of the feminine.

Durga, is the virgin goddess. She stands on her own and does not need the support of any of the male gods. She is a true representative of dynamic feminine power at its highest. If only this feminine power was ruling the world, we would not have had all these world wars!

During these nine days and nights Durga is worshipped in her nine different forms but this might be too complicated for most people so we will give the nine different names of the goddess at the end so that devotees can make use of them if they wish.

The Supreme Reality of Hinduism is a formless, immutable, eternal, unborn entity or spirit known as the Brahman. It is the same for all living creatures and underlies both the manifest and unmanifest states of Being. It is an integrated state, that is changeless, indivisible, without distinctions or qualifications and thus utterly beyond human comprehension. It is Pure Consciousness and can only be known through direct experience. The embodied soul is known as the jivatma. It is a projection of the Absolute Brahman. It takes many births and goes through the dramas of many lives until it reaches a point of satiation with the external world and longs to return to its original status. This then is the purpose of life in Hinduism – to return to the source from which we have come. Hinduism gives many methods for having this experience and these paths are known as “yogas”. They help us to transcend the levels of the mind and experience the Absolute.

Hinduism is a way of life, and our ancient sages saw to it that all our rituals and festivals were meant to upkeep this tradition and ensure that we never forget the goal of human life. Consciously or unconsciously these rituals help to nurture that one single aspiration in us, that our culture has been enshrining within itself from eternity.  Even if our conscious minds forget the purpose for which we are born, that purpose will remain imprinted on the level of our subconscious. Thus the Hindu calendar is studded with numerous festivals, all intended to take us back to our roots. This goal is embedded in our genes and carried forward from generation to generation. All our scriptures, epics, ceremonies and festivals are charged with this spiritual goal. They have an esoteric significance that is not apparent to the common eye.

Indian thought is famous for its symbolism and from ancient times the pictorial representation of God took the form of both male and female. The universal form of the motionless Absolute came to be associated with the male and the manifested energy of Nature with the female. To the undiscerning eye, the Brahman and Nature are two completely different things but this is only an apparent phenomenon. Fundamentally they are one, as gold and ornaments made of it, are one.  The Absolute and Nature are not “two” but “two-in-one”. Hinduism has always recognised and accepted these two principles and variously called them by many names as Shiva /Shakti or Purusha/Prakriti.

Just as the tree is latent in the seed, so this universe of names and forms, lies enfolded in this Shakti of the Brahman. She is the Divine Mother who is the womb of all creatures. As Nature, this Shakti manifests herself in multifarious forms, so we personify the Divine Mother in the forms of various goddesses. She pre-supposes all existing forms, past, present and future.  But she is also maya, the illusory power that entrammels us in her web of beauty and mesmerises us into believing that this world which we see before our eyes is real. The jivatma or embodied soul is so fascinated by her beauty that it forgets the purpose for which it has incarnated in a human body.

Seen on the background of eternity, the drama of our lives, enacted on the stage of space and time, is only a show of light and shade, like a TV show. It is only a creation of the mind and like all TV shows it passes, flows and vanishes into the space from which it came. This phenomenon is what Hinduism calls maya – shakti of the goddess who has produced this phenomenal world which has its basis in ignorance of the true nature of reality.

This view of the world as given by our ancient rishis has been corroborated by Quantum Physics. They have discovered that we are connected to every single thing in the cosmos by this one underlying energy field that they call “The Field” and which our rishis called Prakriti. The tiniest bit of matter is not solid as we have been led to believe but only energy in motion. This pulsating energy field is the centre of our existence. Our eyes deceive us into imagining a reality that does not exist in the way we perceive it.  But we are so fascinated by this world which has been created by this enchantress that we forget the purpose for which we have taken a human birth. In order to remind us of this purpose and re-connect with this source of the universal energy of the Divine Mother, the Hindu culture has demarcated two festivals in the year dedicated to the remembrance of that energy.

The Devi Mahatmyam, also known as Chandi Pat or Durgashaptashati, is a deeply esoteric book which we are all encouraged to read during these nine days of Durga Puja. In this scripture Durga slays all the various forms of asuras or negativities that threaten to overwhelm us.

The nine days of Navaratri are meant for reflection and removal of our negative traits and the acquisition of positive qualities. These nine days can be divided into three parts. The first three days are kept for the worship of Mahakaali, the next three days for Maha Lakshmi and the last three days for Maha Saraswati. Some people also worship the Navadurgas or the nine aspects of Durga on each day.

Let us take the first method of worship of the three different goddesses.  Before we can proceed towards our goal of union with the Absolute it is absolutely necessary to remove all the complex amount of negative traits that we have accumulated throughout the year.

For this a certain amount of force may be necessary. So during the first three days the goddess is worshipped as Kaali which is her unconquerable form as Kaala or Time – relentless, all-consuming and indomitable. Time is the only killer! Everything in creation falls a prey to Time. All of us fear Death in its aspect of Time, so Kaali’s form is frightening to behold. It is meant to intimidate those who are not ready to accept the fact that life is a coin with two sides – birth and death!

She is usually portrayed as pitch black with long dishevelled hair falling behind her like a cloak. She wears a girdle of severed arms and a necklace of freshly cut heads. She has a cavernous mouth dripping with blood from her lolling tongue. She has long sharp fangs and claw-like hands with hooked nails. She portrays one of the masks of Prakriti – of Nature giving birth to all beings from her womb, feeding them at her breast and then devouring and assimilating them back into herself!

Kaali’s nature is such that she cannot tolerate deceit and falsehood. Her wrath is immediate and dire. Thus we spend the first three days and nights of Navaratri worshipping her, for only she can remove our negativity and vulgarity.  When we start a garden, the first thing we have to do is to dig the ground and remove all the stones and unwanted grass and weeds from it. This is the job which is given to Kaali so for the first three nights we pray sincerely to her to take away our negative traits even though this may cause some pain.

The next three days are kept aside for Lakshmi, the goddess of wealth, beauty and auspiciousness. She is the one who is lavish with her gifts of all types of good fortune which include positive traits of the mind. In the garden of our mind which has been ruthlessly weeded by Kaali we invite the beauteous Lakshmi to come and sow the seeds of love, generosity, consideration, compassion, gratitude and so on. For this we worship this beautiful goddess and entreat her to come and take her abode in our hearts that have been cleansed of all negativity.

The last three days are dedicated to the enchanting Saraswati- the goddess of learning, arts, science and wisdom. Seated on her vehicle, the graceful swan, she floats through space looking for an opportunity to bless us. During the last three days we beseech her to enter our hearts and fulfil the goal of human life which is to attain the Absolute. In that garden of our mind which has been weeded of all its negativity by the forceful Kaali, and in which the gracious Lakshmi has sown the seeds of positivity, we invite Saraswati, the one who can give us the bliss of union with the Absolute. Only in such a garden can the pure lotus of enlightenment bloom.

This is the esoteric meaning behind the festival of Navaratri which is celebrated all over India. This festival is celebrated twice a year, once in spring and once in autumn. In these following days and nights let us beseech her in her various forms to enter into us and dispel the darkness of the accumulated ignorance of our true nature with the glowing lamp of knowledge which only the she can light for us.

Some people also worship each of the forms of the Nava Durgas on each day of the festival. These are forms and names of the “navadurgas” nine durgas, starting from Shailaputri.