A Revival of Our Tradition and Culture of Food. Part One .

The aim of this article is to present our current situation of different ailments and sufferings and the root cause of all these elements and how to curb the diseases and lead a happy and harmonious life on earth by keeping our ecosystem in balanced way. – A Revival of our Tradition and culture of Food.

First of all we need to have the knowledge about our past culture and tradition. What is staple food! Our staple food must be a Nutrient Rich food which not only fills our stomach but also gives all essential vital components which is required for our metabolism proper, health and ease in our life. In todays’ world it is the time to rethink on where we reached and where we are heading. In this context, we need to have a look at our previous years or ancient cultures and habits they followed and lived a smooth healthy life. When we look at our past, food and life habits occupy a major place. I would like to discuss briefly about our ancestral food heritage and because of these how the ecosystem is well maintained then.

When we are talking about our tradition and culture, it is not correct to talk about only two or three generations. Where I think we need to understand hundreds and thousands of rich heritage and culture which our ancestors followed. In olden years what might be the crops and foods they cultivated and consumed paved way to curb the present unwanted situation of diseases and ailments (non communicable) all over the world. Yes, I am discussing about the Millets also called Siridhanyam by Dr. Kadhar vali also known as Rich Grain or Rich Minor Millet. There is no doubt about that it is our oldest food grains ever known to humans. Millets are highly variable small seeded grass family widely indigenous to many parts of the world as cereal crops for food and fodder.  Coming to the crops and food grains I would like to mention our Puranas and Itihasas clearly mentioned in it the nature and type of food crops used. In Vishnu purana, a term Priyaangu is mentioned denoted as Korralu/Thina/Foxtail millet. In Story of Tirupati Blaji, Little millet or African millet was mentioned as it was given to Balaji by Vakuladevi to heal the wound (Little millet – Chama/Sama). Various types of millets have been mentioned in Yajurveda texts and in various scriptures. There was a discussion in Bible when Jesus and his disciples were on their mission to spread their beliefs and Christianity, it was mentioned about the food they had is the unleavened bread or roti made with the grain which was grown by absorbing the dew or mist from atmosphere and grow under 60 days. 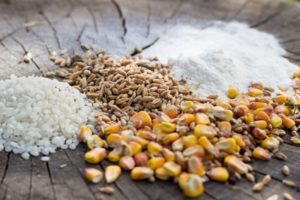 By this we can say the millet they used to have their bread is Browntop millet, certainly not the rice or wheat as these are not grown under 60 days and without large irrigation. This showed that from the ages millets have been on use. Millets have been cultivated and consumed by humans for about thousands of years and these occupied a major place of its own in cultivation as these crops grow well in semiarid tropics and are favourable for its production and short duration under dry land conditions. When we dig out the history of these grass family seeds, the cultivation of millets was greater prevalence in prehistoric period than rice and formed important parts of the prehistoric diet in Bharat, Chinese, Korean, African societies. Around 4000 BCE then population started cultivating millets as staple food. There are different types of small grains or millets cultivated. In India it was known that around 1200 BCE millet cultivation was happened. Different types of millets native Africa and many other had spread to South Asia and the domesticated varieties have been spread beyond their native area to different parts in the world. This is a very brief information of Rich Millets or cereals in the past age. This is because we must recall our past culture to revive our lives in a healthy manner rather a diseased. We forget about our ancient traditions which occupy a vital space in every aspect of life.

In course of time we forgot those practises which our ancestors practised. They led a quality value-oriented life. Today we are claiming the life span has been increased but what we observed is the quality and quantity of life is not in worth speaking.

Now coming to present scenario, our food, health and lifestyle, health of the soil and earth, our environment etc heading towards where! We are moving against the Nature and forgot to live with Nature is the cause of present situation. What is the reason behind the rise in temperature on earths’ surface? We must get an answer. This is not a single issue but connected to every aspect of life on earth. All are well aware of present situation and some are started thinking about it. In each and every family one or more members are stuck by several diseases like dreaded cancer to diabetes etc., irrespective of age, gender etc. All parts of the world population are affected because of fast industrialized cultures, genetically modified crops, processed foods, fast food or junk foods culture, utilization of chemicals in the name of fertilization, pesticides, water in plastics, foods in plastics and aluminium, excessive use of drugs especially hormone related therapies, misleading information on hereditary diseases, contaminated drinking waters, drugs, consumption of mineral oils in the name of edible oils, excessive use or consumption of milk  and milk products of cross bread animals, hybrid crops, vaccination, meat and meat products etc.. etc.., the entire system has been changed drastically over a period of 70 years. Prior to this there is no utilization of chemicals in the soil and in foods also. Our own system of agriculture is totally wiped off. Now we all are living in highly commercialized economic model and different diseases also make fit into the economy model. This situation must be changed. We need to understand the position of our life and the health of earth is in an alarming condition. We lost our Rivers, and almost not only in India, but also in different parts of world, all the water bodies are contaminated and highly polluted by hazardous chemicals like glyphosates. In everywhere we are talking about development. But what we see is the construction of hundreds of multispecialty hospitals and number of hospitals has increased over the past 15 years, dialysis centres, infertility centres etc are the indication of development. According to WHO, Cancer- is the second leading cause of death globally and is responsible for an estimated 9.6 million deaths in 2018. Globally 1 in 6 deaths is due to cancer. Around one third of deaths from cancers are due to behavioural and dietary risks, lack of physical activity, alcohol, environmental pollution. Excessive unscientific utilization of drugs is one of main reason. The patient with one or more diseases suffering with the side effects of which he/she had undergone treatments rather the disease itself. The human race is going to face a serious situation in future if we continue like this. Because of the greed human beings destroying the environment in a large extent that in future we could not get the oxygen also. Rapid industrialization and industrialized products occupied a major space in our lives. We are living in chemical, eating chemical, cultivating chemical, producing chemical and everything is chemical that our soil also lost its fertility. We dispose everything which Nature supplied instead we deposited unwanted non disposable to the earth causing serious troubles to us and other animals and this is going to donate to our next generations.

In the next issue of Awakening Times  magazine we will highlight the problems caused by our own faults.

Author: Dr. Sudha is founder of Anamaya Charitable Trust and Research Foundation in the Domain of Ethnopsychopharmacology – Drug development

Currently doing research on a selected plant to prove as drug in Homeo System Through Anamaya (Trust) and Research Foundation.

The Divine Mother Helps Us to Become VictoriousThe Sept/October Special Edition of The Awakening Times is Out!