Home The Underwater Mystery Of The Yonaguni Monument

The Underwater Mystery Of The Yonaguni Monument 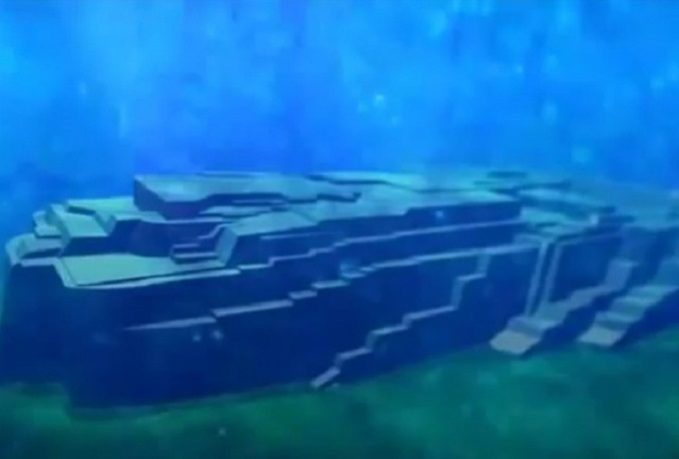 At the westernmost tip of Japan lies Yonaguni Island. Rugged cliffs, gentle capes, and sloping beaches make up the majority of this tiny island nestled between the East China Sea and the Pacific Ocean.

With fewer than 2,000 inhabitants, Yonaguni is known for its distinctive breed of horses and its potent Hanazake, a 120-proof distilled rice beverage. The stunningly clear waters surrounding Yonagunijima are also a popular dive location for those wishing to get up close and personal with the hammerhead sharks living in the reefs surrounding Yonaguni.

The most defining aspect of Yonaguni, however, lies six meters below the surface of the shark-infested waters and appears to have been carved out of the cliffs that extend deep into the ocean. Known as “Japan’s Atlantis,” the Yonaguni ruins were discovered in 1986 by a scuba diving instructor named Kihachiro Aratake while he was searching for a prime diving-with-sharks spot to promote for his tourism company.

Stumbling across it unbeknownst, this great underwater pyramid, and what appears to be a surrounding city, must have been an incredible sight — a monolith with terraced rectangular formations, with steps and columns carved into the sides, squatting dark and mysterious on the ocean floor. The monument closely resembles the Great Pyramids of Egypt, measuring 76 meters long at its base.

More structures were discovered, including what might once have been a temple, archways, and winding pathways of stairs. Gradually scientists determined the sandstone bedrock could date as far back as 20 million years, which would mean any civilization responsible for the impressive stonework would have sprung up around 10,000 years ago.

To further emphasize the fact that this might indeed be Japan’s Atlantis, simple hand-held tools and pottery fragments were also discovered in close proximity and seem to coincide with those dates.

Yet still, the question remains — due to the highly volatile and notorious seismic activity of Japan — is this merely an interesting, naturally formed structure due to an active volcano? Or was this once a beautiful city that disappeared beneath the crystal clear waters after a volcanic eruption or a massive earthquake?

As with every controversial discovery, there are two sides to the coin, represented by two scientific opinions.

Masaaki Kimura is a marine geologist at the University of Ryukyus in Japan. He has been diving at the site since its discovery for over 20 years, and when he first got word of the amazing sunken city, he was sceptical.

Believing the monument to be no more than an amazing natural geological formation, he began diving, and each time he was able to measure and document more details of the amazing structure. Even after over 100 dives, he continues to discover what he believes to be evidence that Japan’s great pyramid used to be a city, prominently positioned on top of the rugged cliffs, that plummeted to its ruin after a catastrophic seismic event.

“I think it’s very difficult to explain away their origin as being purely natural, because of the vast amount of evidence of ancient man’s influence on the structures,” he said.

Which would make sense? This particular area of the globe has long been known for its extreme and constant seismic activity. Japan rests right at the cusp of four (or more) lithospheric plates that shift constantly. Documented earthquakes here date back at least 1,600 years, as well as their companion disasters: tsunamis.

Being home to 10 per cent of the world’s active volcanoes, it would make complete sense that, due to lower ocean levels, this great city was once above ground. It would have sunk and become Japan’s Atlantis after a massive earthquake or tsunami.

Kimura has studied the faces of the great stepped sandstone angles and argues he can make out carvings resembling ancient Japanese mythology, even human eyes. A recent expedition unearthed pottery fragments and parts of tools that may point to the fact that there once were human inhabitants.

In addition to the primitive pottery shards, the carvings in the sandstone appear to have been intentional. To Kimura, some of them resemble Kaida script, just one of many ancient alphabets (based on representational shapes rather than sounds or words) implemented as a communication style by the people of the island before official schools became established.

Kimura fiercely defends his stance that his homeland’s “great pyramid” was once a thriving beautiful city, and who better to make this call than a highly degreed native himself?

Dr Robert M. Schoch, however, could not disagree more.

Schoch first beheld the great monument in 1997, leading an expedition for a non-profit archaeological research group, the Morien Institute. In addition to being called upon to scrutinize the origins of these ruins, he has also conducted field research in Pakistan, the Canadian Arctic, and Egypt. He argues, from a geological stand-point, sandstone breaks along its planes, which naturally results in very straight edges and in this instance simply resembles man-made steps and walls.

“I’m not convinced that any of the major features or structures are man-made steps or terraces, but they’re all-natural,” he noted in his book “Voices of the Rocks”. He argues, for an area so prone to earthquakes and seismic upheavals, the stratigraphy and geology of the sandstone formations are quite usual and had little to no human input.

There’s also another key point others who believe it to be a lost city seem to be ignoring. Had this massive hulk of an underwater “city” been assembled by human hands, it would be made up of many different sections and blocks of rock. Schoch says he can find no such evidence. This beautiful mass is one solid “living” rock that extends from the underwater cliffs and the floor of the ocean. Ocean levels back then were most likely lower, and it is possible the pyramid was plunged beneath the shimmering waters after a massive earthquake and the subsequent tsunami, but due to the breakage patterns of sandstone, the peculiar shapes are little more than a result of nature taking her course, he argues.

Schoch doesn’t deny it is entirely possible the original structure was altered by humans, but the naturally occurring wave and current erosion over millions of years are most likely responsible for the majority of the suspicious right angles and strange markings. Others, such as Patrick D. Nunn, professor of geoscience at the University of the South Pacific, support Schoch’s view that it’s mostly natural.

Nunn has also studied the ziggurat-shaped monument extensively, and other scientists argue, in 2500 BCE, groups of humans were small. Their focus would more likely have been on conserving energy, hunting for food, and travelling in small nomadic groups, rather than contributing much more than a brief alteration to the already intact sandstone. Some even wondered if the Yonaguni Monument may have been a land bridge connecting mainland Taiwan to Yonaguni Island, linked somehow to the lost civilization of Mu, but exactly how remains unclear.

Was it once a thriving bustling city, painstakingly formed by early humans, that was plunged into the sea following a catastrophic event? Or was it the result of millions of years of waves and currents beating against the sandstone bedrock, forming a work of art signed by nature?

The answers continue to elude even scientists, but no matter the method of the Yonaguni Monument’s creation, it remains one of the most beautiful and awe-inspiring dive destinations around the world. Perhaps the secrets to “Japan’s Atlantis” have yet to be unlocked.

Jul 25, 2019Editorial Team
Interview with Sue Jones: The Heart, Science and ConsciousnessIs Big Fear Blocking You From Your Life Purpose?