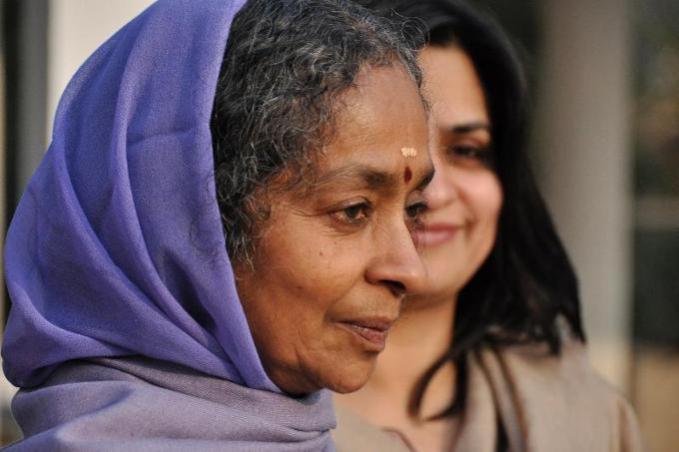 Vanamali is another name for Lord Krishna. It means “the wearer of a garland of wild flowers.” Mata Devi Vanamali is a great devotee of Lord Krishna. She hails from the small pilgrim town called Guruvayoor in Kerala. This town is famous for its temple of Krishna. The idol of Krishna in this town is said to have been worshipped by Lord Krishna himself and by his parents. A lot of miraculous properties are attached to it. Mataji’s family members consider themselves to be vassals of the Lord of Guruvayoor.

Mataji has an M.A Honours degree in philosophy from the University of Madras. She passed out with a first rank and was also a gold medalist. Her professor was T.M.P. Mahadevan who is famous for his books on Advaita Vedanta.

Mataji attended one of the first TM courses, which were run in India at the centre called Nandi Hills near Bangalore. She started a TM centre in the town called Trissur for about ten years. In fact she was the first to teach TM to prisoners in the state prison near Trissur called Viyur jail, which was meant for habituals. Weekly sessions were taken for them and she even started a re-habilitation program. Some were set up in teashops and some were employed in the weaving centre that was started for them. It was at this time that she went to the Andaman Islands to review the jails there and give a program on TM.

Ten years after starting this, Mataji left for the Himalayas. The urge to get away from all that she had known and all that spelt security and comfort to her was too pressing to be ignored. She worked for a year in the Vivekananda School for tribals in Arunachal Pradesh in North India, but this was not what she was after. She wanted to discover the gems, which she felt sure lay deep within the great scriptures of Hinduism. She wanted to find a Guru who would help her in this and allow her to come face to face with Krishna. Though she was deeply grateful to Maharishi for all that he had done for her, her thirst to find a Guru with whom she could communicate and get personal advice was too strong. Karma yoga was not the answer. So she left and went on a pilgrimage all over the Himalayas in the biting cold of winter and at last reached Rishikesh – a holy town on the banks of the Ganga famed for the number of yogis who lived there. After many trials Lord Vanamali found the perfect spot for her to set up an Ashram. Her cousin Mohan took leave from his job in order to help her in this noble enterprise and eventually gave up his promising career and settled down at the Ashram.

Her thirst for a Guru was still not satiated. In this city of gurus, she could find no one who could satisfy her. Night and day her heart cried out to the Lord to send her a Guru. One day the Sankaracharya of Kanchi Kamakoti – Sri Jayendra Saraswati happened to walk past the ashram. In those days His Holiness used to walk barefoot everywhere. He was on his way to the famous pilgrim spots of Badrinath and Kedarnath and was camping in Rishikesh for a few days. He was walking to the bridge known as Lakshman Jhula when he passed the ashram. 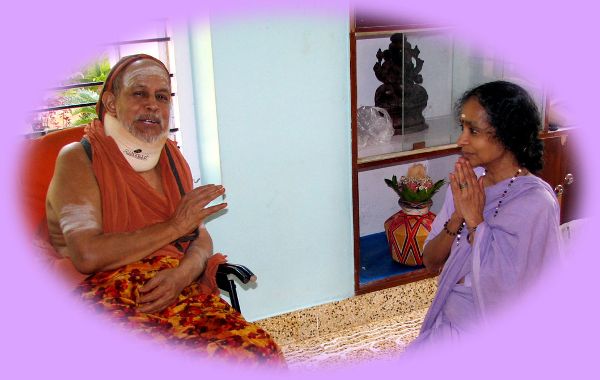 Mataji had been associated with the Kanchipuram Mutt previously and had even gone to Kanchipuram in order to get the blessings of the Paramacharya, who was the Guru of Sri Jayendra Saraswati, before she came to Rishikesh. At that time she had met both the pontiffs and got their blessings. Now when she heard that he was passing by, she ran after him for no obvious reason. Kneeling on the road before him, she begged him to visit Vanamali Ashram. He asked her what the name of the ashram was. When he heard the magic word “Vanamali”, he immediately agreed. On his way back from Lakshman Jhula, he came to the ashram and went to the meditation hall and was quite charmed by everything he saw. He was staying at the Dayananda Ashram at that time and Mataji would go there daily for his puja.

One day when he was giving his usual audience to people, she sat next to him and asked him if he would give her “Mantropadesam”. This is the giving of a sacred formula or “mantra” by the Guru, to one whom he has agreed to make his disciple.. She didn’t know what prompted her to blurt out this request. It was not a pre-meditated request. He didn’t reply but very soon he sent everyone else out of the room and gave her the “mantra” which she had been repeating for years and which was so dear to her heart. Normally a Guru asks a person many questions before he accepts him as his disciple and the disciple has to go through a small procedure of initiation. But in this case there was nothing. It was as if he had recognized her from the very first meeting and was only waiting for her to ask him. He even knew the mantra, which was closest to her heart. It is said that even if the disciple does not know the Guru, the Guru will recognize the disciple and this was indeed so in Mataji’s case. 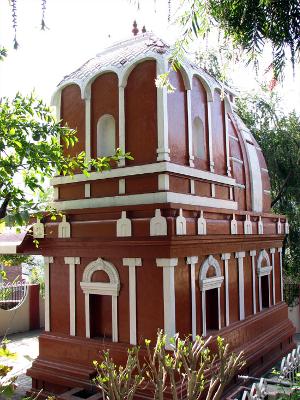 Vanamali Ashram had been started as a private sanctuary and meditation place but Lord Vanamali’s plan was otherwise. One of the first people to come to the ashram was Arvind Burger from the USA. He was so impressed by it that he wrote a letter to the International Yoga Journal describing the place as a paradise etc. Very soon people from all over the world started flocking to the ashram. From the year 1995 onwards Mataji accepted invitations to go abroad. Since then she has taken many retreats in many places like Italy, Germany, France, Sweden, Israel, USA, UK, Singapore, Malaysia and recently Brazil. Mataji is a very good speaker in English.

Her talks are all based on the teachings of Lord Krishna in the Srimad Bhagavad Gita. She has no opinions of her own and is only a mouthpiece for the Lord’s teachings. She has also written many books in English about the various gods of the Hindu pantheon. Of these “Sri Krishna Lila”, which describes the exploits of the Blue god of Vrindavan from his birth to His disappearance from this plane of existence, is a classic, which has never been written before in such detail. Her other books are “Sri Rama Lila”, Sri Shiva Lila”, Sri Devi Lila,” “The sons of Shiva”, “Translation of the Srimad Bhagavat Gita”, “Nitya Yoga” or essays on the Bhagavat Gita, “Gurudeva” and “The Taste Divine” which is a book on Indian vegetarian cooking. She is an excellent cook by the way and this book was brought out by the request of those who stayed in Vanamali Ashram. The Suny Press – New York, has published this book. Sri Krishna Lila has been published in the USA under the name of “The Play of God” and Rama Lila has been published under the name of “The Song of Rama”.

The Ashram is also actively engaged in helping the village children. Every Sunday they are taught songs and the basic rules of hygiene by Mataji and are given milk and biscuits. On special occasions they are given feasts. All of them get school uniforms and sweaters and blankets in winter. New clothes are given for the festival of Diwali and old clothes are also collected and distributed.

Last year the Ashram adopted a small village in the hills called Gajja. This is a very poor Garwal village.  Old clothes are collected from all over the world and distributed. The few government schools are in a very poor state and every year, Mataji distributes sweaters and uniforms. Here also the accent is on helping children. The girls have now been taught to make wild flower cards. These cards are unique and deserve help from people all over the world to sell them since the money from them go a long way in helping these poor villagers. 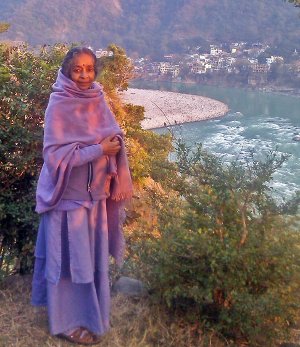 Mataji says that she is not a yogi or a sadhu, but a gopi or vassal of Lord Krishna. She wears only purple since she says it’s the colour of Krishna in transcendence.

When He appears before our eyes He looks blue but in transcendence His colour is purple.

Vanamali Ashram itself is poised on a cliff over-looking the fascinating Ganga as she gushes down the rocks. The nicest thing about Vanamali Ashram apart from its beautiful location is the fact that everyone who goes there feels as if they have come home. The vibrations there are so powerful that no one can fail to be affected by it.

It is also a very well run Ashram thanks to the constant efforts of Mataji’s cousin – Mohanji who sees to it that everything is in order and that the Ashram runs with clockwork precision. Mataji normally resides in the Ashram in winter from October to March. During summer she is either touring or in her mountain retreat in the hills.

Jan 15, 2018Editorial Team
Tantra ~ A Deeply Esoteric Teaching handed down from Guru to DiscipleThe Buddhist Way to be in Love