“I want to be known as a good disciple” – This is how Swami Kriyananda, a direct disciple of Paramhansa Yogananda, always responded, when asked how he would like to be remembered.

Swami Kriyananda epitomised the state of a devoted, dedicated disciple, whose sole aim was to share his Guru’s teachings. Swamiji always displayed love, joy and enthusiasm for life!!! He was creative in his approach as well as practical in his idealism and he liked offering his divine friendship to all.

Apart from lecturing, Swami Kriyananda wrote over 150 books, composed 420 pieces of music in a state of superconsciousness, clicked more than 15 000 photographs, wrote poems & most recently wrote 2 movie scripts based on Ananda and on his Guru.

He was born into a Catholic American family, as James Donald Walters on 19 May 1926 in Teleajen, Romania.

In 1948, at the age of 22, Swami Kriyananda (J. Donald Walters) came across “Autobiography of a Yogi” in a New York bookstore and after reading it, he took the first available bus and travelled for four days and four nights all the way from New York to California.

On meeting Paramhansa Yogananda at the Hollywood Church in Los Angeles on 12 Sep 1948, to his own surprise, the first words he uttered were, “I want to be your disciple!”

A long conversation ensued, during which Yoganandaji told him, “Divine Mother told me to see you. I do only what God tells me to do.” After further discussion, Paramhansa Yogananda accepted Swami Kriyananda (J. Donald Walters) as His disciple.

Paramhansa Yogananda told him, “Your life is to be one of intense activity and meditation. Your work will be lecturing, editing and writing. You have great work to do.” He was lovingly called ‘Walter’ instead of ‘Walters’ by his Guru.

Soon after he joined, he was appointed as head of the monastery and later on he worked along with Yoganandaji on the editing of His commentaries on ‘The Rubaiyat of Omar Khayyam’, ‘The Bhagavad Gita’ and ‘The Bible’. Paramhansa Yogananda also authorized him to teach in His name and to give initiation into Kriya Yoga.

It was at a garden party on July 31, 1949 that Paramhansa Yogananda gave a talk that changed the course of Swami Kriyananda’s life. 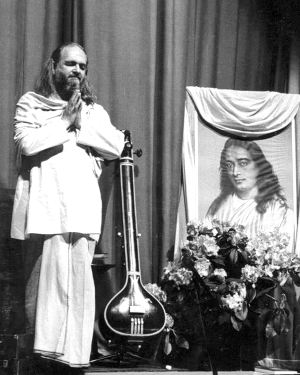 “This day marks the birth of a new era. My spoken words are registered in the ether, in the Spirit of God, and they shall move the West.
“We must go on — not only those who are here, but thousands of youths must go North, South, East, and West to cover the earth with little colonies, demonstrating that simplicity of living plus high thinking leads to the greatest happiness!”
—Paramhansa Yogananda, Beverly Hills, California, July 1949

“Moved to his core” by the tremendous energy with which Yoganandaji made his pronouncement, Kriyanandaji later wrote: “Deeply, I vowed that day, to do my utmost to make His words a reality.”

Since his youth, two things had been very dear to Swamiji:

One was to find God and the second was to share God’s love and joy with everyone – to bring them to Him.

The opportunity to do so came in 1967-68. With the help of a few friends and many miracles, Swami Kriyananda was able to purchase a small piece of land in the Sierra Nevada foothills near Nevada City, California.

He worked hard conducting classes on Raja Yoga weekend after weekend to generate money to develop the community there. He did not keep any money for himself and for years he never got a salary, nor did he keep the royalties from his books. He gave it all to building Ananda. He was a leader who let people unfold as per their own inner nature and let them be creative and learn through their own experiences. He believed too many rules kill the free spirit in people.

Putting God first in everything is the basis of Ananda – living in God, living for God and loving and serving Him in all!

Two of the foremost guiding principles of Ananda are:

“Jato Dharma Tatta Jaya – Where there is adherence to dharma [right action], there is victory.”

“People are more important than things.”

Swami Kriyananda took the ancient teachings of Raja Yoga and made them practical and immediately useful for people in every walk of life. His books and teachings on spiritualizing nearly every field of human endeavour include business life, leadership, education, the arts, community and science.

Living in harmony with nature and all its beings

“Often have I felt Master’s smile in my heart on seeing His ‘world brotherhood colony’ dream become a material reality. His blessings on the land – an almost tangible aura of peace – are felt by everyone who comes here.”

“The spiritual energy that is developing here extends far beyond Ananda’s boundaries. Thousands in America and abroad find in Ananda’s example the inspiration and the practical direction for spiritualizing their own lives.” 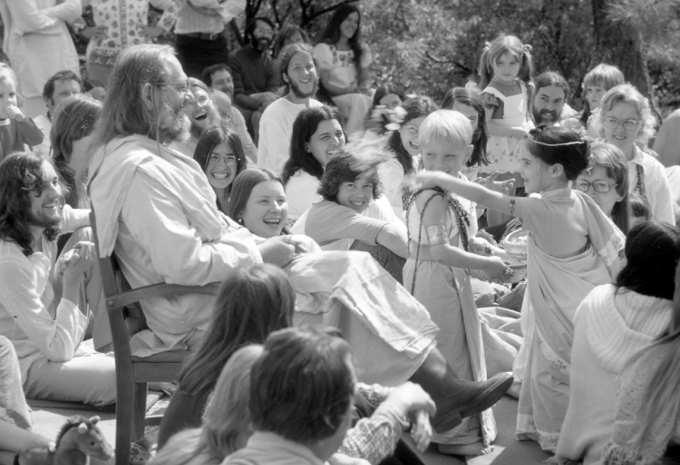 There are now 10 Ananda communities worldwide. They provide a supportive environment of “simple living and high thinking” where over 1,000 full-time residents live, work, and worship together.

A variety of Ananda-owned and private businesses form the economic backbone of the community.

The Expanding Light Retreat, Crystal Clarity Publishers, The Living Wisdom School, and a grocery store are among the activities on the rolling 900 acres in the rural Sierra Nevada foothills.

There is also a Yogoata Dairy Farm at Ananda Village. “The goats have plenty to eat on the land here, for we believe in sustainable feeding. And their babies are allowed to suckle & feed for as long as they want all day; we only milk them for what’s left over, so it’s a humane system.”

In 2009, Swamiji created a new order, The Nayaswamis saying it would be – “A new model based on positive aspects of renunciation – rather than the traditional world-negating approach. It is intended for people from all walks of life, married or single, who are committed to finding God, and is open to people of every religious affiliation.” Seekers can take the vows of a Pilgrim, Tyagi, Brahmachari or Nayaswami depending on their inner devotion and sadhana over the years.

Other Ananda communities have developed over the years to include Ananda Palo Alto, Ananda Sacramento, Ananda Portland, Ananda Seattle, Ananda Los Angeles, Ananda Laurelwood (also a college), Ananda Assisi in Italy, and Ananda India in Delhi NCR & Pune. Each community has a spiritual focus (a teaching center and a temple) and a community (homes where members live).

People were touched by the love, joy and sweetness that Swamiji exuded.

In the final years of Swami Kriyananda’s life, he often travelled between Italy, India, and America, giving many lectures and spreading Master’s teachings around the world.

“For over 50 years, Swami Kriyananda has shed a spiritual and reflective light into the world, across continents and into the lives of individuals. We thank him for his many accomplishments and for sharing the life and teachings of yogi Paramhansa Yogananda.”