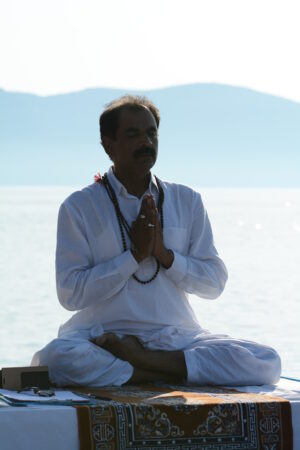 The Himalayan School of Traditional Yoga came into existence due to one man’s yearning and Mohanji great vision. The Late Yogacharya Sanjay sir had met Mohanji and in the course of the conversation Sanjay sir was speaking to Mohanji about his passion for Yoga and how he wanted to share his knowledge and spread the benefit of yoga to the world but is frustrated about his inability to do so. Mohanji heard him patiently and told him that he will give him a platform to realise his dream of taking yoga to the world.  Mohanji had felt for sometime authentic traditional yoga which stood the test of time was getting diluted.  He wanted the original form of traditional yoga which has been around thousands of years ago   be brought back. In a nutshell the seed for HSTY was born there.

Traditional Yoga was initially introduced in global platforms in all Mohanji programs and Retreats. Yoga was practised to start the day in all these events.  The response to traditional yoga was tremendous. Sanjay sirs unique way of conducing the programs with passion and dedication, his introduction of postures, Pranayama and meditation along with chanting in his own inimitable style became hugely popular. People had amazing experiences and transformations, they felt the calmness, serenity and peace which yoga brings about.. There was a huge demand from the participants to learn authentic yoga and practice regularly thus the Himalayan School of Traditional yoga was formed under the guidance of Mohanji Foundation with Sanjay sir as a founder member. HSTY was registered with Yoga Alliance a reputed body known globally which gave our students the platform to teach yoga to people all over the world. Later HSTY was also registered with the Indian Yoga Association.

We had our first Yoga Teacher Training program in Ganeshpuri, a spiritual centre near Mumbai with participants from all over the world. The training was a huge success. When we were planning our second program we lost Sanjay sir in a tragic accident. It was a great blow to all of us but the sense of purpose to spread authentic yoga all over the world drove us to soldier on thanks to the strong and silent support of our founder Shri Mohanji.

What is traditional Yoga and what is different about HSTY than other schools you may ask.

HSTY believes yoga is a way of life and it transforms people.  One has to have an inner transformation along with the external one. Yoga should make a person healthy and strong both internally and externally. Patanjali who brought yoga to the world talks about this aspect in his Yoga Sutras. We believe in the tenant that yoga practitioners transform as yogis. The transformation is gradual but can be achieved with consistent practice and awareness. Our courses are designed in such a way that the principles of Ahimsa – Non-violence in Thought, Word and action, Love and compassion towards all species, accepting Change as the only constant, inner and outer stability, the steadiness of mind and healthy emotions are practiced. All these are inspired by Patanjali yoga sutras and other traditional yoga texts.

All our programs have roots in traditional texts but adapted to modern times without diluting the content. We believe the obsession with Form which is the current trend is not Yoga but merely exercise. There has to be an inner alignment of Body, Breath, Mind and soul which helps us to face any situation or tribulations with equanimity.

We are planning short-term and long-term courses that include not only Asanas and Pranayamas but also Therapy, Chanting and Meditation, which helps us to align with our inner self.

HSTY have brought out two DVDs for beginners and Advanced which people can see and practice at home. Recently we have published a book on Yoga, which is very user friendly. It’s very easy to read.  It’s a step-by-step account of key Asanas for both beginners and advanced practitioners.

Our future plan is to conduct courses on Yoga Therapy, Advanced yoga practice, Chanting and meditation along with our Teacher Training courses. Our new Chief Officer Dr. Rishikesan is a scientist and under him we are planning a Research wing to publish papers. These papers will help to authenticate and establish the relevance and need for yoga in these trying times. We have a lot of ideas and plans to bring yoga to everyone which ever part of the world they are hence we have miles to go before we sleep.

Our deep conviction in the relevance of yoga which is the need of the hour coupled with our consistent effort to reach yoga to one and all will bear fruit to have a world that is stable with Non-violence, love and compassion as its core character.