Home The July Edition of The Awakening Times is Out – Pyramid Special!

The July Edition of The Awakening Times is Out – Pyramid Special! 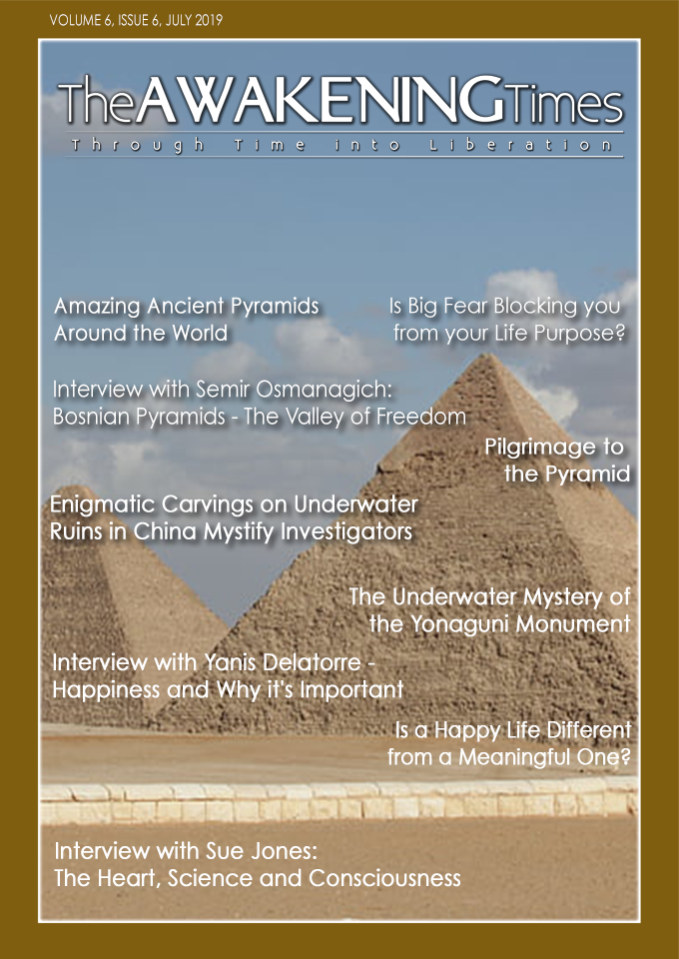 The July issue of The Awakening Times is dedicated to the great pyramids around the world.

Read on to learn more about how pyramids have been found around the world with ancient histories and several mysteries that are being unravelled over time. In a free-ranging interview, Dr Semir Osmanagich, an archaeologist who discovered the Bosnian Pyramids, sheds light on the mystery of the Bosnian Pyramids and the idea of pyramids as energy machines. Learn more about mysterious carvings and underwater pyramids in China and the mystery of the Yonaguni Monument in Japan. Beyond the pyramids, this issue also has articles that make you introspect on the meaning of life, and how facing fears head-on can be a transformative experience.

We hope you enjoy reading this July issue. May it enlighten and awaken your month.

Have a look at our inspiring articles for the July Edition!

Amazing Ancient Pyramids Around the World

While we are familiar with Pyramids in Egypt and Mexico, the truth is that these structures are not confined to these two countries. There are more than 1000 pyramids in Central America alone. There are 300 Pyramids in China and over 200 Pyramids in Sudan. Egypt boasts around 120 Pyramids. Why is it that we have found thousands of Pyramids scattered across the globe, and more importantly, why are so many Pyramids eerily similar? We bring you the list of some great pyramids with awesome histories around the world that you may never heard of before.

Is Big Fear Blocking You From Your Life Purpose?

Read the inspiring life story of Dr Wayne Dyer and what happens when you face your fears and how it can change your life forever. He himself took a big chance to find his life purpose when he left his tenured teaching position at St. John’s University in New York and made the decision to do it alone as a self-employed writer.

Interview with Semir Osmanagich: Bosnian Pyramids the Valley of Freedom

This intriguing interview with Dr Semir Osmanagich, an archaeologist who discovered the Bosnian Pyramids, sheds light on the mystery of the Bosnian Pyramids. Dr Osmanagich explains how it all started, what the reaction of the public was, the whole idea of the pyramids as energy machines and how they cope with system and government restriction.

Pilgrimage to the Pyramids

Enjoy this memorable experience at the Bosnian Pyramids which had mystified effect on one of the participants, leaving her exhilarated and healed. Find out more about these extraordinary constructions one of which is proved to be around 29.000 years old.

Discover an underwater pyramid more advanced than the Egyptian Pyramids hidden in the Fucian Lake in China featuring mysterious carvings in the stone. Find out how old this architecture complex is and why such a large city left no trace in historical records.

The Underwater Mystery Of The Yonaguni Monument

A temple, archways, and winding pathways of stairs date as far back as 20 million years -  is this merely an interesting, naturally formed structure due to an active volcano? Or was this once a beautiful city that disappeared beneath the crystal clear waters after a volcanic eruption or a massive earthquake? Find out more about “Japan’s Atlantis” the Yonaguni ruins discovered in 1986 that lies below the Yonaguni Island in Japan.

Interview with Yanis Delaterre - Happiness and Why it's Important

In this beautiful interview an author of “The Happiness program” in France, Yanis Delaterre, tells us more about his happiness program, how it started, where he found the inspiration, what the program consists of, who can attend it and what two main obstacles on the way to happiness are.

Is a Happy Life Different from a Meaningful One?

Find out what makes life worth living. Is it a life filled with happiness or a life filled with purpose and meaning? Is there even a difference between the two? What is happiness, anyway? Is there happiness without pleasure? Can you have it all? This article can help us ask ourselves the right questions and determine where we should invest our energy to lead the life we want.

Interview with Sue Jones: The Heart, Science and Consciousness

Enjoy this amazing interview of an extraordinary woman, known for her research in mental mapping strategies in children. Find out about her exploring beyond scientific boundaries, a disease which helped her see things from another perspective and become a healer,her special approach for children and compatibility between channeling and science.

Jul 25, 2019Editorial Team
Amazing Ancient Pyramids Around the WorldWhat is the importance of Selfless Service?