Home The Awakening Times January 2017 Issue is out!

The Awakening Times January 2017 Issue is out! 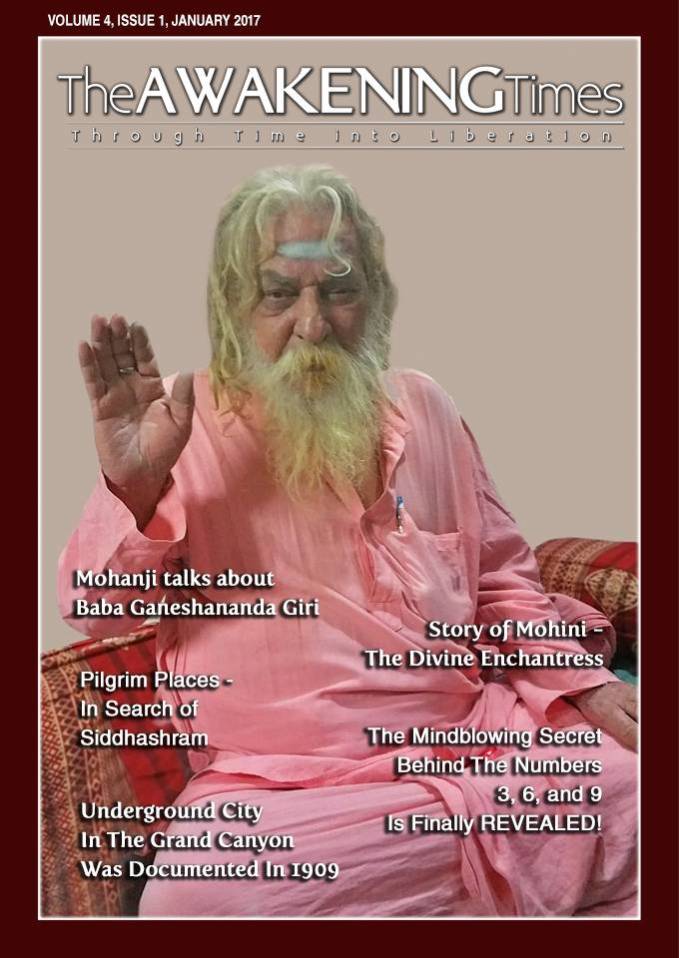 Get our latest January 2017 issue packed with inspiring stories that aim to guide you on your spiritual journey to total liberation and highest truth.

January issue of The Awakening Times is dedicated to the "Boy who walked with Sai Baba", a great Master called Ganeshananda Giri who recently entered Mahasamadhi. Follow the story of a young boy who got lost in his early childhood, but found all he could have ever wanted and more in the lap of Shirdi Sai Baba, eventually becoming a beacon of selflessness, devotion and service.

Enjoy reading about Mohanji’s meeting with Ganeshananda Giri and how Shirdi Sai Baba orchestrated the same; Find out more about the living subtle presence of Ganeshananda Giri through a beautiful inner experience sharing by Monnie from USA; Immerse yourself in exciting uncovering of secrets like the secret behind the numbers 3, 6, and 9 which the genius scientist Nikola Tesla, the Master of free energy, was clearly aware of; Uncover the secret link between Egypt and Nile and USA and Colorado and what the mummies found in a mysterious cavern in Grand Kanyon convey; Find out more about the sacred Himalayan location called Siddhashram, one of those places one can get to only when the divine call comes; Learn why human intervention in spirit matters is sometimes the only way out for the trapped souls; Find out who was Mohini, the Divine enchantress, and how and why she was created.

We hope you enjoy our latest issue. May it enlighten and brighten your month!

Enjoy this insightful spiritual experience sharing about helping a trapped soul, a knight caught up in a dimension of his own making which kept him from moving outside of it, and prevented others from higher realms to communicate with him. Human intervention in spirit matters is sometimes the only solution, a great opportunity to serve for those who are spiritually attuned and open.

Is it true that the genius scientist Nikola Tesla, the Master of free energy, pushed the boundaries of science and technology by uncovering the profound secret behind numbers 3, 6 and 9 – by recognizing in them a vector from the third to fourth dimension and secret key to free energy. Find out from the simple and mind-blowing explanations in this text what makes number 9 represent the Universe itself, beyond all duality.

There are certain places one can get to only when the divine call comes. No map, signboard or planning will lead you there. In this beckoning travelogue Gautam Dhar briefly describes his experiences upon reaching Siddhashram at Sitalakhet, associated with Hariakhan Babaji, and several other sacred Himalayan locations blessed by the siddhas of the past and present.

The Boy who walked with Sai Baba

Meeting a genuine Master, that too one who actually lived with Shirdi Sai Baba as a small boy, is a tall order. Learn how this blessing happened to Mohanjii when least expected. Learn more about the ways in which Shirdi Sai works through people, until their devotion, selflessness and purity flower into magical beauty that continues to shine forth. Find out what is one to focus on in order to attain liberation while living and/or while leaving.

Allow yourself to be inspired by a life story of great soul Ganeshananda Giri, a Master who left his body recently, in April 2016 after being a beacon of service and selflessness for 105 years. He was the "Boy who walked with Sai Baba", a blessed boy who got empowered by Shirdi Sai Baba to serve as his instrument. Follow the story of a young boy who got lost in his early childhood, but found all he could have ever wanted and more in the lap of Shirdi Sai Baba. He attained Mahasamadhi after erecting the last temple dedicated to his beloved Shirdi Baba in Chennai, south India but his story lives on, as well as his subtle presence.

Story of Mohini – the Divine Enchantress

The stories about gods and goddesses offer profound insights to be contemplated on. Learn how and why Vishnu manifested out of himself the form of Divine Mother called Mohini, who was so attractive that she could enchant and trick the demons in order to grant success to the celestials. The stories of hear beauty spread far and wide, so much so that even the Lord Shiva ventured to meet and embrace her.

Underground City In The Grand Canyon Was Documented In 1909

A discovery of a mysterious cavern in Grand Kanyon made by a member of Smithsonian Institute throws further light on human evolution and prehistoric ages. Mummies that were found in this cavern are a solid proof that the race which inhabited this mysterious cavern, hewn in solid rock by human hands, was of Oriental origin or possibly from Egypt tracing back to Ramses. The legends of Hopi Indians shed further light about this mystery of the prehistoric peoples of North America, linking Egypt and the Nile and Arizona and the Colorado a good many thousands of years before the Christian era.

Jan 15, 2017Editorial Team
THE LOST KNIGHT – Story of a LOST SOUL The End of the Aether