Home The Awakening Times February 2017 Issue is out!

The Awakening Times February 2017 Issue is out! 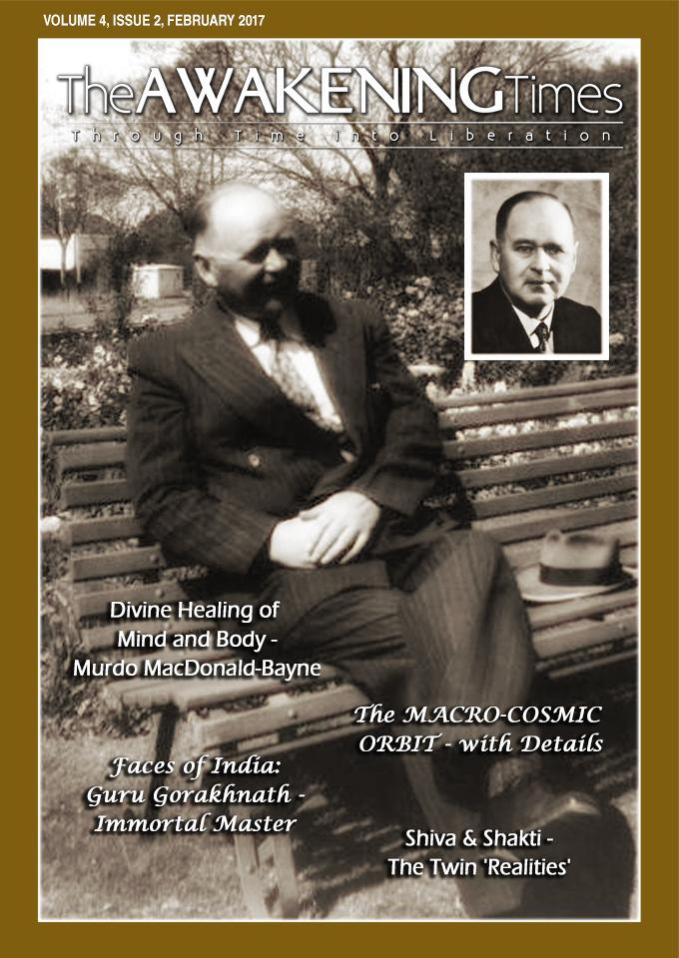 Get our latest February 2017 issue packed with inspiring stories that aim to guide you on your spiritual journey to total liberation and highest truth.

February issue of the The Awakening Times explores various topics of interest related to spiritual awakening: Meet  Dr. Mac (Dr. Murdo MacDonald-Bayne), one the greatest ever interpreters of the Inner Mysteries of Jesus Christ, a great writer, lecturer and healer; find out more about the life-transformative experience of mighty Presence during Dr. Mac’s transfiguration into Christ, and the ways in which he spread his teachings as ‘impersonal direction’, never claiming divine or even guru status; enjoy the content of a profound telepathic message from a Native American Master ‘White Eagle’ which remains relevant to all humanity.

Find out more about The Aether (ether) and whether it was appropriate to completely remove this metaphysical 5th element from the science and science education; learn more about the legendary Guru Gorakhnath, the founder of the Nath Sampradaya and Siddha tradition, closely associated with Mahavatar Babaji; learn all you need to know about the essentials of the whole body Chi-flow practice called the Macrocosmic Orbit practice; immerse yourself into the eternal dance of Shiva and Shakti, gaining profound insights about the twin reality of dynamic Energy (Shakti) which is controlled by the perfectly still Consciousness (Shiva), which cannot express itself but through the Energy – learn when and how they are realized as One.
All this and much more – from your TAT team, in dedicated service of spiritual awakening.

We hope you enjoy our latest issue. May it enlighten and brighten your month!

Enjoy a beautiful experience sharing by Rev. Wayne Farquhar whose astral experiences helped him face his deepest fears and realize that he is loved and protected by the Masters and Divine always. The profound telepathic message he received from a Native American Master called White Eagle is relevant for all humanity.

Meet Dr. Mac, a humble Scottish man who rose to the heights of spirituality through many tests of life, mastering telepathy, leaving body at will, receiving messages from past and living Masters, delivering the ancient knowledge with might and presence that brings about transformative experiences. This brilliant lecturer, healer and writer founded The College of Universal Science in South Africa in 1940s and through his Ministry of Love and Healing his teachings spread world-wide.

Dr. Murdo MacDonald, recognized by thousands of his contemporaries to be the greatest ever interpreter of the Inner Mysteries of Jesus Christ, was not only a great writer, lecturer and healer, but also able to deliver direct life-transformative experiences as well. In this captivating text Ms. Bagot-Smith shares her experience of Dr. Mac’s transfiguration into Christ. The tremendous, vibrating force of the Presence of the Master that was felt was so strong that it never faded from the hearts of those who were fortunate to be present there and then.

Rebuilding the Future: the Universal Science Group in Post-War Melbourne

The alternative self-help spiritual teachings and healing methods of Dr. Murdo MacDonald from Scotland were like a southing balm during physical and mental recuperation of the post-WW2 generation. After having mastered various yogic techniques, Dr. Mac travelled far and wide - from Europe, South Africa, USA and Tibet to Australia, spreading his teachings as ‘impersonal direction’ to his followers, never claiming divine or even guru status.

Immerse yourself into contemplation about the eternal dance of Shiva and Shakti. Find out how Energy is controlled by consciousness (Shiva) and Consciousness cannot express itself but through energy (Shakti). May all sincere spiritual seekers attain the highest blissful state where separateness is no more and the twin realities of existence, Shiva (the male principle, the unknowable silence/universal consciousness ordering all things) and Shakti (the feminine principle of invisible power which is the producer of all things) become one.

Guru Gorakhnath, or Shiva Gorakshanath, the founder of the Nath Sampradaya and Siddha tradition, has been referred to in many ancient scriptures, legends and mystic tales and by many renowned masters. There are innumerable legends about Guru Gorakhnath, though there are no historical facts associated with events in his life. He is mentioned in reference to Adi Shankaracharya (8th century), with Kabir (15th century) and the famous immortal Kriya Master - Mahavatar Babaji. It is stated that the nine Naths and 84 Siddhas are all human forms created as yogic manifestations to spread the message of yoga and meditation to the world.

The MACROCOSMIC ORBIT – with Details

In this hands-on article learn all you need to know about the essentials of the whole body Chi-flow practice called the Macrocosmic Orbit practice. While the Macrocosmic Orbit will work well with standing and moving practices it is best to first practice it in a relaxed sitting position which is most convenient for reaching deep levels of this practice.

The End of the Aether

For thousands of years, the Aether (ether, æther, aither, the “quintessence” or the 5th element), a field which connects and permeates all things, was an essential facet of both the philosophy and science around the world. The Aether played a central role in our framework of understanding natural phenomena in the universe all the way up until the turn of the 20th century. From Descartes and Newton to Albert Einstein, the role of Aether was continuously debated. Read more about Einstein’s explanation of Aether and find out for yourself whether it was appropriate to completely remove this ‘metaphysical’ 5th element from science and science education.