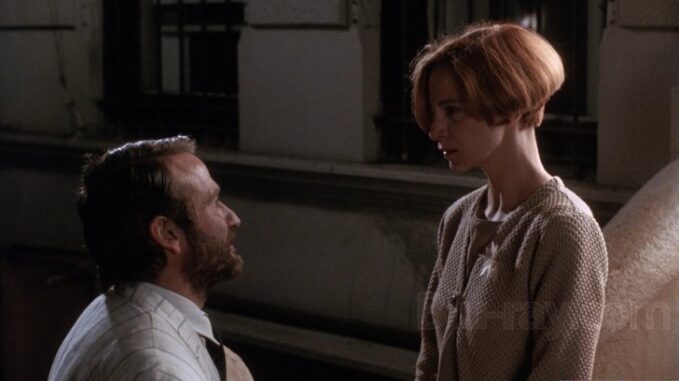 The Fisher King is a comedy drama by director Terry Giliam, produced in 1991. Jack Lucas (Jeff Bridges) is a radio "shock jock" in New York City. One day he takes a call from a listener who feels sad about being rejected by a woman in a "yuppie" restaurant. Jack tells the caller to put it out of his mind; that he'll never fit in with that set. Later that day, Jack hears on the news that there was a mass shooting at the "yuppie" restaurant, and the caller from earlier that day was the shooter.

Jack blames himself for the man's unraveling. Three years later, he is no longer on the radio and is terribly depressed and drinking hard. He lives with a video store owner called Anne (Mercedes Ruehl), working in her store part-time. One night Jack picks a fight with her and tells her that he is only with her for the sex. Anne storms out and Jack also leaves, bottle in hand, so that he can continue drinking. He is mistaken for a bum and he ends up under a bridge contemplating suicide, when he is attacked by some teenagers. The assault is interrupted by a vagrant (Robin Williams) wielding a bow and arrow and this knight, along with his retinue of bums scare the teenagers away. Drunk and confused, Jack ends up spending the night in the homeless man's basement dwelling.

The next morning the bum introduces himself as "Parry", a knight on a sacred quest to find the Holy Grail which, he is convinced, resides in a billionaire's home on the Upper East Side of Manhattan. Parry is convinced that Jack was sent to help him. Jack bluntly refuses to help and he leaves. On his way out, he comes across the owner of the building, who allows Parry to live in the basement. He tells Jack that Parry was a professor in medieval studies and had an apartment in the building with his wife, until she was murdered in the shootout at the "yuppie" restaurant 3 years prior. After his wife's death, he went into a catatonic state. After he came out of it, he was “Parry”. Feeling responsible, Jack decides to help Parry, hoping that it will ease his guilt. Later that day, Parry dragged Jack to see a girl called Lydia (Amanda Plummer), on whom Parry has a crush. He opens up and tells Jack about his feelings for her when he has a hallucination of a terrifying medieval red knight chasing him and flees.

Later as both men lay the great lawn of Central Park, Parry narrates the story of the Fisher King, who once possessed, then lost the Grail and was feeling very old and depressed. The king is saved by a passing fool who gave him a drink of water out of the Holy Grail. On hearing the tale, Jack realises that he needs to help Parry, in order save himself.

With the help of Anne, Jack arranges for Lydia to come with them to a double-date dinner. Jack and Anne clean Parry up; dress him in a nice suit and off they go to a Chinese restaurant for dinner. The matchmaking is a great success. Later that night Parry walks Lydia home and convinces her of his love. Just then, the terrifying red knight appears again. Beyond terrified, he flees again and ends up under the Manhattan bridge, where he is brutally attacked by the same teenagers that attacked Jack.

Meanwhile, Jack feels good for a change, feels that he has done his duty to Parry, feels confident and ready to go back on radio. He coldly discards Anne which breaks her heart. On the same day, he receives news that Parry is comatose in a sanatorium. Desperate, Jack breaks into the billionaire's home and steals the Grail, which discovers is really just a golf trophy. He returns to the sanatorium, “Grail” in hand and places in catatonic Parry's hands, which awakens him. For the first time, Parry talks about the death of his wife. The next day Lydia visits Parry at the hospital, finds his bed empty but finds him leading his fellow patients in a hearty rendition of "How About You." Parry rushes to her and embraces her with such love and joy. Seeing this, Jack realises what he had in Anne, begs for her forgiveness and they are reconciled.

The Fisher King is probably among my top ten favorites films of all time. The cast is phenomenal, each one of the actors delivers flawless performance throughout. The characters are very well-rounded and interesting.

An outstanding scene for me was the dinner at the Chinese restaurant on Parry and Lydia's first date. It is funny and infinitely endearing. Their antics with the food are hilarious and the two vibe so well with each other. Later that night Parry walks Lydia home and declares his love for her in a way that would render any woman utterly defenseless. But as he opens his heart, he catches glimpses of his wife's murder, the memory that he has blocked out completely. As he catches the glimpse of what happened, the terrifying red knight appears.

Another beautiful scene was the very busy train station, where Parry follows and watches Lydia from among the anonymous the crowd. In Parry's eyes of love, all the people in the station begin to dance to lovely music and warm lighting.

The film touches on so many facets of life, pathos, tragedy, love, guilt, humor, failure, success, dreams and nightmares.

In every character we see development and a growing understanding of the human journey. Jack, the cold and arrogant "yuppie" that looks down on humanity and especially folks that were struggling. He has a complete turnabout. Parry, a bum, half crazy and raggedy, is restored to the wonderful self he was before the tragic shootout.

common one might say. I used to look down on women like that, wondering what makes them take such crap from disrespecting men; realising later in my life that these women are wonderful wife-material, these women love their men so well, being lovers and mothers to their men. I want to take a moment to talk about Anne, Jack's girlfriend. She is a little rough around the edges,

Lydia, like so many of us, feels out of place, mediocre and inadequate. This leads to isolation, tired of being used by men for one-night stands and then rejected. Lydia is also wife-material, forever grateful and surprised to find such a beautiful love in Parry.

The moral of the story for me, is that no matter how buckled, bent and broken we may be, Divinity exists within one and all and that for no-one is it too late or impossible to change and to overcome, and to realize that there are treasures in us all that simply needs to be honed. Love transforms all.