Home Teachings of the Samaya Srividya Tradition and the Himalayan Lineage

Teachings of the Samaya Srividya Tradition and the Himalayan Lineage 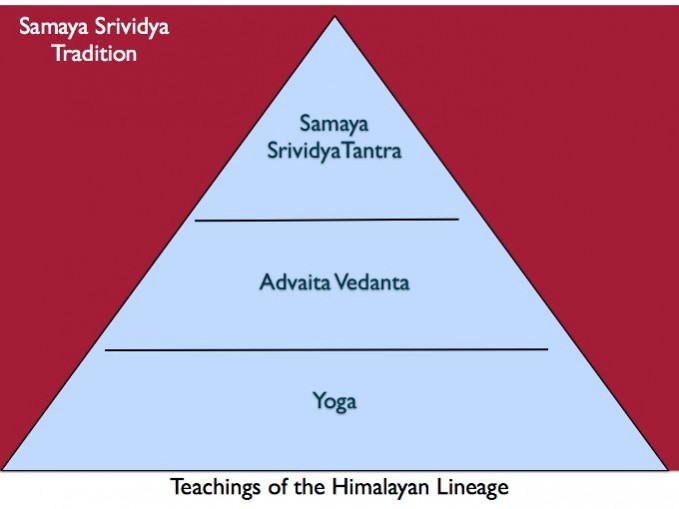 The teachings of the Samaya Srividya Tradition and Himalayan Lineage as taught by Swami Rama are explained.

The teachings are handed down from Master to student, who then in turn becomes a teacher. Our lineage is known as the Himalayan lineage and is said to be older than 6000 years. The Himalayan Lineage is an unbroken lineage dating back to legendary teachers such as the great sages Dattatreya and Vasishtha and historical masters such as Adi Shankara and Swami Rama.

Samaya means "One with the Divine Mother". Srividya means auspicious wisdom. Samaya Srividya is a privileged option for those who have reached an advanced stage in the cycle of death and rebirth and seek to end this cycle and attain enlightenment in this lifetime.

There are three stages of initiation given according to the Himalayan Lineage of the Samaya Srividya Tradition.

The Teachings of the Himalayan Lineage

The teachings of our lineage are based on the 3 streams of:

In the Himalayan Lineage of Samaya Srividya, Yoga as explained by Patanjali, is a preliminary step. Samkhya philosophy forms the basis of the first stream of our lineage and tradition.

Yoga focuses on discriminating between consciousness and matter at all levels. This stage of practice is dualistic.

In our tradition and lineage, theory and practice must never be divorced from one another. Yoga provides a step by step approach to the highest goal of spiritual liberation. Yoga, in its pure and pristine form, is a method of unlearning behavioural and thinking patterns. It presupposes spiritual insights or mystical experiences.

The emphasis is not on mere information or knowledge but wisdom. The focus in not on intellectual gymnastics but intuition. Yoga, practiced the traditional way, has nothing in common with the modern schools of yoga that are merely forms of gymnastics and acrobatics. It also has little to do with institutes of therapy or new age esotericism.

The second stream of Advaita is expressed in the Upanishads. The Upanishads are estimated to have been written in the period from the fifth to tenth centuries BCE, although the principles had been taught orally for a very long period prior to that; some say since around 6000 BCE.

The prefix "A" means "non", the word "dvaita" means "two". Thus the word Advaita means "not two". Advaita is a non-dualistic philosophy of life. This non-dualistic approach to life, goes beyond all dualities such as joy and sorrow, birth and death, young and old, embracing all of life as the One Divinity. It removes all separation between Knower and Known, between God and Devotee, between the Beloved and the Lover.

This mystical approach is far from intellectual and seeks to know the Atman, the center of individual consciousness, which is ultimately found to be qualitatively the same essence as  Brahman, the universal consciousness or the Absolute One all pervading Reality.

There are three forms of Tantra, of which Samaya is a purely internal form, whose sole goal is spiritual liberation or enlightenment. It deals with the higher energy centres, up to the energy centre at the top of the head, the crown chakra. The lineage of the Himalayan masters, emphasizes this higher Tantra Yoga.

The Paths of the Himalayan Lineage 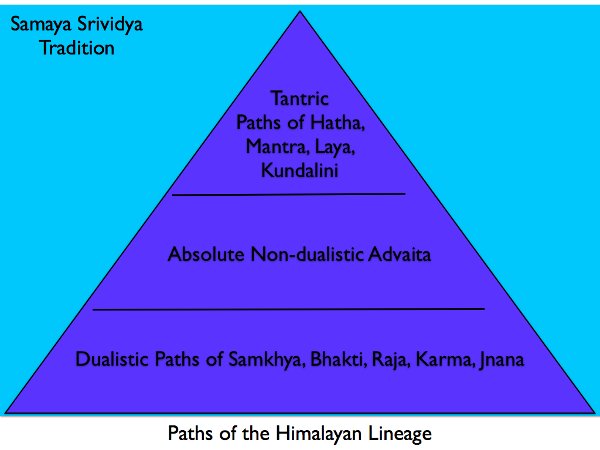 Raja Yoga, or the Royal path of Yoga, encompasses the other paths. It is also known as Ashtanga Yoga, referring to the Eight Limbs of Yoga described in the Yoga Sutras of Patanjali. Ashta means eight; Anga means limbs. It is important to note that the phrase Ashtanga Yoga has recently become known in the west as a system of physical postures, this is not consistent with the original meaning of the term.

In Yoga the aspirant must:

Vedantic Meditation or the practical approach to Advaita is generally called Self Enquiry or Atma Vichara. These practices are contemplative and generally complement the dualistic practices of Yoga.

In Advaita the aspirant must:

Samaya Srividya is the path of mastery. The aspirant is no ordinary seeker but one who has "adhikar". Adhikar literally means "having the right". The seeker must have the necessary qualifications or prerequisites to be initiated in to the subtle and sublime secrets of Samaya Srividya. The three qualities are necessary for this path:

The seeker who possesses the above qualities is called an adhikari. In our Lineage we initiate all adhikaris irrespective of their gender, religious background, race and socio-economic status.

Under the guidance of and with the support of the Guru, Lineage and Tradition, the adhikari will learn:

Texts of the Himalayan Lineage 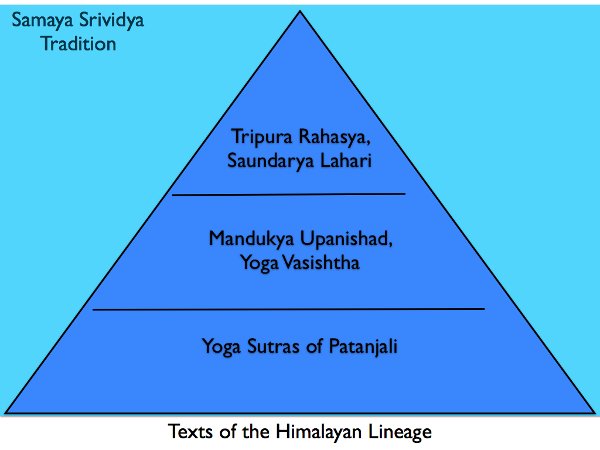 Yoga, as described by the great sage Patanjali, is a foundational practice, and is codified (arranged or systematized) in the Yoga Sutras. The word codified is commonly used because the Yoga science was recorded by Patanjali over 2000 years ago, although the science itself was not new, having been known for thousands of years before that time. Patanjali codified Yoga into 196 sutras (literally threads) outlining the path of Yoga.

Of particular importance is the introspection of the waking, dreaming, and deep sleep levels of consciousness, which have as their counterparts the gross, subtle, and causal planes of reality. It means examining not only the conscious, but also the unconscious and subconscious levels of mind, so that these can ultimately be transcended. These levels are summarized in the Mandukya Upanishad, a practical Vedantic text, which deals with the 4 layers of the Om mantra.

The Yoga Vasishtha is a part of the great epic Ramayana. It is a dialogue between the Sage Vasishtha and Prince Rama. The Prince, who is an adhikari asks the sage about the nature of the world, the meaning of life and the most fundamental question, "Who am I?" The Yoga Vasishtha is a truly monistic text, uncompromising in its approach to Advaita.

This is a unique tantric text. While most spiritual texts exalt the Divine in its masculine form, this text refers to the Divine as Her. It is unconventional for its teachers are a princess, a woman hermit and the goddess Sri Tripura Sundari.

It is unrelenting in its approach and reveals the Highest as nothing other than Pure Consciousness.

Saundarya Lahari means "Waves of Bliss and Beauty". Those looking for esoteric explanations on chakras and kundalini will be disappointed. Saundarya Lahiri is a collection of mystical verses in praise of the Divine Mother, She who represents all levels of reality.

Aug 16, 2018Editorial Team
Schools of Tantra: Kaula, Mishra, & SamayaECKHART TOLLE's Partner (KIM ENG) on "What is it like to be in relationship with an enlightened being?"