Home Tashi and The Monk

Tashi and The Monk 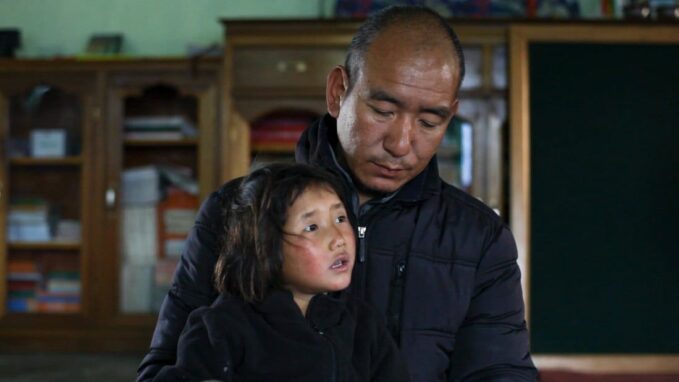 The Documentary “Tashi and the Monk” tells a story of a Buddhist monk Lobsang Phuntsok, hand-picked by the Dalai Lama to share Tibetan Buddhism with the West, who felt his inner calling to give hope to unwanted children and a five year old girl named Tashi.

Monk Lobsang has created a unique community in the foothills of the Himalayas called Jhamtse Gatsal (Tibetan for ‘The Garden of Love and Compassion‘), which provides a permanent home for 85 orphaned or abandoned children all learning to live compassionately. All those children came from a families who were either too poor to provide for them or parents who committed suicide, leaving children who displayed problems in behavior.

Monk Lobsang himself is revealing in one of the interviews (http://tashiandthemonk.com/) about his own unhappy childhood. His mother gave birth in a toilet, trying to hide him because her pregnancy was considered disgraceful for her in the village. He came to this world with an overwhelming feeling of shame and they used to call him ‘the uninvited guest of this universe’. His memories of childhood are not pleasant, he remembers that people didn’t like him. As a child, he would create problems, break people’s windows, or break their prayer flags. Everyone would tell him that there is no hope for him, that he will never change. He desperately needed someone who would believe in him, in his capacities to change to a better human being.

He was sent to a Buddhist Monastery and with time, he started to change. One of the most important teachings he remembers he received from his teacher is that we are a tiny part of the larger family in this universe. That means that there are billions of not only human beings, but other sentient beings, creatures, animals, bugs and birds. He realized that he is only one member of the large family in this universe. “Instead of complaining and screaming about yourself, you naturally take this responsibility, you feel this responsibility and start asking how can I contribute to my family, my larger family, to relieve them from their challenges.”

This is how he decided to turn his own challenges into opportunities for children who do not have support and love. He understood that he needs to make his life meaningful.

“I do not need anybody else to motivate me, to encourage me, to inspire me. When you look at my situation today, I am not an experienced person to do this kind of work. I am not even educated enough to do what I am doing today. And I do not have that much money to do the work I am doing today. The only reason that it is pushing me, keeping me going, is that I see there are so many children like me in the village, on the street like me.”

One of the 85 children that Lobsang and his team take care of is Tashi Drolma. Tashi is a 5 year old girl who lost her mother and was abandoned by her alcoholic father. The film shows how Lobsang is dealing with Tashi’s wild character as she is not cooperating and she shows the only things that she had an opportunity to learn in her family were violence and destruction. With Lobsang’s persistent patience, compassion and unconditional love, Tashi starts to change and transform into a child that is able to make friends.

The film was shot by Johnny Burke, Andrew Hinton and Andrew shared how everything happened (https://www.facebook.com/notes/631250810890424/?pnref=lhc). He was in India, researching a project when he received an email from Dogpatch Films in San Francisco who were looking for a filmmaker in India. The assignment was to visit a remote school called Jhamtse Gatsal to film Chris Reuth, an American student installing educational technology there.

Jhamtse is a two-day drive from Guwahati and when they arrived, they met 80 pairs of blinking eyes. His three-day visit turned into three weeks. He met all the children, volunteers and Lobsang whom he described as “the humble and inspirational visionary whose dream this all was”. Also, he met Tashi “whose backstories were filled with tragedy and trauma but whose open heart spoke so clearly of the possibility of transformation. I left with a promise to return to tell their stories.”

It took eighteen months before he managed to raise the funding to make a film. When he came back he was welcomed with hugs again. A co-conspirator, Johnny Burke - editor and filmmaker extraordinaire - joined him a couple of weeks later.

“We woke early to film the kids waking but they always seemed to be up already, brushing teeth, sweeping corridors, playing outside. Most of the time there was a happy babble, a general murmur of contentedness about the campus. But every now again it was broken with a scream or a shout or some tears.”They needed three months to record and Lobsang allowed them to stay as long as it was necessary to capture the atmosphere of the Jhamtse Gatsal.

Tashi and the Monk tells a story of how one Monk with an extremely unhappy childhood, who succeeds in transforming the lives of children with the same unhappy stories. As Lobsang shared: “I think the simple way in our life at Jhamtse Gatsal is number one accepting, embracing without making a judgment – good, bad anything. Next, the approach is to really create a space for them and be supportive of them. Then there is the power of love, the power of care or the power of compassion that we are giving to each and every child. And that becomes the main healing for each and every kid here. And I strongly believe that that works. Yes, it takes time, but eventually, the kids are really transforming into amazing human beings.”

There is an extreme power that lies in each and every individual no matter how difficult a past they had. We have the power to transform our lives and bring hope and happiness to the lives of other people and beings as well.

Mar 29, 2021Editorial Team
Conveying Spiritual Teachings through the Art of 3D Animation MoviesTwo Kinds of Movies: Which One You Prefer?