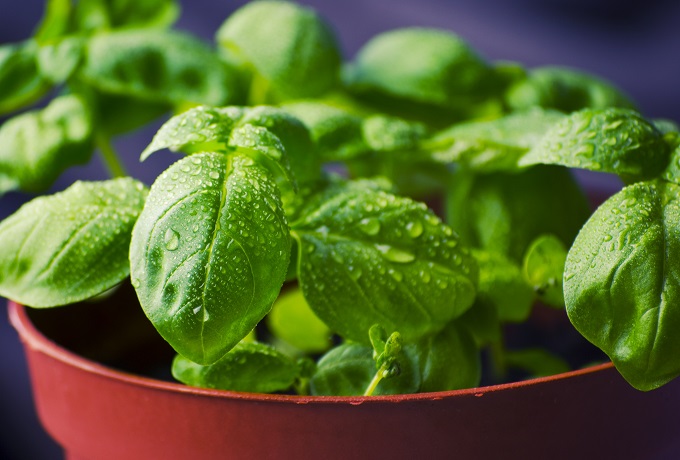 In Mediterranean cuisine it is the symbol of summer and its origins are lost in the mists of time. Fragrant and delicate with its green leaves it manages to tantalize the most demanding palates, it is basil. Basil (Ocimum basilicus) is an annual herbaceous plant belonging to the Lamiaceae family, and is easily recognized by the shape of its lanceolate leaves that vary from pale green to intense green to violet or purple of some varieties.

The name derives from the Greek “basilikos”, which means “herb worthy of a king”, as mentioned by the Greek philosopher and botanist Theophrastus, in the 3rd century BC. Basil seems to have originated in India and was brought to the West by the merchants of spices; the Egyptians, the Greeks and the Romans were already aware of its flavors and healing properties.

The Greeks and Romans believed that, to grow a healthy seedling, it was necessary to sow it, accompanying the operation with insults and curses, but to speak of the basil more seriously was the Roman writer Lucius Junius Moderatus Columella, who explains how the basil is a plant to sow in abundance “after the Ides of May until the summer solstice”. Among the Romans it was considered a magical and sacred plant to Venus, like many other fragrant herbs, to be harvested following precise rituals.

Some authors argued that it should not be severed with iron tools because the metal would undo all its qualities. It really is true, in fact, if we try to cut the basil leaves with a knife, due to oxidation, they immediately become black, so the ingredient should only be chopped by hand.

A Herb for Lovers

The famous Roman naturalist Pliny was convinced that the seeds of the basil, and not the leaves, were powerful aphrodisiacs; in some areas, even today, farmers make donkeys and horses eat it during the reproductive period to increase their sexual strength.

Later, thanks to these aphrodisiac characteristics, it became the true symbol of lovers. Even the Gauls thought basil was a sacred plant, so much so that its leaves were harvested only by those who had followed a complex ritual of purification. The Gauls cultivated basil in July/August until it was in bloom. The harvesters of this sacred plant had to undergo strict purification rituals: washing the hand with which one had to collect the plants in the water of three different springs, dress in clean clothes, keep oneself at a distance from impure people (for example, women during menstruation) and do not use metal tools to cut the stems. The sanctity of basil was also held in high esteem by the Egyptians, who used it for the preparation of balms used in the embalming of the dead.

In the Middle Ages, in order to collect basil, one had to first purify the right hand, washing it in three different springs, then using an oak branch and wearing white linen clothes. In Boccaccio’s Decameron we find one of the strangest love stories that has as its protagonist the basil plant. Boccaccio in V Novella, IV day, tells the story of Elisabetta da Messina who buried the head of her beloved Lorenzo, barbarously murdered by her jealous brothers, in a large vase of basil, which she watered every day with tears.

In the Middle Ages, moreover, basil was also used for exorcisms and therefore to drive out devils from the possessed, and it was believed that it performed miracles in case of pestilence and physical weakness of man. In the Renaissance the culinary and therapeutic properties of the basil were definitively recognized when Cosimo de‘ Medici also included it among the fragrances of the  “Giardino dei Semplici” (1545). But all over the world the basil is known above all for its use in the preparation of the most cooked sauce on earth… pesto!

It is a matter of opinion whether basil is actually a ‘magic’ plant or not, but we can point out that Napoleon used it for its property of stimulating intellectual concentration. Napoleon was in fact convinced that its scent would help him prepare the plans for maneuvering the armies and history is no legend…

The Power of Nature: Ecotherapy and Awakening

In recent years, researchers have become aware of a powerful new kind of therapy, which is just as effective against depression as traditional psychotherapy or medication. And the amazing thing is that you don’t have to pay for this therapy. It’s free, and completely accessible to anyone at anytime. It’s not even a new therapy either – in fact, it’s even older than the human race.

This is ecotherapy – contact with nature. A few years ago researchers at the University of Essex in 2007 found that, of a group of people suffering from depression, 90 percent felt a higher level of self-esteem after a walk through a country park, and almost three-quarters felt less depressed. Another survey by the same research team found that 94% of people with mental illnesses believed that contact with nature put them in a more positive mood. Since then, in the UK contact with nature has been increasingly used as a therapy by mental health professionals.

But as well as helping us to heal our minds, contact with nature can transform us. For several years, I have done research into what I call ‘awakening experiences’ – moments when our vision of our surroundings becomes more intense (so that they become more beautiful and meaningful than normal), and we feel a sense of connectedness to them, and towards other people. The world may somehow seem harmonious and meaningful, as a strong feeling of well-being fills us. (These are similar to Abraham Maslow’s ‘peak experiences’ – see my book “Waking From Sleep” for a fuller discussion.) And my research consistently shows that contact with nature is one of the most frequent triggers of these experiences – in fact, around 20 percent of them.

This is certainly true for me. I have what you could call ‘low intensity awakening experiences’ very frequently when I’m amongst nature. If I go walking in the countryside on my own (it doesn’t happen so often with other people) there usually comes a point when a feeling of well-being begins to well up inside me, and when the trees and the fields and the sky around me seem to be more alive and beautiful, and to be shining with a new radiance. The clouds above me seem to be moving with a dramatic beauty, and I have a sense that ‘all is well.’

Of course, countless poets have written of the states of awe and ecstasy they’ve experienced whilst alone with nature too. This is what William Wordsworth’s poetry is most famous for: his sense that nature is pervaded with what he called ‘a motion and a spirit which rolls through all thinking things, and all objects of thought.’ Other poets like Walt Whitman, Emerson, William Blake and W.B. Yeats have also left us many descriptions of the sense of meaning and harmony and inner joy they experienced while contemplating natural scenes.

Why does nature have this effect on us?

It’s not surprising that nature has a therapeutic effect when you consider that the human race – and all our evolutionary forebears – have been closely bonded with it for all our existence. It’s only in recent times that many of us have been confined to man-made environments. For us, contact with green spaces is therefore like going back home, and fills us with the same sense of safety and belonging. We crave nature in the same way that a child needs a mother, and derive the same feeling of comfort from it.

But the main reason why nature can heal and transform us, I believe, is because of its calming and mind-quietening effect. In nature, our minds process a lot less information than normal, and they don’t wear themselves out by concentrating. And most importantly, the beauty and majesty of nature acts a little like a mantra in meditation, slowing down the normal ‘thought-chatter’ which runs chaotically through our minds. As a result, an inner stillness and energy fills us, generating a glow of being and intensifying our perceptions.

So the next time you feel depressed or frustrated, don’t choose retail therapy or mood-altering medication – put on your walking boots and try ecotherapy instead. You may not just get a boost of well-being, but an awakening experience as well.

Steve Taylor is a psychology lecturer and the author of several best-selling books on psychology and spirituality, including “The Fall” and “Waking From Sleep”. Eckhart Tolle has described his work as ‘an important contribution to the global shift in consciousness happening at the present time.’ His website is www.stevenmtaylor.com.