Here is an experience which was very strange to me at the time, but later I did come to the proper understanding of it. This experience occurred when I was in Prashanti Nilayam in 1996 while sitting under the “Meditation Tree”.

While meditating I was disturbed by a loud commotion of young excited voices. I opened my eyes to see a long line of school children walking past with their teachers. As I resumed my meditation a vision then opened in revealing another long line of young school children who were again walking past, only this time they were all in spirit bodies. Walking beside them was Mother Teresa who looked over at me smiling.

At that time I knew she was still living in the physical, but later I came to realise that Mother Teresa was doing work on other levels and not just on earth. In her work she was helping young spirit children by taking them to have the darshan of the Lord.

At the time of having this experience I was feeling for some strange reason somewhat tired and very depleted, and I was wandering whether I should put off in going to Baba’s discourse, when all of a sudden Mother Teresa appeared next to me and said: “Your spirit is very strong let it work the body, don’t give up, get up and go.”

So I heeded her words and got up from my meditation and went to Baba’s Discourse. 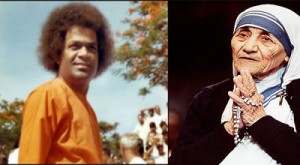 While there sitting in the hot sun listening to Swami, and wearing my sun glasses at the time because of the bright glare of the sun, I looked up at Swami and noticed something strange happening. I had to lift my sunglasses off to see clearer that of what I was witnessing. Swami was changing in colour, on and off. The colour would come then go, come then go, until the colour finally settled. This colour was of a royal purple blue, a very beautiful deep colour indeed.

I could also see Swami in two forms, as I was visually witnessing all this Swami then began talking on Rama. I knew then without doubt that this was a leela for me in turning up. I then got glimpses of quick explosions of something that even today I’m still not sure of. If I had to guess I would say it was bursts of pure energy shooting out in all directions. I am so glad I listened to Mother Teresa by going to Swami’s discourse, otherwise all this I would have missed.

And for the record I discovered in 2005 that Mother Teresa was a Baba devotee. In 1997 she permanently gave up the physical body.