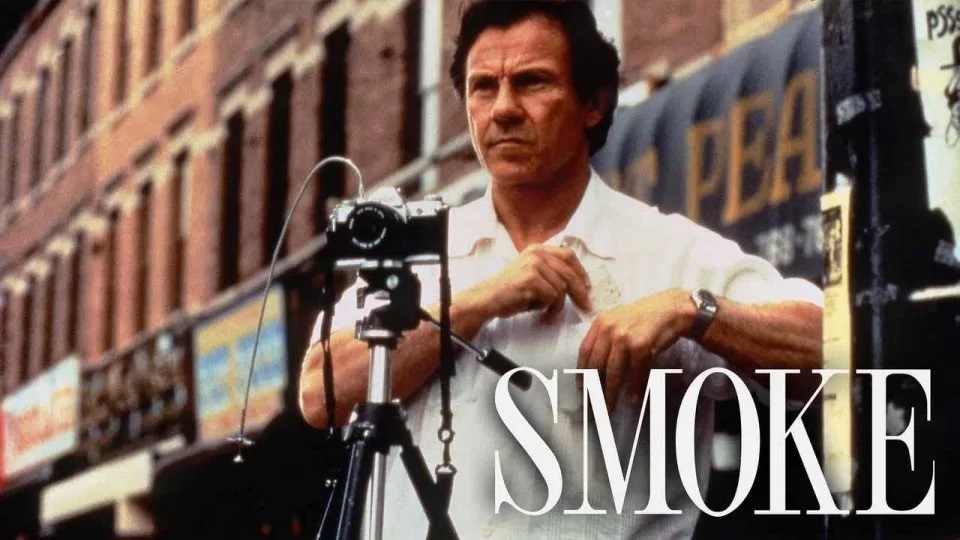 Long, squarely blocked, static shots, a sparse soundtrack with whole conversations set against a background of whirring fans, and distant traffic; the pitch less gestalt of mundane city-life. No action, no fast talking, no quick cuts; the tempo, steady and unrushed, is the key, the ‘in’; it says, “Slow down, no one is going anywhere, so be still, just allow yourself to see and inhabit this space, with these people. For a little while…”

Our story begins in the Brooklyn Cigar Co., a tobacconist owned and operated by Auggie (Harvey Keitel), a spot which serves the dual purposes of amicable conversation and cozy loitering, commerce seemingly a secondary consideration. Auggie knows his customers by taste and temperament and they know him. He and the Brooklyn Cigar Co. are fixtures of the neighborhood. Enter Paul (William Hurt), a reclusive writer, recently widowed of his pregnant wife; come to buy something to smoke.  The 2 men greet each other warmly, by name and as they go through motions of transaction they get to talking, Auggie has picked up a little piece of trivia that he knows Paul will enjoy, Paul leans in over the counter, attentive, they talk, they smile. Paul leaves.

While crossing a busy street on his way home, the writer, his thoughts arrested perhaps by a story he is working on, or by the cigar he is lighting as he walks, is nearly hit by a truck. Enter Rashid (Harold Perrineau), who tackles the writer to safety. After some convincing, Rashid allows the writer stick him for a meal. As the 2 talk over lunch, we see that Rashid is an eloquent, intelligent, refined young man, but is obviously dissembling and misdirecting when Paul asks him about himself. The writer; grateful for his life, enjoying the boy’s company, and convinced that he is probably in some sort of trouble, offers to put Rashid up at his place for a couple of days.

We spend some time with these 2 in Paul’s modest apartment; a bachelor’s flat with an alcove containing small a writing desk and a main space with bed, sparse and mismatched furniture, and not a spot of wall visible for all the shelves lined with books. They talk about books, about writing, about this and that… Paul is wistful, mellow if not melancholy, and funny. He knows books and he knows writers and he knows anecdotes, Rashid is thoroughly engaged, and the easy, unrushed conversion goes on. After a day or 2, Rashid leaves.

We follow him as he makes a long trek from New York, via foot and occasional hitchhiked ride, slogging patiently through miles of sweltering heat. He comes to an isolated fuel station that looks as though it was converted from an old farmhouse. He sits looking at it for hours from across the narrow country highway. The man attending the station has an awkward curved hook-like prosthesis instead of a left hand. He notices Rashid, but ignores him and goes about his less than brisk business as long as his patience allows. Finally, frustrated by the frank examination from a distance of the young stranger, crosses the silent road to confront the boy. Enter Cyrus (Forest Whitaker).

The stage is set and we have been introduced to most the main cast of characters this tale; a formidable ensemble and my favourite performance from each of the actors in the movie’s starring rolls, although my opinion on this matter is likely skewed by my deep love for this movie. “Smoke”, released in 1995, was written, at the friendly urging of director Wayne Wang, by acclaimed novelist Paul Auster and was the first movie he wrote.  (He has said in interviews that he enjoyed the process of film making a great deal and would go on to write more scripts and even direct.)

Much of the story is propelled by Rashid’s presence in the lives of the characters. He saves Paul the writer’s life, he gets a job in Auggie the tobacconist’s shop and through innocent neglect nearly ruins the biggest business deal of Auggie’s life and nearly costs him his life savings.

Fatherhood is a strong theme that runs through the movie. Each of the characters confronts fatherhood after a fashion; Cyrus the hook-handed country fuel station owner is Rashid’s father. Who abandoned his infant son after losing his wife in the same car accident that took his hand, and must now answer his son’s grief. Auggie may or may not be father to the daughter of an old fling, Ruby (played to perfection by Stockard Channing) who appears impromptu after years of silence. He never finds out whether the now teenage girl is his daughter or not, but we do see that he handles the situation with kindness and aplomb. In strange but very natural turn, there is even a moment where Rashid fulfills the role of father to Paul, a much older man.

Another theme that emerges is story. The film is story full of little stories and story tellers. The movie ends, as it begins, with someone telling a story. The story is great, the themes, as far as I am able to pick them up, are great. But the movie really shines when it slows down. The smoking in the movie acts as a sort of framing device, when the characters light up, a space opens up, wherein the narrative comes to a near halt, a little window of time in which there is nothing to do and nowhere to go, all there is to do is be, and smoke a smoke.

These are the moments where we get to know the characters; we get to simply be with them, observe their gestures and movement, hear the stories.

There is a scene in which Paul visits Auggie’s apartment and Auggie shows the writer a photo album filled with pictures taken in of the Brooklyn Cigar Co. Photographs of the same intersection and the same time of day, every day, for years and years. “They’re all the same,” says Paul. “It’s just one little corner of the world, but things take place there just like everywhere else.” Paul pages through album after album, finally Auggie says, “You’ll never get it if you don’t slow down my friend.” “But they’re all the same,” says Paul.

A long pause, some puffing, some contemplation. “Slow down huh?” says Paul. “That’s what I recommend,” says Auggie. “You know how its… Tomorrow, tomorrow, tomorrow… Time creeps on its petty pace.

There is the heart of the movie right there. Watch it and watch it again.