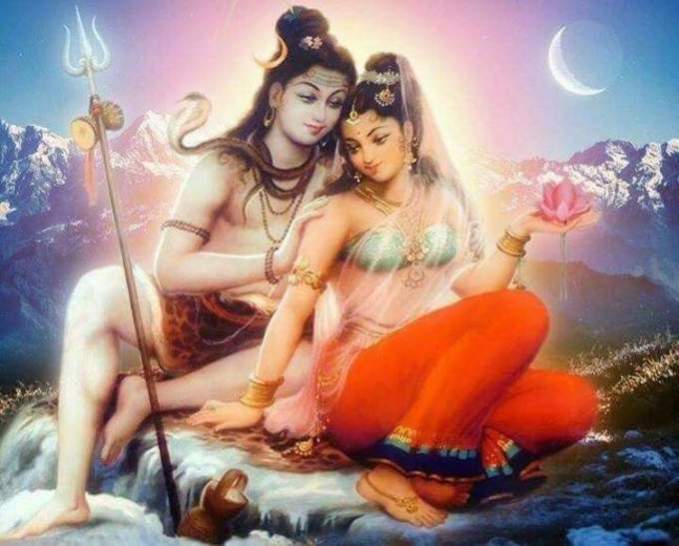 "Utterly fearless and uninhibited it is this consciousness that brings
into manifestation and sustains the infinite
variety of beings, from the creator to the
blade of grass. It is ever dynamic and active,
yet it is more inactive than a rock and is more
unaffected by such activity than space."
(Yoga Vashishtha - 5:23)

Shiva represents the unmanifest and Shakti the manifest; Shiva the formless and Shakti the formed; Shiva consciousness and Shakti energy, not only in the cosmos as a whole but in each and every individual. The roots of Shakti are in Shiva. Though one is manifested and the other unmanifested, they are in the ultimate sense one and the same One is the principle of changelessness and the other, the principle of change- Shakti is change within changelessness while Shiva is changelessness as the root of change. The experience of perfect unity of the changeless and the changeable, the dissolution of duality, is the aim of Tantra, and thus of Yoga.

Everything you see around you, whether physical, psychic, mental or whatever, is Shakti, both individually and collectively. This includes everything from a pebble to the sun. All manifestations of Shakti come from the underlying substratum, Shiva. The aim of Tantra is to invert the process to retread the path of creation as it were, back to union with Shiva or the Paramatman (supreme). 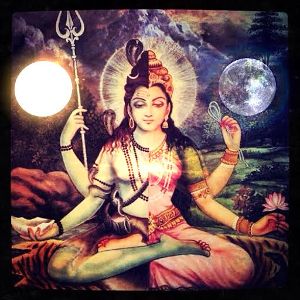 Tantra regards the material universe as the form, pattern, or expression of the totality. According to Tantra both the manifest and unmanifest are real; to tell someone that the things around him are unreal is nonsensical, because his experience on normal levels of awareness is otherwise. The world, says Tantra, must be regarded as real. One must utilise the body, mind and environment to know that which is beyond. Other systems, like Vedanta, regard the universe as unreal because it changes, but Tantra states that everything, whether changing or changeless, is 'real'; both are no more than two different aspects of the totality.

Shiva is father (pita) of all that moves and is motionless; he is said to be naked, clothed in open space, or digambara, (clothed in the universe). Now he is usually depicted as wearing a tiger skin and holding a trident which represents the three gunas of which he is the eternal master. He is said to ride a bull called Nandi and contains within himself the seeds of creation. He is symbolised by the shiva lingam and is totally unconditioned, in a continual state of nirvikalpa samadhi. Shiva is the king of all yogis - Yogeshwara - for he represents the supreme experience. He is also known as Kuleshana, lord of the kaulas, those who have reached the highest stage of Tantra (Kaulachara).

Shiva has many aspects. Sometimes he is called 'Rudra', the destroyer, who appears to be more like Shakti in nature (the dissolving aspect). This merely emphasises that the active and the inactive, manifest and unmanifest, are really one and the same. All the personifications or deities eventually represent exactly the same thing- the absolute. Only the symbol is different. If you wish you can create your own deity. The widespread worship of vast numbers of dieties indicates the incredible complexity (yet underlying simplicity) and tolerance of the all-embracing spiritual climate of India.

Shakti also has many names and aspects. She is known as 'prana' when associated with the organisation and growth of matter in all forms of life. She is 'kundalini' - the power that lies dormant in everything and which can be unleashed through yogic and tantric practices. She is called 'Kali', the dissolver of the world, who withdraws everything into her womb at the end of the allotted life-span or yuga. She is depicted as 'Parvati', the epitome of the loving and faithful consort of Shiva. She is the primordial power- 'Adya', the universal mother, 'Ishwari' - the consort of Ishwara Lord of the universe. Shakti is also referred to as 'Avidya rupini' (the form of ignorance), for it is she who produces ignorance and individuality. Conversely, she is known as 'Vidya, rupini', (the form of knowledge) for she is the means of removing bondage and achieving liberation or enlightenment.

The 'Kularnava Tantra' says, "By that which one falls, so one will raise oneself". Shakti is the mind of each one of us which can either enslave us or free us. She is 'Maya', (the creator of illusion), for it is through her power that one fails to see 'reality'. At the same time it is through the power of Shakti that the world is experienced; through her that Shiva can experience himself. Shakti is para brahman, the absolute, when she becomes a brahman at the time when Shiva and Shakti unite. Endless different forms of Shakti are worshipped in India - 'Uma', 'Gaud', 'Durga' - her forms are infinite, for there is no end to her power and manifestation. Her forms are as numerous as the reflections of the moon. Continually active, creating, sustaining and dissolving everything into Shiva, only to be re-created - this is the unending process of Shakti. 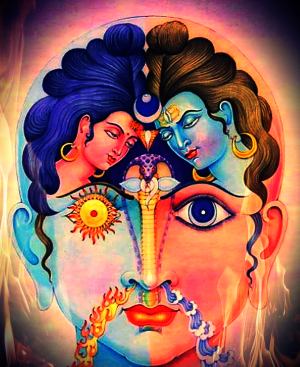 The concept of Shakti and Shiva is by no means confined to India. In Plato's 'Phaedrus', a book of the ancient Greeks, he states "What is on earth is merely the resemblance and shadow of something that is in a higher sphere, a resplendent thing which remains in an unchangeable condition." The ancient Gnostics were really a European tantric sect which interpreted Christianity in the light of higher experience. One of the Gnostic mystics, Simon the Magus, is reputed to have said, "The universal eons consist of two branches, without beginning or end, which spring from one root.........the invisible power and the unknowable silence. One of these branches is manifested from above and is the universal consciousness ordering all things and is designated male. The other branch is female and is the producer of all things."

The Gnostics divided man into three distinct groups in the same manner as does Tantra. The lowest group in terms of awareness, are those who worship the material world- 'pashu' in Tantra, The second group includes those who worship an underlying reality with blind faith devoid of experience- 'veer' in Tantra, The third group are those wild live in higher awareness - 'divya' in Tantra. So the ancient system of Gnosticism is fundamentally tantric in nature, and many other systems throughout the world are very similar. Energy, including matter and consciousness, are functioning together in the cosmos as well as in each and every human being. This combination gives rise to the world we see around us, to time and to place. Energy is controlled by consciousness and consciousness cannot express itself except through energy. As Sri Adi Shankaracharya writes in the first sloka of his 'Saundarya Lahari', the sixty-fifth Tantra: 'How can Shiva function without Shakti?' Therefore Tantra says that in order to merge with consciousness, one must take the help of Shakti.

There is a supreme experience where Shiva and Shakti no longer exist as separate entities. Some call it 'Brahman', others refer to it as being 'Not this, not this', meaning that it is inexpressible, while still others say that it is one without a second. This is the state of nirvana, samadhi, perfect oneness, moksha or enlightenment. It is the state where Shiva merges so closely with Shakti that they become one. They embrace each other so tightly that they cease to be separate. And this is the meaning of the many 'seemingly' erotic sculptures which personify these two principles - Shiva and Shakti. They symbolise that enraptured state where separateness is no more. This is 'The divine embrace of Tantra'.