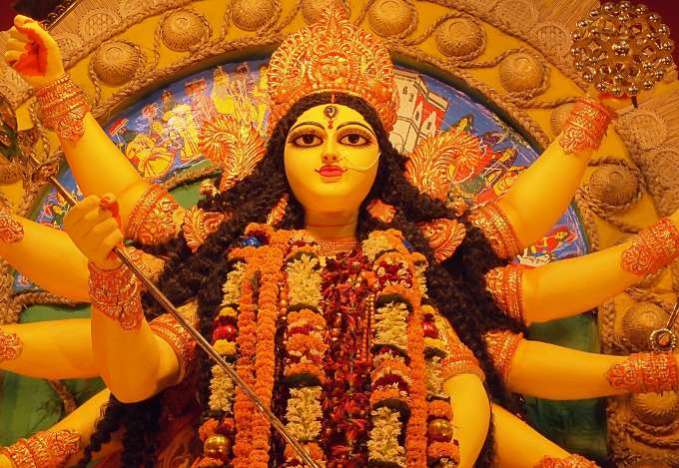 Shakti is the primeval force, the first emanation of power from the Absolute — Brahman. She is the creative aspect of the Brahman. It is through her that the One becomes the Many! She is the womb of the universe.

Hinduism is famous for its symbolism and from ancient times the pictorial representation of God took the form of both male and female. The transcendental, formless and motionless Absolute came to be associated with the male and its multi-formed, active, manifested energy, with the female. This two- in-one existence came to be known as Purusha and Prakriti or Shiva and Shakti. This union can be compared to the dynamo and the force that charges it. The Purusha is inactive, consciousness and Prakriti is unconscious action. In Hinduism time is cyclic and one creation is followed by destruction and again another creation and destruction. During the time of dissolution, Shakti lies quiescent and is only a potential. But at the time of creation, Shakti separates from Shiva and pierces the Bindu or point from which everything expands with the sound of “Hreem” and creates this entire paraphernalia of existence. (This is very much like the Big Bang theory in which the cosmos explodes from a single point).

In Hinduism, sound is a vibration of the Undifferentiated Intelligence of the Brahman and acts as a catalyst which sets into motion the unfolding of the manifest universe. This vibration is known as “Sabda Brahman”- the Absolute as “sound”. It is a wavelength that can be experienced only by the Divine. 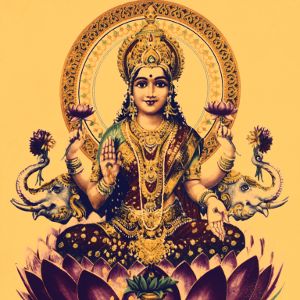 This sound vibration splits Shakti into two opposite fields of magnetic force called — “nada and bindu”. Bindu is the centrifugal, positive male force and Nada the centripetal, negative, female force. Bindu is the ground from which nada operates. It is nada which unfolds the manifest universe. This duality of poles is the magnetic force that holds together in a state of vibration all the molecules of the physical world. Shakti or energy is the physical ultimate of all matter as science has proved. “Matter is only energy in motion”. All that we know and experience with our mind and senses is nothing but the manifestation of Shakti. The transcendental aspect of the Purusha is something which we can never know.

Hinduism has always extolled the superiority of the feminine principle in all things concerning the physical world. With its ability to pictorise everything, Shakti has been depicted as Goddesses in various forms. Every male god is endowed with his own feminine Shakti. But the interesting thing is that the name of the god is always preceded by the name of his consort — Lakshmi/Narayana, Gauri/Shankara, Radha/Krishna etc. Even in the normal names given to girls, the word, Devi (goddess) used to be added. This is to say that originally Hinduism encouraged everyone to look upon all women as personifications of the Goddess.

This is the basis of the Shakti cult in which the divine is worshipped in the form of Devi or the Divine Mother. Our relationship with our mother is our primary relationship. Therefore all of us can have an instant rapport with the Divine Mother since the mother is one with whom anyone can have an intimate relationship. She is the eternal womb of all creations, human, sub-human and animal. Wherever you see maternal love, in a bird, or animal or human, know that to be but one spark of her divine love, for she is the universal mother! The umbilical cord which binds us to this Divine Mother is one which can never be broken. Our dependence on her is absolute! Unfortunately the modern age seems to have forgotten this basic truth, that we are totally dependent on her for our very existence. We call her “dirt” and treat her like dirt!! In India she is venerated. The first thing we do in the morning when we rise out of bed is to touch the ground and ask her to forgive us for the transgressions done to her during the course of the day — stamping her, digging her, throwing garbage on her, spitting on her etc.

All of us regardless of the religion we belong to, are followers of Shakti since all of us long for power, beauty and wisdom. All these come from her alone.

There is another interesting aspect of Hinduism which is not to be found in any other religion. It has always recognised that this world is one of duality and since the universe is the projection of Shakti, she will have many forms, both positive and negative. She is the source of beauty and ugliness, wisdom and ignorance, happiness and unhappiness! Hindus are encouraged not to just worship her beauteous form as Lakshmi, the goddess of beauty and auspiciousness but to worship her in her hideous form as Kali, the destroyer. Not just to worship her as Saraswati, the giver of all wisdom and art, but also to worship her as Mahishasuramardini, the destroyer of evil and Chandika, the terrible, whose wrath lets loose the typhoon, the flood and the tsunami! 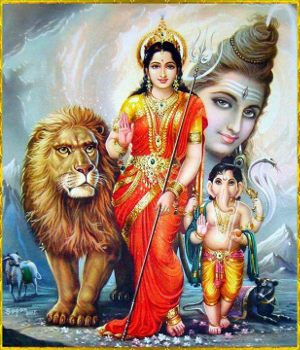 This recognition that all things both positive and negative stem from one source is unique to Hinduism. The One God of Hinduism is an all- inclusive, transcendental as well as immanent God from which nothing is left out and therefore nothing is condemned. He is available to everyone regardless of whether one believes in him or not. The One God of the Semitic religions is a transcendental and exclusive God-exclusively belonging to those who believe in him! Those who don’t believe in him are condemned as heretics, bound to go to hell!

Hinduism believes Shakti to be Maya, the enchantress who has bound us to this enthralling universe with bonds of love. Since she is the one who has bound us she is also the one who can release us. By her grace alone can we be released from the darkness of ignorance, the bondage of maya and taken to the abode of bliss. Thus two, nine-day periods are set aside during the course of the year, exclusively for her worship. This is known a “Navaratra.”

Jan 15, 2018Editorial Team
Entering the Zone of Divine GraceTantra ~ A Deeply Esoteric Teaching handed down from Guru to Disciple