Home REIMAGINE – The Birth of an Anthem

REIMAGINE – The Birth of an Anthem 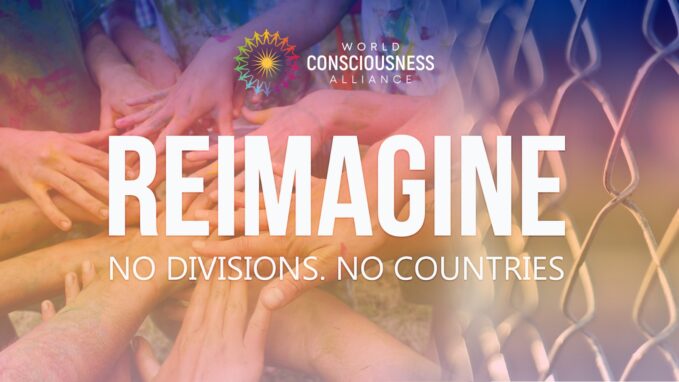 This year of 2020 brought tremendous changes on a global level. The Pandemic crisis adversely impacted the world´s economy and millions of lives, leaving many people with a sense of insecurity and worry about the future. Having lost their jobs and possessions, many around the world were devastated. We can also witness greed and hunger rising in the world. At the same time, with more and more people questioning the way we had been living before this global crisis, it was apparent that consciousness was starting to change.

It is said that everything we want to build in the world first arises in our minds. If you can imagine it, then you have the power to create it; just like John Lennon believed and described in his popular song, “Imagine” (1971) that encouraged listeners to imagine a world at peace without the barriers of borders or divisions of religion and nationality; and a world where humans are no longer attached to material possessions.

One of the most positive things to come about in the midst of this year of uncertainty was the birth of the song REIMAGINE, the anthem of the World Consciousness Alliance (WCA), created as a gift from the WCA for the world. The goal of this masterpiece is to be a reminder for all of us to reimagine a world that can exist as a place of respect, peace and harmony among humans and among all species of Mother Earth.

There were people who listened to this special song and shared their impression that they haven´t heard a song with this kind of message for a long time. Recently, The Awakening Times had a conversation with Andra Baylus, president of the World Consciousness Alliance, and we asked her if she might share how the anthem of WCA, ¨REIMAGINE¨ came about.

Dear Andra, please share with us how REIMAGINE was born and the details of who wrote the lyrics and composed the music and what served as the inspiration for the song?

Andra: The founder of WCA, Mohanji, envisioned an organization that could inspire the attainment of the highest human refinement through the medium of the performing and visual arts and other beneficial platforms. Thus WCA was created. To this end, in our first year, we sponsored a musical program, ¨Festival of the Arts for Peace¨ in Washington, DC, with music that inspired the best in humanity through soloists, rap artists, poetry and a full choir, singing, ¨I Believe in the Humanity of Humanity¨.  https://www.wca.earth/dc-nov-10/

We also initiated the speaker’s platform, Renaissance of Humanity: Conversations for Change, hosting notable guests who share their perceptions of how we can raise the consciousness of humanity to be more compassionate and loving. When notable people speak about deep topics that address the refinement of the human being, more people will listen and be encouraged to make changes in their lives, hopefully, to add value to the world. You can watch the episodes on our WCA Youtube channel here:  YouTube.com/worldconsciousnessalliance

As more ideas for future programs were being generated, it seemed appropriate to have a song to herald the beginning of each event or program, a theme song identified with WCA.  We, therefore, were encouraged to contact Yoko Ono, to seek her approval to allow the WCA to use John Lennon's famous "Imagine". However, this proved a daunting task and never materialized; and for good reason: We were really meant to use our own original song, REIMAGINE!

Our founder, Mohanji, was inspired to write a poem one morning that embodied the essence of his vision of compassionate and loving humanity, a world without war, animosity, anger; a world filled with respect, gratitude, selflessness, and love... just love.

He presented this inspired poem to Jelena Fassbender, a singer who shares her experience with the responsibility she felt when being given such an important task by Mohanji. You can watch the interview here: Interview with Jelena, lead singer and composer of REIMAGINE on N1 TV)

Jelena pushed forward with this assignment from Mohanji and the tune miraculously came to her almost immediately and so REIMAGINE was born! What to do now? It was decided that the song would be professionally recorded.  Bojana Fabel was invited to join Jelena to sing a portion of the song and three young people: Mila, Iha and Aradana, were invited to do a portion of the song in ¨rap¨!

After practicing with all of their hearts and being suitably prepared, the day came for the recording to be made. Everyone involved gathered as planned ready to do the recording. All of a sudden, there was an unexpected surprise! Mohanji, himself, arrived at the recording studio and surprised everyone by adding his magnificent speaking voice towards the ending which lifted the song to new heights. The deep resonance in Mohanji´s voice touched everyone's heart. With that gift, the song was truly complete and ready for the world to hear.

Of course, it is customary these days for a song to be turned into a music video. A team came together miraculously to set powerful visuals for the song and the result was this magnificent music video that can be found on our new WCA YouTube channel (REIMAGINE).  There is also a version that has lyrics for everyone to sing along!

For whom is REIMAGINE intended?

Andra: REIMAGINE is meant to be played far and wide with the caveat that it should be announced as the anthem of the World Consciousness Alliance, given as a gift from the WCA for the world.

REIMAGINE not only conveys a message for a New Humanity, but it has a transformational quality that will captivate and inspire a positive and hopeful outlook on life that will rejuvenate our spirits and inspire all of us to want to contribute to creating a world where there is abiding love and harmony.

Is it possible for more people worldwide to be included in what the World Consciousness Alliance is doing?

Andra: Yes, absolutely! We encourage those who have a creative urge who believe in this great mission, and feel they would like an opportunity to enhance the efforts of the WCA with their gifts, skills and talents to please contact us at: info@wca.earth.

Nov 21, 2020Editorial Team
The September issue of the Awakening Times is Out!10 Lessons Traditional Yoga Taught Me