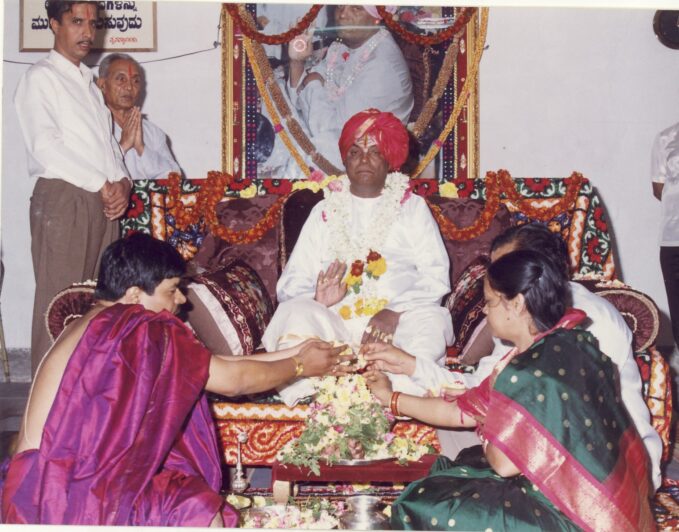 Baba and B. R. Patil

R. Patil Lingadalli hailed from a well to do family. He was born rich and at the same time he also enjoyed enormous power as the chairman of BLDEA. He was a dedicated devotee of Baba and he still is. Whenever Baba used to be at Vijayapura, B. R. Patil used to send food to Baba. It used to be a four-compartment large tiffin carrier which his servant used to deliver it to Ashram. The time of arrival of tiffin was fixed and at that time Baba would go to have bath. Baba used to have his meal soon after his bath. Mrs. B. R. Patil also used to accompany the lunch box. She used to serve food to Baba. This routine of delivering food to baba by B. R. Patil was being followed from many years. B. R. Patil was also involved in building the Vijayapura Ashram by supervising the work wherein Kuppanna Shetty provided financial assistance. 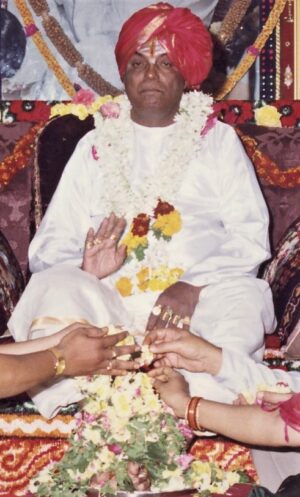 Whenever the preparations for Datta Jayanti or Guru Poornima function began in the past, Vijayapura devotees felt insecure about the fundings. Most of the devotees were either from lower middle class or were poor. Money could not be raised with so much ease as it is done today. Hence the devotees used to approach B. R. Patil for contribution with high expectations. And he always did justice to their expectations. He donated generously. He stood by them, then and also today. Even today, the collection for Datta Jayanti begins with B. R. Patil. It is considered as a propitious beginning. R. Patil once had a health issue during the year, 1993 or 1994. He was diagnosed with Ischaemic heart disease. Baba asked him to get checked up at Jaslok Hospital in Mumbai. And he did accordingly. One of the best cardiac surgeons at Jaslok hospital, Dr. Suresh advised B. R. Patil to undergo coronary artery bypass graft surgery. Baba enquired Dr. Shaila Weling about the line of treatment for B. R. Patil, a surgeon at Jaslok and baba’s devotee. She also came to the same conclusion that bypass surgery must be done. She also confirmed that Dr. Suresh was the best surgeon available, so B. R. Patil can trust him and get operated.

Mrs. B. R. Patil was worried at the thought of IHD and surgery. She called baba from Mumbai and conveyed everything. Listening to her patiently, baba told “Ninna kumkuma nanu kapadutini tayi, nee chinti maada beda (Mother, do not worry. I will protect your husband; nothing will happen to him). But there is something you must do. Do not operate him now. If the doctor operates your husband, he will die. Just get a medical prescription.”

Mr. B. R. Patil who had made up his mind for bypass surgery; gave up the idea. He requested his doctor to only prescribe him medicines as it was suggested by baba and returned to Vijayapura. He continued his medication and smoothly began his day to day routine. Years passed by and it was after seventeen years that the same old symptoms started to show up again. This time again, bypass surgery was recommended, and he underwent the surgery. He lived a happy and healthy life for seven years post the surgery.

Let us just look around; is there anyone who is alive for twenty-four years after being advised for bypass surgery and not undergone? Science defied; doctors proved wrong. Unmistakably a miracle that is happening from twenty-four years. We witness it only if we believe in it. We know so many miracles performed by baba and many more like these are taking place with the faintest idea and still many more without our knowledge!