Interview with Semir Osmanagich. Bosnian pyramids the valley of freedom.

The site of the Bosnian pyramids is one of the most exciting places in the world. Every year it attracts scientists and spiritual seekers from all around the globe. When you visit Visoko, a small town situated in the northwest of Sarajevo, the capital of Bosnia and Herzegovina, it is more than obvious that something beautiful and very powerful was built there.

But, the scientific debate is still ongoing.

To thoroughly check the story behind this, we interviewed Dr Semir Osmanagic, the archaeologist who discovered them.

Dr Osmanagich, could You please explain this place, and tell us how it all started?

Everything started as an archaeological project in 2005 with my arrival to Visoko. After a year, we had already registered the foundation, the first of its kind in the Balkans, for the archaeological and scientific research of the pyramid.

In the last 14 years, this has become the most active archaeological site in the world. These types of projects usually last 10, 15 to 30 days. 10-15 diggers and one archaeologist.

In our case, it is different. Hundreds of volunteers, dozens of researchers and staff are working throughout the year, revealing the most massive construction structures in the form of pyramids above the earth, and the largest complex of underground tunnels.

Through hundreds of testimonies of people who came to the pyramids, we realised that their energy is very beneficial to the human organism.

What was the reaction of the public?

Even today, many do not understand us because we destroyed the fairytales of pyramids being built like pharaohs´ tombs from 4-5 thousand years ago, or as sacrificial places in Mexico – something archaeologists had also been claiming for a long time.

What we are talking about is the sum of scientific research. Pyramids are energy machines, and they are very complex and work on several levels.

At first, they ridicule you. In this part, you have to be very persistent.

After that, they attack you very aggressively, using various and incredible methods. But you have to remain persistent and prove to the whole world that you are right.

What comes next is SILENCE.

When this phase is over, it only remains for them to accept you – at that point, you will probably hear: “We knew it all from the start.”

Our project is the most open one in the world. There are no secrets in our community. Knowledge belongs to everyone.

Some of you may know stories about the Sphinx. Under the left paw, there is an entrance to underground galleries, where the libraries of the Atlantis are hiding. Atlantians were the real builders of the Egyptian pyramids.

In 1999,  Hawass and his team of five were digging on that location, and they found the entrance, but they never published it to the public.

When I spoke to the director, to my question: What they found? He answered: that it is strictly confidential!

In the case of Bosnian pyramids, there isn´t such a thing, entirely on the contrary. Anyone ready and willing is welcome to participate. In the past 11 seasons, we had more than 3 550 volunteers from 63 countries, six continents – the world has never seen such enthusiasm in the field of archaeology before.

Could you please explain the idea of a pyramid as an energy machine?

Unfortunately, they do not teach us about energy in schools. They do not inform us that there are different energy flows. Ancient nations knew about the power and elements of sacred geometry: number pi, golden section, geometric shapes such as a single triangle, etc. 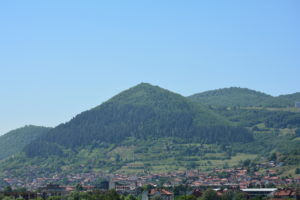 For example, you have underground water, which is harmful to us, but if you make a stone circle from energy-pumped rocks such as minerals, it can neutralize this negative energy.

They knew if these elements are present in pyramids, tumuli, tunnels, they can boost energy.

This project brings a new perspective on energy. Our concept of energy has been totally wrong for the last several hundred years.

Imagine if we had pure and free energy today. That would be the end of all monopolies. Not only in the production of electricity, but also of oil, gas, and all the industries that follow it. The world would be changed in its core.

Clean and free energy would be the first step in building a free society.

It is normal for the ruling elite to resist that.

How to overcome these elites, systems, corporations and governments restrictions? Is it possible?

Nikola Tesla was a genius who was 150 years ahead of his time. Not even today can we fully understand the size and possibilities offered by his research.

However, at that time, there weren´t many like-minded people, so it was easy to neutralize him. Today there are hundreds of people, from Dubai to Brazil, from Singapore to America, Germany, Sweden, who work on devices for free and clean energy.

They will not be able to stop this process, regardless of the actions they take.

Spiritual communities such as Damanhur in Italy, Kibuci in Israel, Aerials in southeast India, Avdil in Norway, and several similar ones in the United States, decided to connect the spiritual and physical plane. They are forming their own network.

Elites can see that, and they are trying to accelerate the process of complete control, through projects like 5G, bio-chips, artificial intelligence – whose ultimate goal is the complete separation of our physical and spiritual senses.

Without spiritual information, we focus solely on the physical and become beings who are thinking only about how to pay the bills.

But they forget that we carry the seed of freedom in ourselves.

Our consciousness cannot be controlled.

Through meditation, we can dive into great depths and find the sign that our soul has, and if we go even deeper, we come to our spirit – which is part of the Creator.

So, in us is the Holy Trinity, and meditation helps us to reach knowledge, to be completely free.

What’s happened in the last three years? The Egyptian government forbade meditation in temples and pyramids. Why? So that people would not be free.

Everything is a matter of choice.

Will we be free and pay the price, or we will obey the system and wait for someone to do this for us? Here, we build meditation platforms because we want people to be free, and so you can see a perfect example of freedom. It can be done. It MUST be done.

Interview with Yanis Delaterre: Happiness and Why its ImportantPilgrimage to the Pyramid
Comments: 2