Home How Will Covid-19 Change the Film Industry

How Will Covid-19 Change the Film Industry 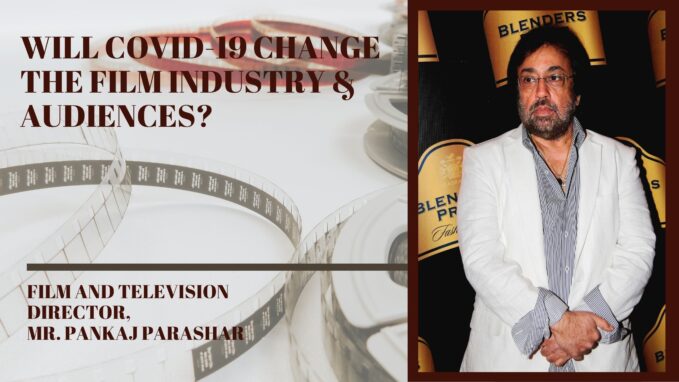 For this session of Conversation for Change WCA talked with Mr. Pankaj Parashar, a world class Indian TV and film director, digital artist, composer and a shaper of imagination. He has won the Indian Film Award, which is the equivalent of the Academy Awards or the Oscars. He has directed over 15 feature films. And he has worked with a number of India's A-List legends in the industry, such as Sridevi, Sunny Deol and Rajinikanth. He directed the cult classic Karamchand, which is still India's most popular detective television series.

Pankaj Parashar: I think there is a quantum shift in the consciousness of the taste of the audience. They respond more to each other, because suddenly there's the news that you might get COVID and you might pass it on hanging over you. So people have become a little more appreciative of each other.

As far as cinema is concerned, the OTT (On-Line Streaming) is a different ballgame. The kind of creativity that is there is very open. In a film, you're more limited. People have got used to sitting at home and watching two hours, ten hours, eight hours of OTT from all over the world. People who are 15 and 16 are watching Dutch programs and Japanese programs. The spectrum has now become a multiple. Tastes have definitely changed in the last seven, eight months.

When I went to the Film Institute I was only watching Bollywood films, but the moment I walked into the hallowed gates of the Film Institute, there were 9000 films out there of different filmmakers and my mind exploded. The same thing has now happened to the youth sitting at home and watching on the phones in the hands, because there are 8000 or 10.000 different films they can watch. It happened in the 50s and 60s. It has to happen. COVID has changed it in a big way because suddenly there is a small screen.  When you say small screen, it is not a small screen, because the ratio of what you're watching covers that same part of your vision as if you are sitting in a cinema and watching a big screen. If you've got headphones, bang on, you are on, the experience can be as involving as when you're in a cinema.

Do you think this will shape the way that people are going to consume media and film in the future?

Pankaj Parashar: The choice is with the creator. Right now, the 1500 films that are being made across the planet, those are the visionaries and the creators who are changing the tastes of the audience and a lot of people are sitting at home and thinking and their way of thinking has changed. This quantum shift in the kind of creativity happens every 10 years.

Which is a good point, actually. Because if you take the COVID situation, there's now much more anxiety in the world, more insecurity all coming up, like a bubble. We have polarizations within countries as well of different races and classes. How do you think the film industry could make a difference at this time, and what sort of films can help in the future?

Pankaj Parashar: We have this great hope that films can bring you enlightenment. That's not going to happen, but let me also tell you one thing: when you're watching a film, and you're totally involved, you're in a state of distancing yourself, you become one with the object in front of you. That is, in a way, the Buddha state, because yourself is gone. You are now there, inside the screen, and you're involved with those characters. That is a spiritual experience. I know that it might sound too much, but even a love story is a spiritual experience, because you're not there. You're in those people and you're in their story.

That is still there with the phone, but to answer your question, you cannot have solutions through cinema. You can have suggestions. I made a movie called Banaras, a mystic love story, which had a lot of suggestions about how you have to go back to your source and how we have forgotten, apart from it being a love story. A lot of people enjoyed it and I liked it, but I don't think it changed any lives or anyone left their home and went and sat in Banaras to meditate.

Do you think that's because there will always be the same tastes of people?

Pankaj Parashar: No, tastes keep changing every minute. But the tastes are not changed by the people, they are changed by the filmmakers. The filmmakers give you something new and you say ‘that's nice’ and your taste has changed. You haven't gone back to the filmmakers house and said this is what I want you to make and then he makes it. It's he who decides the taste. But the thing is that in today's world, I also think because of the quietness and nature getting relief, because less pollution, less noise, at least in the first three, four months, there is an easier way of communicating with nature or meditating. It's become easier. That's what I personally feel. I also speak to some of my friends who are spiritually slightly awakened and they find that this is a good time to connect. This is a good time to quieten your mind and meditate.

You're an ace filmmaker, and you've worked with some of the great actors in the Indian film industry. Some of these you'd consider legends. Could you tell us one quality or a few qualities that makes a person a legend in your opinion?

Pankaj Parashar: I asked Rajinikanth, because the kind of following, even till today, that the man has got, I don't think any star has ever had, and when I was working with him, I found him to be very normal. He was very open to the fact that Sridevi was a heroine and she had a double role. You have to sublimate your ego to work in a movie where Sridevi is there and she has a double role. She's going to be in every scene, and she's going to take away the movie. He was reading a book, it was a spiritual book  about Mahavatar Babaji. I asked him, if he ever imagined this stardom and he said, “It's a cosmic seed inside me. God is playing through me.” Maybe what he was trying to tell me is that you go through life having a human experience through the eyes of God. He was so spiritual and the man has gone to Himalayas. He said, “I would go two months to a really quiet place up in the mountains in a temple and clean the temple, and clean the floor, and live like a hermit over there. I would roam the forest  and I would meet these babas and they don't know me and I would chat with them and then  in two months I would go back to London; casinos and whiskey and this and that.

Humility was there and determination has to be there, isn't it?

Pankaj Parashar: Yes, determination has to be huge. These guys have slept on platforms, and they've gone hungry. Dharmendra had to walk 18 km every day to the studio. I have really studied them, what it is that is so special there and it's something that Cosmos has given. That's that X factor that gives you a great affection, people love you and they feel for you. It's also identification you need to have the hero for yourself to feel great.

You have an interest in the spiritual path and practices. Do you feel that the world at the moment is transcending to higher awareness?

Pankaj Parashar: Either the cosmos is playing dice or it doesn't consider humans to be very important because otherwise it would have sent someone who unites the whole race, so we stop our wars and stop starvation and stop children from dying. If you stop war for one day you can feed children for the whole year. Our Alexander the Great was buried with his hands out to say that you leave this planet without anything. We have had idiots like that who had destroyed humanity. There was Hitler, of course and he had followers listening to him. That is the sad part. How did he have so many nutcases around him who listened to him and were far meaner and crueler than him?

Do you think it's possible that collectively we can do something?

Pankaj Parashar: There are films far and few in between that are made, but it doesn't help, because there is a big wall of organized religion which promises you an afterlife, which is fantastic. You're fighting against an afterlife, the brochure of the afterlife. Are you going to fight that?

Music is a very good device for getting you into a good state, especially if you use Aum and a lot of mantras which are 10,000 years old and all that, but there has to be a way of doing it. If the whole world meditates for 3 minutes on the same thing at the same time, we will raise consciousness.

What are the projects are that you're working on now? What about Banaras? Will you be doing any more of those? They are giving people a different awareness, something different from the ordinary. Is there anything that you have planned coming up?

Pankaj Parashar: I'm planning a film on the Narmada river which is very holy. I shot the whole journey. Then I've shot again in Banaras. Now I'm doing some stuff in Bengal. It's a journey that continues, because apart from the movies that I'm doing, I enjoy doing documentaries, because you're in touch with the real thing. I'm doing OTT series, a thriller, also. That's the format I enjoy. Music I keep composing. In COVID I’ve done more music than ever, because I had to stay at home, so that's a blessing in disguise.

That's a good inspiration in itself for people now, because as we mentioned, there's lots of stress and anxiety at this time, but what you found is that there's an opportunity as well.

Pankaj Parashar: Music is instant joy, you play it and you feel good. Painting takes time. It's a lot of effort and movies take more time and more effort.

I've been with Mohanji here in India since March. This country has incredible richness. The depth of understanding and wisdom about understanding yourself, about kindness, compassion and non-violence, it's incredible here. I think more of that present across the world could be a fantastic idea. What do you think of bringing that tradition, the ancient tradition of India to the world?

Pankaj Parashar: We keep trying to do it and a lot of people are learning more about India now. I was told by Datta Shiri who's met Mahavatar Babaji, that this is the middle world and this is a very important place for you to have a quantum shift, a jump in consciousness. It is a very important birth to have on Earth at this time and a lot of beings from other universes have come here for that jump. That’s what I was told and it's a good thought to entertain.

Dec 25, 2020Editorial Team
Dance and The Power it Has to TransformAllan Holzman: The Future Of Cinema