Here’s a beautiful experience granted me back in 1984. This was the very first time I was used in guiding a lost soul into the light (literally), and this soul just happened to be my dear brother-in-law.
Often I have thanked God for granting me the privilege in this life of not only serving those in the physical, but those in spirit also.
I am also quite sure that the Lord would be pleased if we tell of such experiences, as long as there is no hidden motives or agenda’s behind them, for if so then I believe this is where our experiences would abruptly come to an end. That said, let me now relate this wonderful story.

It has been told to me by spirit that rescue work is very important, in fact it is vital for those who are lost in the inner realms of the astral world. We, as humans, who are still living in the physical body, have a much greater capability in making contact with those lost. Why? Because those who are lost cling to the realm closest to the earth and to make contact with them is much easier for those in the physical then what it is for those in spirit. Though it is only a matter of time for when the (mind) of those lost eventually gives in to the strangeness of their environment. When this occurs the barrier they’ve created thins to the point where those in spirit are then able to break through. Though in some cases it can take a very long time for this to come about, depending on the mind of those lost.

But as you would know time there is much different to what time here is. And when I say lost, I mean those who are (NOT AWARE) of their body’s death.

Our mind at the time of death is very important as there is a number of reasons why a soul gets lost, or in better words “TRAPPED” between worlds. Tragic circumstances is one. Instant death could be another, where they never had the chance or the time to know what had happened. Then there are causes brought about by drugs, alcohol, wrong living etc. Some years back my brother-in-law was walking home from a night out at his local night club. He had a few drinks and so did the guy driving the car that struck him. The ambulance rushed him to the nearest hospital where he was put on life support and later diagnosed as being brain-dead. 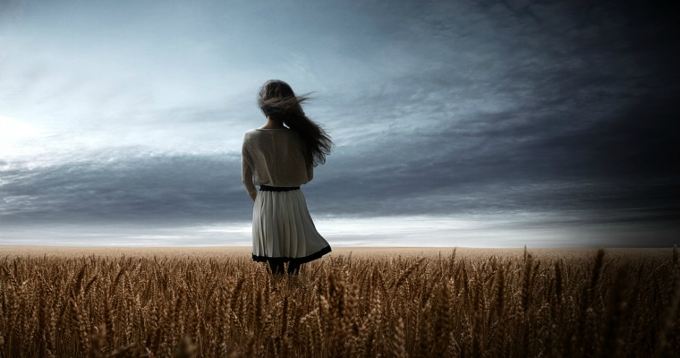 A Sydney heart specialist who is very well known here in Australia, Dr Chang, (whom later was murdered) asked my brother-in-law’s parents would they be willing to donate his organs as there was an urgent need for his heart. Well you can imagine how the parents would have felt being asked this, and yet it had to be asked as there certainly was an urgent need as I know who it was that received the heart. The parents knew their son was gone so they both agreed to give Dr Chang what he asked for. The operation went well, the one who received the heart done remarkably well, and as far as I know still is to this day. I guess if you had the heart of a 23 year old you would have to be doing pretty well indeed.

About a week or so later in the early morning as I lay asleep, I found myself out of body and standing in complete emptiness. I looked down to see what was under my feet, “nothing,” there was absolutely nothing but empty space, and yet it was perfectly clear in all directions. I turned and to my surprise saw my brother-in-law standing all alone with head down and in a terrible state of confusion. Not only could I see this, but also I felt it. He was trying hard to bring to memory of where he was. Then when he noticed I was present, his face lit up with a smile. He looked hard at me and said: “Where am I, what’s going on?”

There was not another word said between us for the whole duration of this event, and as if I knew exactly what to do and where to go, I began to lead him. 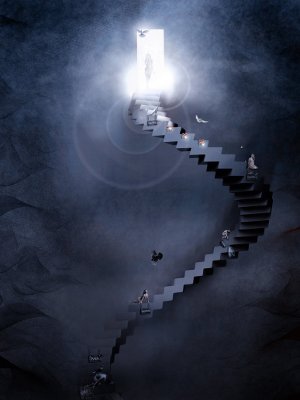 What I was doing and where I was leading him I had not the faintest idea, it was as if something had taken complete control and there was nothing I could do about it. He followed behind me in every step. With each step I began to rise higher and higher as if treading on an invisible stair case, up and up we both walked until finally out of nothingness a door opened inwards revealing a tremendous out pour of brilliant white light.

As my eye’s settled from the brightness, standing in the doorway was an elderly man with long flowing grey hair and beard. He looked much like one from the biblical days. He even wore a long white robe and had a very gentle loving smile. As soon as the door opened – coming from this inner world was an incredible strong outpour of wind and the light seemed to be the cause of it. This old man seemed to know we were coming because I did feel we were expected. I leaned myself forward a little so to peek into the world behind him as it greatly got my attention. With awe I could clearly see the greatness and beauty which now awaited my dear brother-in-law, and he was very eager to enter.

After he entered and disappeared from sight the old man with a wave of his hand beckoned me to come in, instead I just stood there in complete amazement of this beautiful place.

Then instantly the same power which elevated me to this height again took hold, it gently brought me back to where I started. At that moment I found myself back in body and wide awake. Quickly I woke my wife and told her what just happened.

Being killed instantly while intoxicated cause his confusion, it was only until he let his mind relax by seeing me, someone he could trust and relate to, then and only then could he be guided.

Jan Esmann - A Journey to EnlightenmentLove All
Comments: 0
Pingbacks: 1