Embracing Ahimsa Principle:. Chef of the Vegan Restaurant in Shirdi Sharing his Journey. 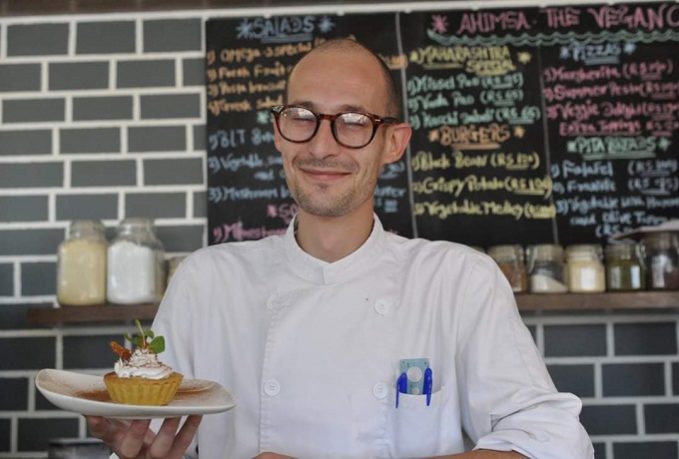 Can you tell us a bit about yourself and your journey to becoming vegan and then a chef in the Ahimsa cafe in Shirdi?

While travelling with my Guru Mohanji in South Africa in 2012, he had mentioned that he would have liked to see more easy and quick options available for people who prefer vegan food, vegan fast food in other words, a response to the many junk and meat oriented fast food outlets which are so ubiquitous all over the world.

He reached out to disciples of his who had already been in the industry for some time, having started a Saatvik restaurant a few years prior, and encouraged them to open a vegan cafe of their own. He suggested the name Ahimsa to reflect the philosophy of non-violence.

He encouraged me to participate in this project and perhaps even start an Ahimsa of my own, he told me that Ahimsa is to be a statement and I found it to be an inspired idea, something I could really get behind. The only problem was that I wasn’t vegan. I had stopped eating meat years before this, spontaneously but couldn’t resist a good pizza or slab of chocolate when it came my way and it came my way every day since in our culture, you see food that contains milk or some sort of milk derivative everywhere you look, but I felt strongly that I had to make the change, especially if I was to participate in a non-violent enterprise. The primary requisite, I felt was that my integrity be intact, that I myself not entertain a violent lifestyle or habits, but I found it difficult to give up dairy altogether. So, in order to inspire myself to make the change, to really make it my own, I started doing research and quickly found that not consuming animal products is one of the most powerful things I, as an individual, could to affect a positive change in myself and in the world around me. It’s a win win win: I get healthier, no one gets hurt to satisfy my appetite and my negative ecological impact is significantly reduced. I was sold.

Fast forward to 2014 and I began a 2 year apprenticeship in the above mentioned Saatvik restaurant in India and in August if 2016 we opened up shop in Shirdi, where I have been ever since, learning the ins and outs of the industry and doing my best to deliver with purity and to express and embody the principle of non-violence in my own person.

When we say Ahimsa people usually think of the Gandhi and his non-violent resistance movement (satyagraha) that had an immense impact on India. What could you tell us about Ahimsa philosophy regarding food preparation and consuming?

The philosophy and be expressed in a single sentence: Non who live should be killed, tortured, captured or exploited in any form for our consumption. 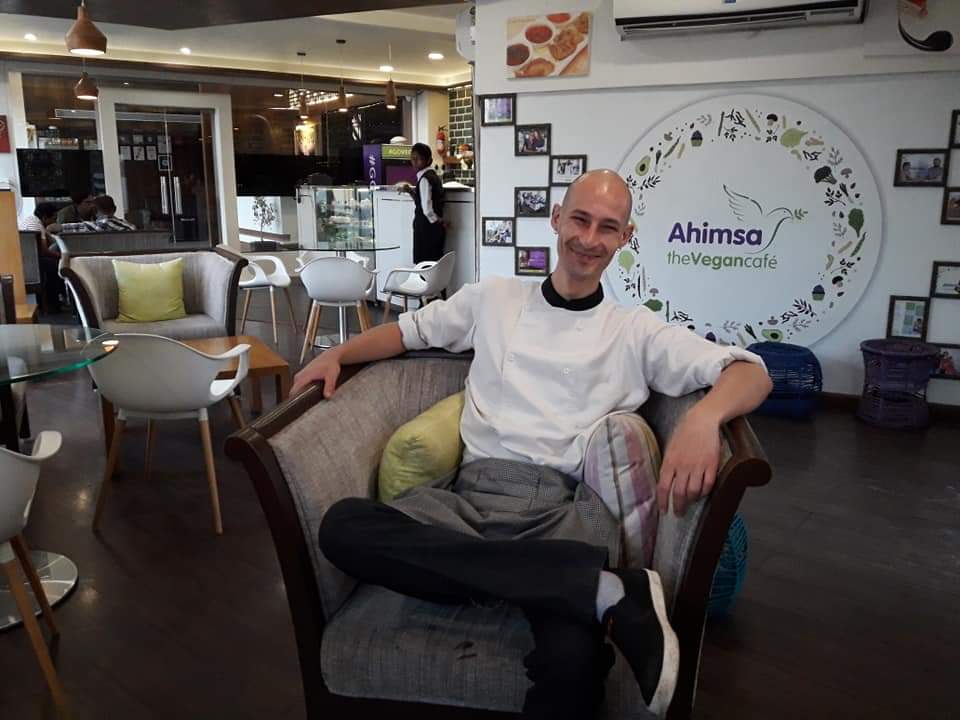 es, we start with the famous medical stricture: “First do no Harm.” Research is pointing more and more to the conclusion that not only do we not need animal products to be in good health, but that a plant based diet is in fact the optimal diet for the human species.

This effectively eliminates any argument for the consumption of meat or dairy as a necessity. Which means that we eat it because we like it.

This awareness creates a spontaneous shift in our attitude to food.

In your opinion, why should people adopt ahimsa principle and how this can affect their life?

I consider non-violence as the fundamental ethical practice upon which a good conscience is built, upon which empathy and compassion are built. It grows organically into greater sensitivity, subtlety and stability. It lends even the meanest of our activities an aspect of elegance and refinement and suffuses our mind and body with peace. Adopting a non-violent diet, a vegan diet also just so happens to be the best place to start if you are looking to get healthy, loose weight and eat for longevity. It should be understood however, that going vegan doesn’t automatically mean that you’ll be healthy. One can eat vegan and still be eating junk.

Does ahimsa movement have a positive impact on a global level and in which way?

The sheer amount of natural resources consumed in the process of animal husbandry is astonishing. Huge tracts of land and millions upon millions of tons of grain and liters of water and man hours go into the farming and processing of meat and dairy and yield consumable product far out proportion to what we put in, it is not a sustainable economy. If we sustained ourselves entirely on plants, the ratio of what we put into what we get out would be much higher and this kind of economy would stand the test of time.

No endeavor or enterprise or species which exists in the natural world can expect to enjoy longevity if it does not take sustainability as its core precept and an essential aspect of sustainability is the avoidance of unnecessary destruction or abuse of life. Nature is self-correcting and the principles on which it operates: Balance, moderation, replenishment, recycling and cycling are non-negotiable. If we don’t work according to these principles, we are done for.

A man’s character will explicitly exhibit the qualities of the things which he consumes, both physically and conceptually. We are what we eat after all. Consistent consumption of things which can only be attained through violence and exploitation will create violent and exploitative men. A society filled with violent men will naturally be a violent society and is therefore doomed to suffer violence. Conversely a mass shift into peaceful temperament brought about by peaceful habits and primarily by consumption of products from non-violent industry will create a global atmosphere of peace. Civilization starts and ends on your dinner plate.

We should never forget who we are or the glorious capacities with which we have been born. We are creatures of intelligence, imagination, refinement, sensitivity. We have the potential to make of this world a garden paradise, to manifest such ingenuity and art as would make even the gods themselves envious. We have the potential to explore the subtle realms and to attain the highest that can be attained, to go to that beyond which there is nothing; to realize ourselves as universal and eternal. Non-violence is the firm foundation, the platform from which mankind will launch its exploration of the cosmos and of its own consciousness. 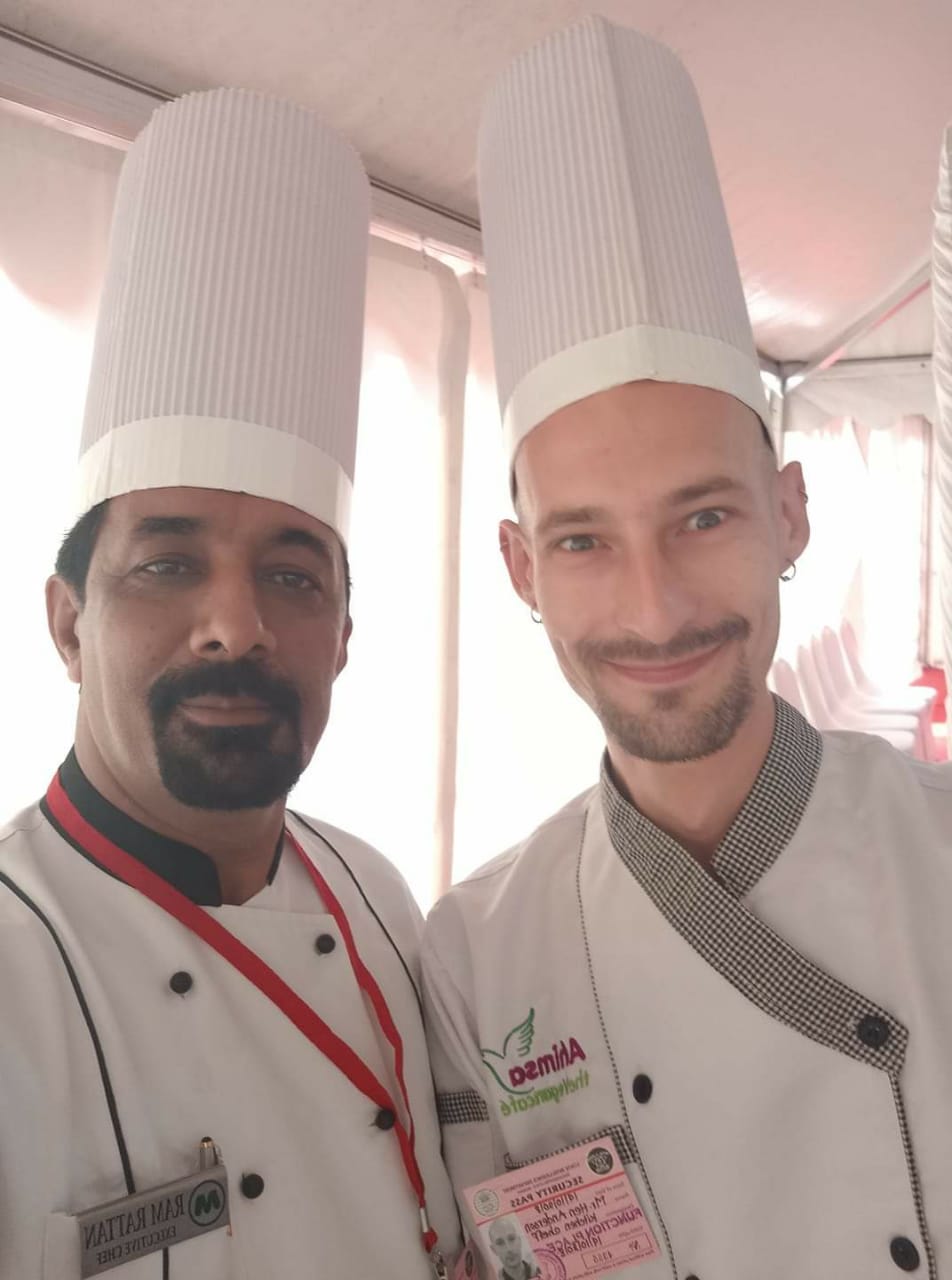 How has being a chef in the vegan restaurant changed your life?

It has given me a vision to follow. It has given me the opportunity to have my conscience and highest ideals be in alignment with my profession. Since Ahimsa was initiated and inspired by my Guru, it also gave me an appreciation of the fact that the ancient truths which he embodies can find a place in contemporary society in which they may be expressed. The teachings of the enlightened masters of all ages are as relevant today as they have ever been and are relevant everywhere. I need be nowhere other than where I am and still remain on my chosen path.

Can you give some advice for people who are thinking about going vegan but they lack motivation?

EAT WITH AWARENESS!!! Feel yourself while eating, be aware of the effect that the food you are eating is having on your body and your temperament and your energy levels. Listen to your own body before you listen to anybody else. Love your body. Love yourself. Be informed. Know your food and know where it comes from. Read and research and be aware of your options and be an educated consumer. Everything else will fall into place automatically. 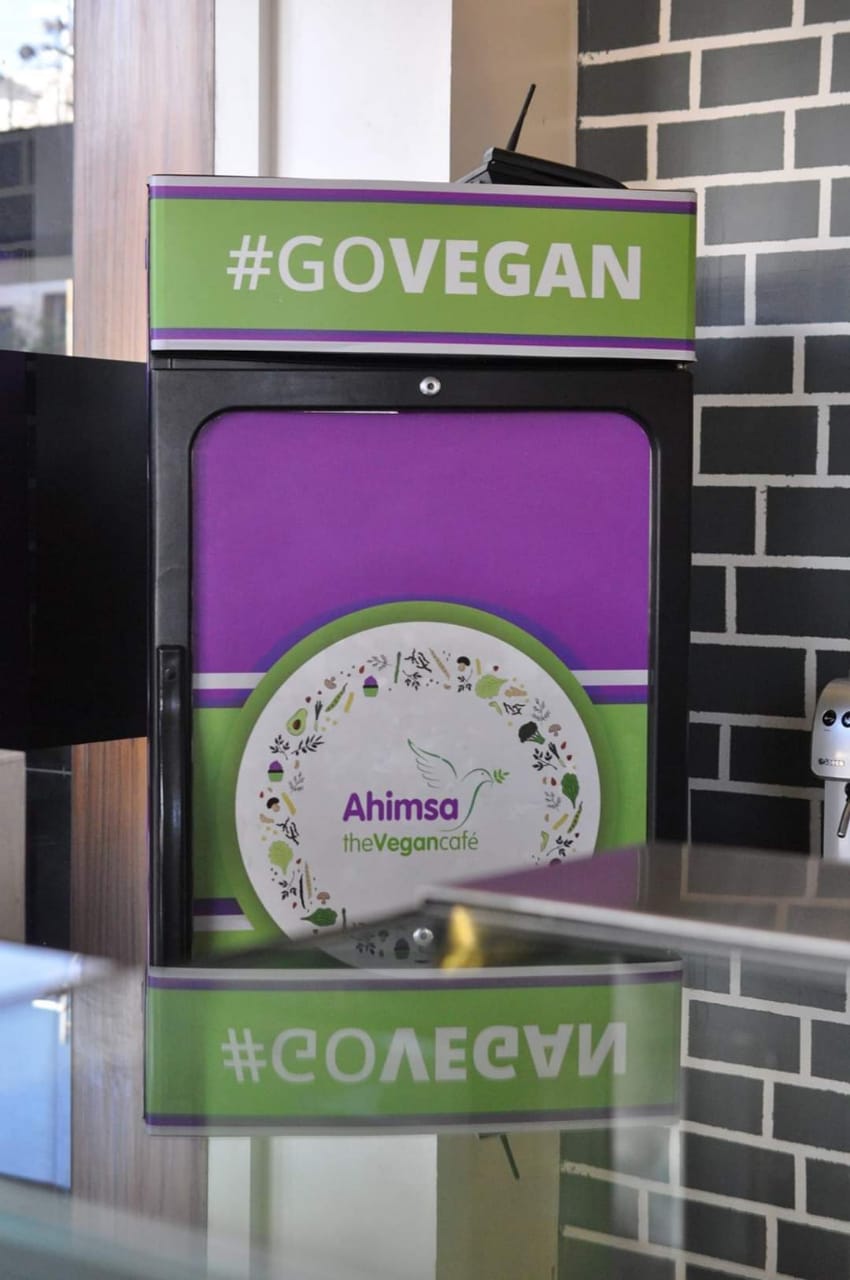 the end, can you tell us a bit about Shirdi and why people travel from all over the world to visit this place?

Shirdi is a spiritual powerhouse. Sai Baba who was a great Master, a true gem among men, lived here for many years and so the place is saturated with his energy and stands as a beacon of light, drawing and guiding many. It is like a pillar which supports the world. Baba recognized and heeded none of the things by which we usually identify ourselves like race or religion or nationality, he saw only himself in all and the potential for evolution into the supreme consciousness in all and so, people from all walks of life come to be refreshed by his undying and palpable presence in Shirdi. Baba also saw no difference between species and so, it is quite fitting that Shirdi now has its very own vegan cafe. 🙂