I went to bed around 9:30pm and began to slightly drift off to sleep, then all of a sudden I found myself out of body standing in strange surroundings which looked much like India. As I stood there gazing around I noticed the many different nationalities of people. On one side of the street were many little shops and on the opposite side was a fenced in area with a large gazebo type covering, with tin roof. This area was up on an embankment higher than the street level. As I stood there observing I could hear many voices singing altogether in one voice.

As I approached this higher area, sitting under the gazebo’s roof were many different races of people who sat cross legged, and they were all singing praises to God with closed eye’s, and every now again they would all raise their hands as if in prayer (salutation). As I watched all this with great fascination, a little elderly Indian lady with a very “RADIANT” face came up to me. She had the warmest of smiles and seemed she had been waiting for me. As she was only little she could only wrap her arms around my waist and not my neck. Then she gave me a most wonderful loving hug as if we both knew each other quite well.

I called her by name as if I always knew it; I said, hello MOTHER. While she was hugging me I was feeling an incredible “heat” coming from her body and it was penetrating my own body, though it wasn’t my physical but my astral body. It wasn’t unpleasant in fact far from it, but rather a most beautiful feeling of deep warmth of pure love which was so strong I felt it penetrating me with great heat. She radiated such an incredible force of heat that it took me by great surprise, if only I had the good sense to ask what this was and what is it doing to me. Then she stood on her toes and raised herself a little higher so to give a little kiss on my cheek.

Then she stepped back, looked deeply into my eyes and said: “DO NOT FEAR HE IS WITH YOU. Everywhere you go there will be little devils and demons watching you closely. They are sitting on top of all doorways watching your every move. Ignore them. Remember he will protect you. Never fear, you will not be harmed.” 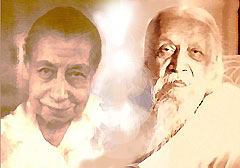 I was stunned at what she said, I called her Mother without hesitation in knowing that was her title, but I didn’t know her personally, (not to my knowledge anyway). She then turned and left with a white western man who seemed to be her escort, because he followed behind everywhere she went. I did see her sit with many others under the gazebo where she herself began to sing with raised hands.

She said doorways, could this mean other dimensions which I do experience often and have done all my life since at a very young age, and I have always been pestered by low entities etc. as far back as I can remember. Also in what I have been told during my own sittings (meditations), because of the rising vibration of the coming age, dark forces will run rampant trying to do as much harm as possible before their end comes. Could this be her meaning?

At last I can now put this to rest because I have just discovered the identity of Mother. For ten years she has been constantly on my mind; this discovery came about on Saturday the 6th of August while scanning through saints and sages of India on YouTube. She is The Mother (Mirra Alfassa) of Sri Aurobindo Ashram.

I have also recently discovered, through inner-help, other things which I won’t disclose because of their nature, personal. This breakthrough is all to do of the loving compassion of our loving Lord Sri Sathya Sai Baba.