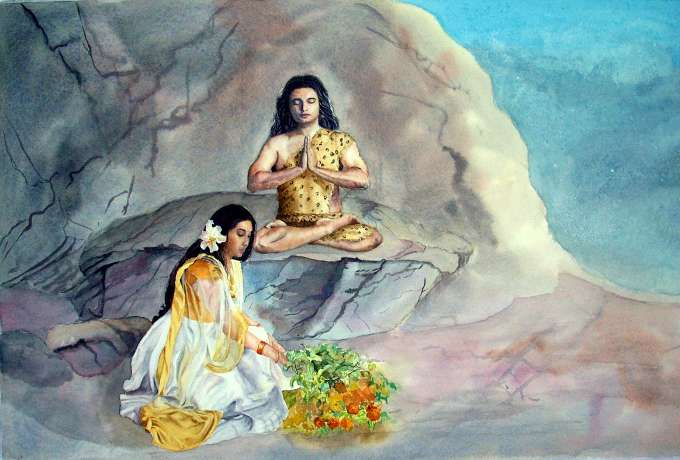 “Daughter of the Mountain,” Parvati Devi is the primary personification of Shakti Herself. Her consort is Shiva; Her children famously include Lord Ganesh and Skanda, but in fact She is the Mother of all Gods and Goddesses, of all humanity and Creation itself. Being Shakti’s “base form,” Parvati manifests Her wrath as, for example, Durga and Kali; and Her benevolence as, for example, Lakshmi and Saraswati. She is every other Goddess, as well. When we worship any Goddess, or even any God for that matter, we are ultimately worshiping Her.

Parvati is Shakti’s (i.e. the Divine Feminine’s) second incarnation as wife to Shiva. After Shiva’s first wife, Sati, died, Her divine body parts were strewn all over India (all the places where parts landed became Shakti pithas, or “seats of the Goddess,” which are now sites of Devi temples) — and Shiva completely turned His back on the world, resuming the life of an ascetic in a remote Himalayan cave, while the demon Taraka overran the heavens and earth below.

With no “living” Shakti (manifest Divinity) to balance Shiva (transcendent Divinity), the Cosmic order was thrown into disarray: Shiva had no interest in the world, and in any event was “powerless” (Sanskrit Shakti = Power, Energy) to help it. And so the gods prayed to Shakti to incarnate once again and turn Shiva back to the world, thereby restoring Cosmic balance and saving the world. Shakti agreed, and thereupon took birth as Parvati, Daughter of Himavan, Lord of the Mountains.

Of course, She grew up to be a stunningly beautiful, charming and alluring woman — Her “mission,” after all, was to lure Shiva out of His asceticism, and take Him as Her consort. And so every day, She would visit Shiva’s cave, sweep the floor, decorate it with flowers and offer him fruits and other gifts of the earth, hoping to win His love.

Shiva, however, never even opened His eyes to notice Her. So Parvati enlisted the aid of Priti and Rati, the goddesses of Love and Longing, who transformed Shiva’s cave into a sensuous pleasure garden, filled with fragrant flowers, exotic birdsongs and buzzing honeybees. With the stage thus set, Kama, the beautiful God of Love, appeared and shot Shiva with the arrows of desire. But Shiva, unamused, simply opened the third eye on His forehead and blasted Kama with an energy beam that incinerated him on the spot: And so Love was lost from the world.

“Do not despair,” Parvati told the gods, when this happened. “Shiva will become My consort. And when He does, Kama will be reborn.” 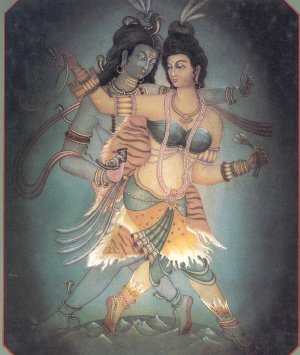 Whereupon Parvati disappeared into the forest, and became an ascetic Herself. She performed the most rigorous self-mortifications — sitting amidst bonfires on the hottest summer days, going without clothing in the winter snow, standing motionless on one foot for interminable periods, eating next to nothing; and in general, engaging in the most astonishingly intense sadhana. In fact, Parvati fully matched Shiva’s own asceticism, detaching Herself totally from the world; completely mastering Her body and mind. So perfect an ascetic was She that the other forest renunciates named her Aparna.

Finally the heat (tapas) generated by Parvati’s amazing austerities shook Shiva out of His meditation. He stepped out of His cave and, coming to know what She had accomplished, agreed to become Her consort. They married amidst the most divine celebrations, then left together for the peak of Mount Kailasa, where the Two became One, and Kama was reborn into the world.

Parvati and Shiva’s marriage is happy and full of blissful companionship. Under Her benevolent influence, Shiva the Great Ascetic became Shiva the Householder. In addition to their games and pleasures, however, they also had serious conversations in which they questioned one another on the most profound philosophical issues. Those conversations formed the basis of the Vedas, the Yoga Sutras and the Tantras — the three principle foundations of the Hindu faith. Inspired by Parvati’s intelligence and beauty, Shiva also became a fountainhead of the arts, dance and drama.

MORE THAN A CONSORT

Shaiva approaches to Hinduism tend to look upon Parvati primarily as the God’s submissive and obedient wife and helpmate. However, Shaktas focus on Parvati’s equality or even superiority to Her consort.

Take, for example, the story of the birth of the Ten Mahavidyas (Wisdom Goddesses) of Shakta Tantrism. This event occurs while Shiva is living with Parvati in Her father’s house. Following an argument, He attempts to walk out on Her. Her rage manifests in the form of ten terrifying goddesses who block Shiva’s every exit.

As the scholar David Kinsley explains, “The fact that [Parvati] is able to physically restrain Shiva dramatically makes the point that she is superior in power. The theme of the superiority of the goddess over male deities is common in Shakta texts, [and] so the story is stressing a central Shakta theological principle. The fact that Shiva and Parvati are living in her father’s house in itself makes this point, as it is traditional in many parts of India for the wife to leave her father’s home upon marriage and become a part of her husband’s lineage and live in his home among his relatives. That Shiva dwells in Parvati’s house thus implies her priority in their relationship. Her priority is also demonstrated in her ability, through the Mahavidyas, to thwart Shiva’s will and assert her own.”

However, it is not necessary to insist upon Parvati’s “superiority” in order to realize the power and value of Her teachings. As the scholar Ellen Goldberg notes, the story of Parvati’s efforts to win unity with Shiva is, in itself, a most powerful allegory of the sadhik’s/sadhak’s quest to merge with the Divine. As a yogini (female yoga adept) and tapasvini (female accomplisher of great austerities), Parvati offers all of Her devotees an inspiring model by which to master the intricacies of their sadhana. Goldberg writes:

“Parvati (Shakti) is the yogini/ tapasvini par excellence. As a rule, the only necessary requirements for the [yoga] path are (1) access to the teachings; (2) a guru; and (3) one-pointed dedication to the practices. … [Parvati] fulfills all three requisites. … The hatha yoga tradition clearly affirms that the transmission of oral teachings proceeds directly from Shiva to Parvati. … This primeval discourse in turn reflects the prototypical relationship between guru and disciple. … [And] as a yogini, Parvati performs her austerities (tapas) dutifully — subjecting herself to strict penance, eating tree bark, standing on one foot, and so on — to win or unite with her beloved Shiva.

“Her ascetic disciplines [prepare her for a] progressive ascent through body, speech and mind; and lead her (via preparatory and purificatory practices) to the higher attainments of yoga realization. … Once her karma is dissolved, Parvati (as model disciple) is drawn into deeper and more subtle forms of meditation, leading to the merging of [herself] and Shiva in the form and figure of Ardhanariswara. 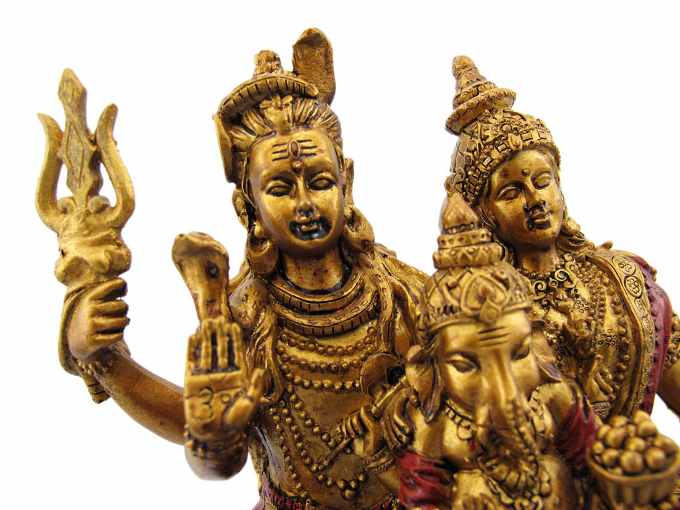 “In this model, active engagement through asceticism or tapas is advocated as the prerequisite for union with Shiva: Parvati takes form as a human disciple (nari), dresses in the clothes of an ascetic, and — with matted hair (jata) and modest diet (mitahara) — remains in one-pointed tapas. She knows that to effect a union with Shiva and to actively save the world she must perform these tapas. …

“Shiva is informed by the devas [lesser gods] of Parvati’s [effort], and he appears before her as a brahmacari (celibate monk) who speaks of Shiva’s wrathful nature to test her resolve and commitment. Parvati is steadfast, and Shiva is duly convinced of her one-pointed determination and devotion. He then appears to her as himself and agrees to marry her. Her tapas won her self-chosen husband, Shiva. Parvati [thereby] actively subverts the normative mode of behavior for women (stridharma). … In this narrative, Parvati is not an object of sexual desire, but rather she is a [spiritual] heroine who earns her rightful status at the side of Shiva.”