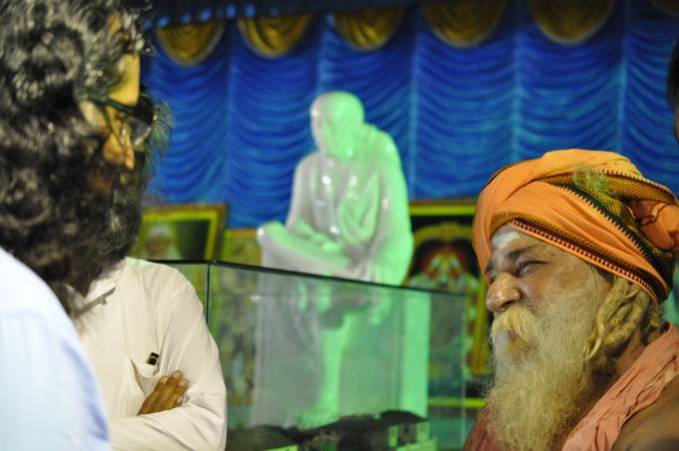 Any number of these appellations would hold equally true for a saint that walked this Earth for 106 long years. But above all these roles he played, the truest description of Shri Siddheshwar Baba Ganeshananda Giri is as a staunch devotee of Shirdi Sai Baba. As a young boy, he lived with Baba in Shirdi. He then spent the rest of his life working tirelessly to spread His universal messages across India.

Ganeshananda Giri was born in Suchindram, Tamil Nadu on 19th December, 1911. When he was still under 4 years old, Babaji was separated from his parents at Tirupati (site of a holy temple for Lord Venkatesha, a form of Lord Vishnu). With the help of some kind strangers, moving from one place to another, he finally reached Shirdi. He spent over two and a half years living with and walking with Sai Baba. This phase of his life laid the foundations for and clarified the purpose of his life’s mission. Even after Sai Baba’s Mahasamadhi in 1918, He appeared to him from time to time, sometimes physically and at others through visions. Baba spoke and guided him at every step.
After Sai Baba’s Mahasamadhi, Babaji spent nearly 40 years in Shirdi doing seva (service) and working at the Samadhi mandir. Then, upon Sai Baba’s instructions, he left for the Himalayas and became a parivrajaka (nomadic sanyasi). He became a Naga sadhu and spent time with the Juna Akhada in Varanasi. He spent years doing tapas (penance), sometimes beyond 18 hours a day. After several years in this mode, Baba again asked him to travel and spread his message to people all across India. 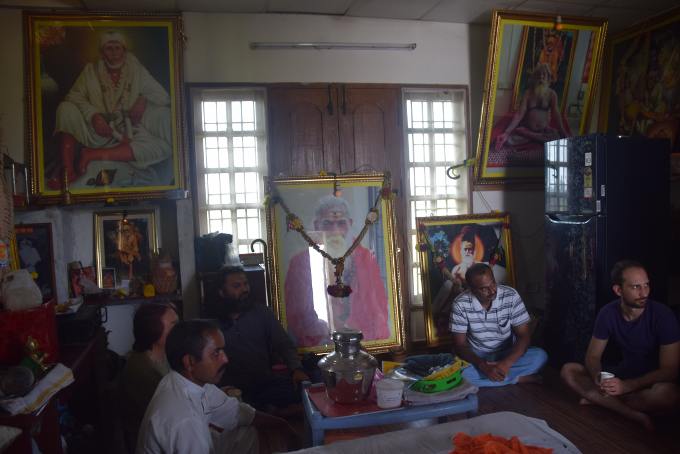 Babaji would share several stories and anecdotes from his life to guide people on the right path, the path of dharma (righteousness) and God. The most interesting stories were from his childhood in Shirdi. He was part of a group of children that would flock around Baba everyday. Baba would give out sweets to all the children after his procession, but one day, he missed giving it to Babaji. In anger, the young Babaji stole a sweet from Baba’s jhola (bag). Unfortunately, Baba saw it and slapped him for his misdemeanor. Baba never beat anybody and he was the first person that Baba slapped. In anger, Babaji ran away to Shama’s house and didn’t come to Dwarkamai for 4 days, saying “The old man is beating me. I won’t come there.” Finally Baba called him back and spoke to him with affection, but also warned him to never steal again! This episode inspired Babaji to give chocolates to visitors, whenever someone came to seek his blessings.
Another time, after Sai Baba left his body, Babaji cried out to Him to fulfill his wishes. In his prayers, he asked for lots of money, a big car, good house, servants and all sorts of facilities. He took a flower from the Samadhi and took it home. But nothing happened and he was soon disappointed. One day, when Babaji was walking through the streets of Shirdi, he saw Sai Baba walking ahead of him! Baba turned and looked at him. “You think I’m dead? Here I am! You want a car and a bungalow, money and all that? OK, your body is your home, whole world is your bungalow, and your brain is your money. I am with you and you should be spreading my love and kindness in the world with your own life. Everywhere you will feel my hand and support and I will always be with you”.

It is well known that Sai Baba would go to a well and draw water from it to water plants and flowers. Baba would also use the water for his bath. He would take his intestines out, clean them and dry them. He would also dry out his langot (loin cloth) on the fence. Once Babaji saw this and laughed at Sai Baba. Sai Baba scolded him in Hindi, made His loin cloth into a ball of cloth and threw it on Babaji. Babaji said “I still have that loin cloth with me. When someone donates in lakhs for a temple, I give them a bit of that loin cloth as a blessing”. Babaji also has other gifts from Sai Baba that he has preserved as treasures, like a silver one-rupee coin he received from Baba (this coin was printed in the British era and has been preserved in Babaji’s altar) and some soil that Baba had walked on. 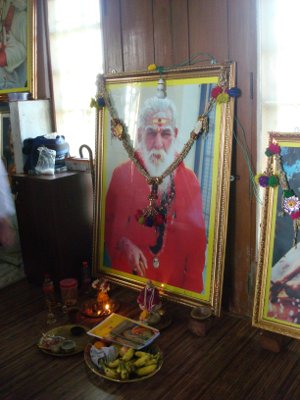 Babaji presided over the construction of more than 10 Sai Baba temples across India. Each temple became a centre for seva as well, conducting regular annadaan (food seva) and other social service activities, besides aartis and other ritual poojas. From Solan (Himachal Pradesh) to Khambhat (Gujarat) and to the interiors of Tamil Nadu, Babaji’s work touched the lives of many people across India.

Babaji would never take centre stage or credit for anything. He would always attribute everything to his guru Shirdi Sai Baba and describe himself as just His devotee. No wonder many saw him as Sai Baba himself and found their wishes coming true and their problems dissolving, just as they would upon praying to Sai Baba. Babaji’s blessings transformed people’s lives. Childless couples were blessed with children, struggling businesses turned around, ailing patients regained their health quickly. People straying from the path of dharma were brought back to the path of divinity, and agnostics turned into believers. Many people experienced his ability to read their minds and solve their problems without even asking him. Several others were lucky to partake of food lovingly cooked by Babaji himself, food verily given as prasad from Sai Baba Himself!

Even at the ripe age of 106, Babaji was a force unto himself. He would walk with great vigour, travel alone and handle all of his activities on his own. He was a perfect instrument of Sai Baba, driven by purpose and relentlessly pushing forward to fulfill his life’s mission. Babaji wanted to leave his body in Shirdi, but Sai Baba had other plans in store for him.

Baba wanted him to build a final temple in Chennai and asked him to attain his Samadhi there. Baba also orchestrated a divine collaboration with Shri Mohanji, a spiritual Master deeply connected to Sai Baba, the Nath and Siddha traditions. Babaji and Mohanji met in Shirdi in December 2015 and a deep bond was established. Babaji and Mohanji met several times in the next few months, while Mohanji and his followers got deeply involved in supporting Babaji’s mission. Babaji launched the temple with great fanfare through a spectacular Bhoomi Pooja function in March 2016. Support poured in from all directions, as did devotees – the function saw nearly 10,000 devotees stream in on a working day in a small village 90 minutes outside Chennai city; a clear pointer to Divine Grace propelling the project!
Babaji was not only a spiritual guru but also a master planner and organizer. He wanted the temple activities to continue smoothly even in his absence. To this effect, he set up a trust, in which he asked Mohanji to take on the role of Chief Advisor, while a group of other associates took on various execution related responsibilities. In a way, he bequeathed his spiritual role in the trust to Mohanji so that he could guide the trust members to fulfill their responsibilities in service of Baba. As Mohanji says, Babaji told him “Sai Baba is with you. Baba trusts you. Baba guided me to you. So it’s all one family”. 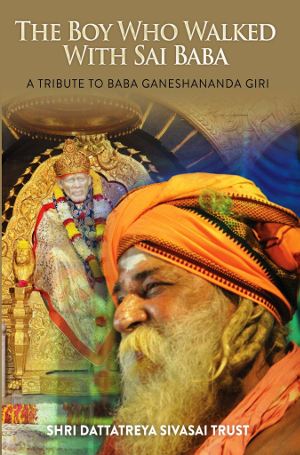 Babaji attained Samadhi in April 2016, less than 2 months after the Bhoomi Pooja. However, he continues to bless and guide people from his Samadhi. 48 days after his Samadhi, a Guru Pooja was conducted to install Babaji’s favourite Sai Baba idol and a Shiva Linga on the crest of his Samadhi. During the Pooja, several people reported feeling a jolt from inside the Samadhi as if Babaji was moving vigorously inside. Other visitors have reported feeling strong vibrations from the Samadhi during their visit. Babaji himself used to say that after his Samadhi, he would be more active and work through his sookshma (subtle) form – these experiences just reaffirm that reality.

Mohanji always says that Masters of Ganeshananda Giri’s stature do not say or do anything without a reason. And the reason is to liberate a person from bondages or blockages that they may not know or experience, but the Masters know. Masters like him work ceaselessly to take people to the path of liberation. They are part of a grand tradition, a grand awakening.

It is indeed a good fortune that people had the opportunity of meeting and spending time with a true Master such as Baba Ganeshananda Giri. No amount of gratitude is enough for his selfless service of over 100 years.

In Mohanji’s words, the best way to benefit from his teachings, is to “be available and 100% selfless”. Instead of focusing on oneself alone if we think what else can we do for the world, it would surely take us towards liberation while living, and definitely while leaving.

Edited except from the book "The Boy who walked with Sai Baba", published by Gurulight.