Amazing Ancient Pyramids Around the World 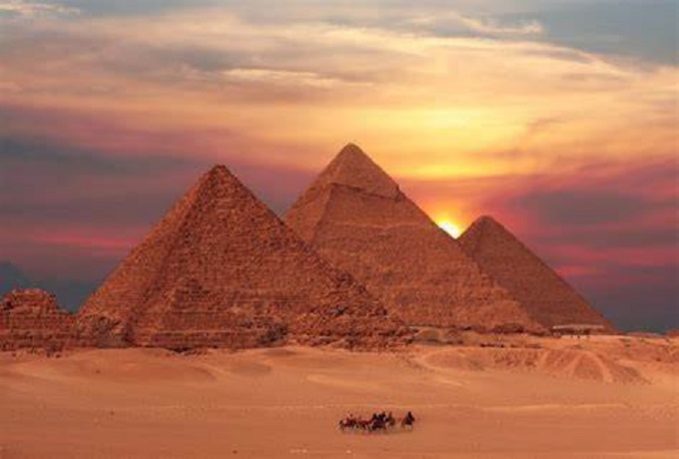 What is it about these awesome ruins that are so irresistible to us? Is it a curiosity to understand the people that came before us? Is it the thought of finding the treasure? What is it about a crumbling building that just makes your heart race and wants to step inside? I know I can't resist a good adventure so I curated a list of super cool pyramids with awesome histories around the world. Of course, now I want to thoroughly explore every one of them. 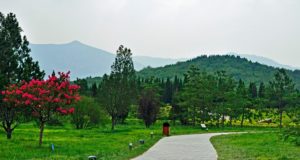 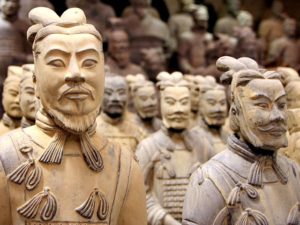 The pyramid houses Emporer Qin Shi Huang's tombs, who united China's six warring states into one "country" and then died in 210 BC. This incredible tomb was accidentally stumbled upon by two men digging a well who found the Terra Cotta warriors. This is one of the only parts of the tomb to be uncovered, as the mound itself remains intact. According to scientists, we don't quite have the technology to safely penetrate the actual tomb, and it's rumoured to have rivers of mercury flowing around an underground palace with ceilings decorated like the sky and all the opulence an Emporer would need int he afterlife.

The Pyramids of Yonaguni, Jima, Japan 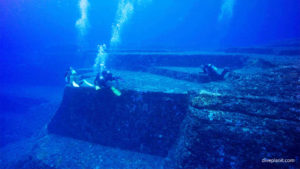 Is it manmade? Is it natural? This is still hotly debated by scholars, conspiracy theorists, Atlantis believers, scientists, historians, and more. Some scientists have said that there is a cluster of structures that could be up to 5000 years old based on stalactites found in a nearby cave. He and many others say the markings on the stones have clearly signed the stones were cut from a quarry and little artefacts found resemble animals and masks. But others say it's very obvious that it's not manmade and easily explain away the holes cut in rocks, uneven nature of the structures, etc. If it is manmade, it likely sunk during one hell of an earthquake, and those who say they are natural, say "no way." So the mystery continues for now.

Ziggurat of Ur, Iraq 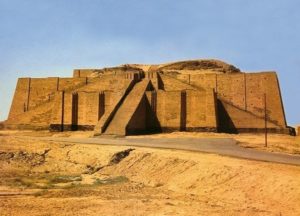 This stepped ziggurat was noticed by Sir Leonard Woolley in the 1920's, when he found a staircase that led up to another staircase which eventually led him to believe there was something quite a bit bigger under his feet. After uncovering the structure, it was noted that the place was likely a storehouse and centre for healing and nourishment. What would have been a large temple atop the base has not survived, but the base has due it's incredible feats of engineering to allow damp air to escape and keep bricks dry, and drainage systems for rain? Saddam Hussein tried to restore the facade of the sight but it's now starting to show signs of damage and wear again, some due to war. 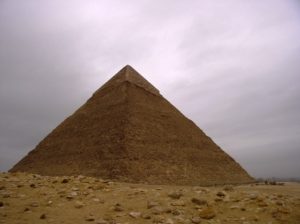 On the Giza Plateau, Khufu's Pyramid is the largest in the world and is the oldest remaining Wonder of the World. About 480 feet tall and 756 feet across the base, it was, for 3600 years, the tallest man-made structure in the world. What is so cool about this pyramid isn't only that's it's so intact or that it faces directly north, but it's full tombs, artefacts, secret passageways, and air shafts that are believed to be intentionally facing certain directions so the king and queen could reach the afterlife. 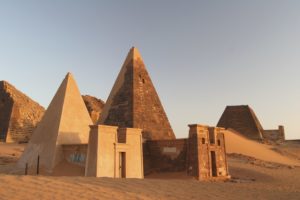 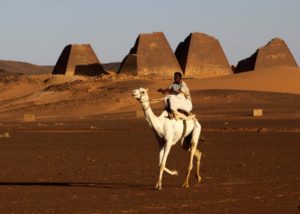 Meroe, located in modern-day Sudan (the Nile River valley), was built up with over 200 pyramids in the Nubian Style (steep sloping sides). They were built as tombs for Meroe kings and queens which had united the entire Nile valley and made this their capital in about 300 BCE. Many of the queens buried here were brave warrior queens. The pyramids were mostly untouched until about 1880 when an Italian explorer, Giuseppe Ferlini, lopped the tips off most of them in a greedy search for treasure. Yes, he did find some antiquities (primarily jewellery), that are now in museums in Berlin and Munich. He hadn't been the first looter to the tombs, but he certainly did the most damage. Finally, in 2011, Meroe was named as a UNESCO Heritage site, although there is a travel warning to Americans considering a visit.

Bosnian Valley of the Pyramids, Bosnia and Herzegovina

Bosnian Valley of the Pyramids represents the biggest complex of pyramidal structures in the World. It consists of Bosnian Pyramid of the Sun (with its height of over 220 meters is bigger than Cheops Pyramid), Bosnian Pyramid of the Moon (190 meters), Pyramid of Bosnian Dragon (90 meters), Temple of Mother Earth and Pyramid of Love. Pyramids of Sun, Moon and Dragon form a perfect equilateral triangle with 2.170 meters distance between their tops. All pyramids are oriented toward the cosmic North.

Geo-radar and thermal analysis confirmed the existence of passageways and chambers inside the pyramids. According to the radiocarbon datings (Poland, 2011) and pedological analysis (Bosnia, 2006) pyramids are built over 10.000 years ago. Underground labyrinth is tens of kilometres long and consists of passageways, chambers and artificial lakes. 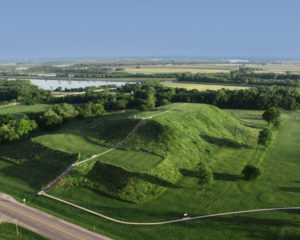 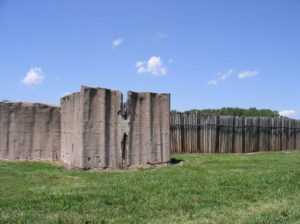 A UNESCO Heritage site, the Cahokia Mounds have seen an incredible and some-what sad history. Much like the Nubian pyramids, many of the original mounds were flattened by horseradish farmers (the largest mound being razed in 1931). During its heyday in AD 1100, Cahokia was as large as New York City in the early 1700's and housed tens of thousands of people that may have been from multiple tribes or groups from the region. Evidence of human sacrifice has also been found from burial pits and graves. Not much is known about the demise of Cahokia, but it's thought that perhaps by the 1100's, when the defensive walls were built, that they may have been threatened or under attack in some way. The other is that they simply dissolved into other tribes or groups. Either way, what's left of the mounds and decomposed remains of homes is a pretty cool testament to how advanced this early American civilization actually was.

Teotihuacan, Mexico: The Pyramid of the Sun 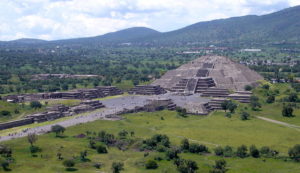 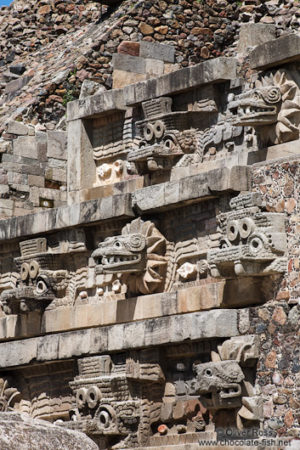 Ancient Meso-American civilization thought to have been built around 100 BCE. Construction continued for a few centuries and at the peak was thought to have 125,000 people. The Mayans were largely considered to be the builders of the state, but other ethnic groups later claimed ancestry and heritage to the Teotihuacan people. Named a UNESCO heritage site in 1987, it is now the most visited site in Mexico. 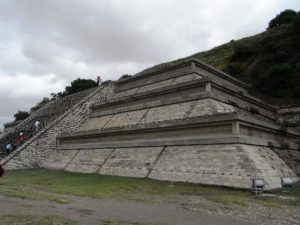 This beautiful structure was named "the most beautiful city outside Spain" by Cortes the explorer. Scientists have dated it to about 2000 years back and as the civilization grew, so did the pyramid, which eventually became the largest pyramid on Earth. Full of alters and tributes to gods, it's very clear that human sacrifice by way of decapitation was widely used...usually involving children. Murals and stonework that depict a very religiously inclined people fill the grounds and visitors can now explore the ruins above ground and in the tunnels that weave through the structures below. 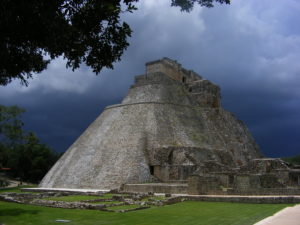 Uxmal is flat-out awesome. This city, along with Chitzen Itza, survived the major collapse of the Mayan civilizations around 900 BCE. It's thought that the pyramid itself was actually built in two phases due to a difference in style in some building elements. The pyramid itself has a very distinct, round shape with a steep staircase lined with terrifying masks leading up to a giant stone serpent mouth. Awesome. There are incredible amounts of intricate structures on the grounds including a ball court, cemetery, homes, temples, and alters. 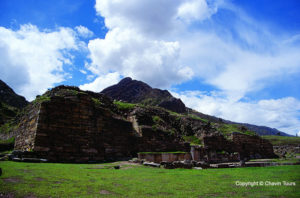 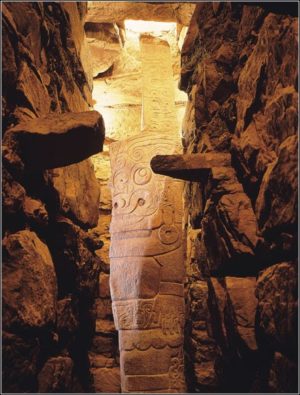 Chavin is a striking pyramid and city with incredible stonework and terraces where many groups of people came and went between 500 and 300 B.C. in the Andes. Considered one of the oldest-known pre-Columbian cities, and the art, architecture, and stonework are considered second to none. There were very advanced drainage, vent, and infrastructure systems throughout the site, making it a mecca for many cultures and religions to come together in this ornately decorated city. Tombs and beautiful artefacts have been found as preservation efforts increased and all people living there were moved out by about 1940 in order to preserve the site. 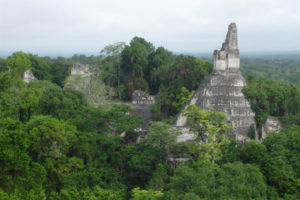 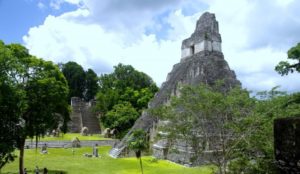 From about 200-900 AD, this Mayan capital city was alive and thriving. Architecture does date back to the 4th century BC and then by end of the 10th century. The city's history is rife with incredible stories of conquest, technology, astronomy, human sacrifice, sports, politics with other cities, and intricate art and stonework. During this time, they thrived and ruled for centuries but evidence shows that eventually some of the structures were heavily burned and overtaken by the relentless jungle. Two expeditions were made by Europeans to this area in 1525 and 1696, it is uncertain which of these actually found the ruins first since they were not described in the first expedition's notes, although we know they went to the area. Today, this UNESCO heritage site is an amazingly exciting site to visit and looks straight outta Tomb Raider or Indiana Jones. It's packed with temples, tombs, jungle, secret passageways, and is highly recommended if you are looking for a thrilling adventure. 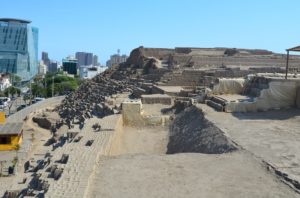 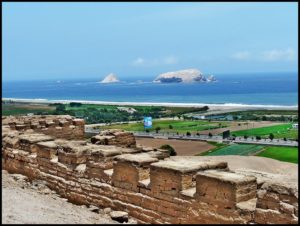 Built by many different cultures in Peru around 200 AD, this site became a place of converging groups to trade and stay in the coastal region for about 1300 years. Its power and cultural influence waxed and waned a few times throughout history as certain groups of people became more dominant than others, but it wasn't until 1939 that archaeologist Dr Alberto Giesecke began poking around and investigating the site after finding an idol and door to the temple (I mean, seriously...how cool is that?). He began restoring the "Temple of Pachacamac", and some of those restored structures can still be seen today, they are not necessarily 100% accurate to what they would have looked like because the site has been looted and damaged by weather for centuries, making it tough to see what some of the buildings would have looked like. Others are still intact! 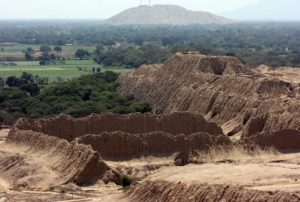 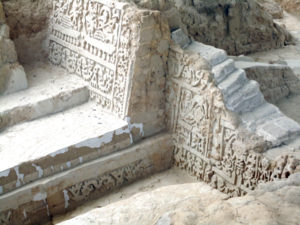 26 beautiful but damaged and eroded structures reside in this part of Peru. One of three original cities, with construction beginning in 600-750 AD, and Tucume being the third, thriving between 1100-1500 AD. The 26 mounds were not well surveyed until 1988 when Thor Heyerdahl (of ConTiki fame) explored the site and suggested, after finding over 40 tombs full of artefacts and beautiful artwork depicting boating, that they were experienced seaman. Many of the tombs discovered made it pretty clear that sacrifice was a practice here, as many female weavers and textiles were found in graves together. Today the site is still being studied but is pretty eroded due to sever looting and El Nino storms. 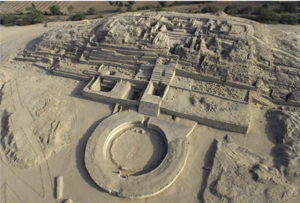 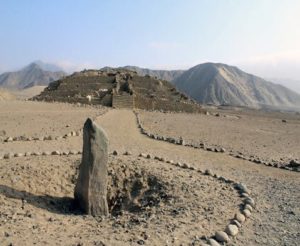 Caral is considered the oldest city in the Americas at 4000-4600 years old. Just wrap your head around that. Not too much is know about this site yet except that it seems pretty clear so far that it was a peaceful place of arts and/or trading, as any musical instruments and pots were found. No mutilated, decapitated, sacrificed bodies or weapons.

Jul 25, 2019Editorial Team
Pilgrimage to the PyramidThe July Edition of The Awakening Times is Out - Pyramid Special!