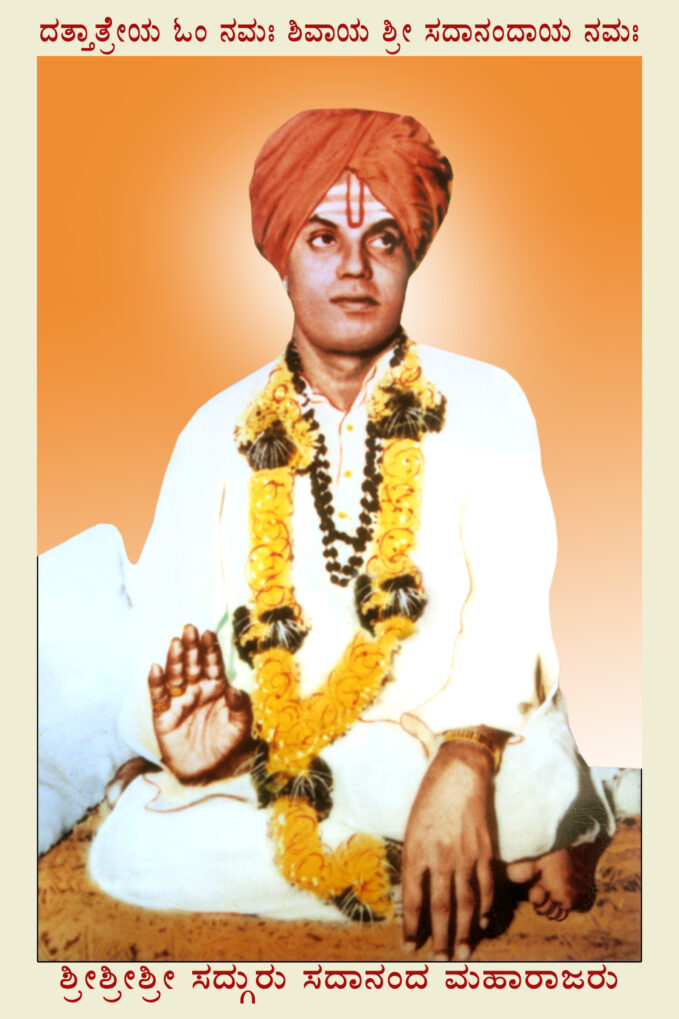 Sri Sadguru Sadananda Maharaj is none other than the incarnation of the supreme Lord Dattatreya, who has come down to earth in the human form in order to uplift human beings and Dharma in Kaliyuga.

Sadguru Sadananda is the King in the galaxy of eternal Gurus. Having appeared as Siddha He has revealed His innate spiritual powers from the very beginning and has shunned all worldly things. He is the beacon light to those who are adrift in the swirling waters of earthly existence. He helps us to ford across the ocean of Samsara and to cut asunder the knots of earthly bondage. Sadguru Sadananda has so far spread the message of social harmony and universal love. Sadguru Sadananda is the incomparable “Purusha” who is the embodiment of all virtues. The nectarine sweetness of Madhura Bhakti alone pleases Him and not anything else. He himself is the chariot that carries one from this mundane world to the shores of salvation and bliss. Sadguru Sadananda should be our desire that satisfies all the Satwika desires.

Dattaguru  Sadananda Mahara spent the last span of His life in Nashik, Mumbai, Bangalore, Bijapur and Hubli & Telgi. During this period He built His Ashrams at Bijapur, Mumbai, Hubli & Bangalore.

During the above period, Sadguru Sadananda Baba has performed thousands of Miracles which have been experienced by many devotees in different parts of India and Abroad.

Some of the different kinds of mystic powers performed by Dattaguru Sadananda Mahara are narrated below :

It is a routine for Sadananda Baba to create, out of soonya or vacuum or void, Bhasma, Linga, Rudraxas, Statues of Gods and Goddesses, Shankar Saligrams, feet replicas (Paduka), Atma Linga, Diamond, Betel Leaves, Betel nuts and to grace those articles to His devotees in order to create devotion in them. There are thousands of miracles performed by Dattaguru Sadananda Mahara in curing diseases without medicines like Cancer, Heart attacks, T.B, paralysis, gastric trouble and kidney stones etc. When the suffering of the devotee is in point of danger Baba used to take all that sufferings to himself and cure the devotees. 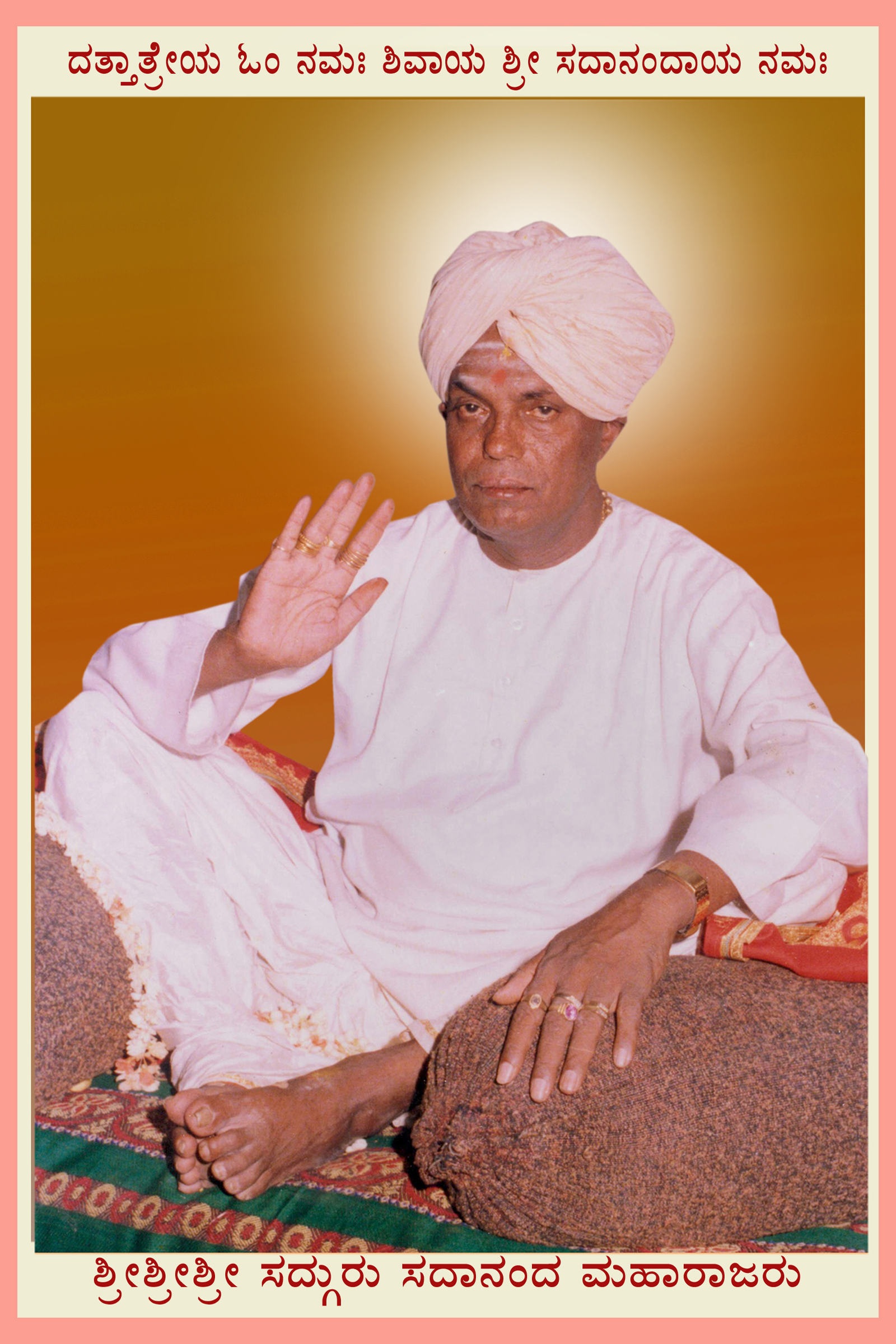 Dattaguru Sadananda Mahara has shown to His devotees the Avatars of Gods and Goddesses that too as per the faith of the devotees. The common Avtaars shown by Sadguru Baba are, Lord Dattatreya, Ganesha, Raghavendra Swami, Adishakti, Laxmi, Ishwar, Krishna, Narasimha, Hanuman or any form of or any kind of animals like snake, tiger, birds etc. Sometimes He has converted Himself as a Baby, Adult or the Aged, sometimes He is found physically present in America, Mumbai ashram and other places simultaneously.

Sadguru Sadananda Baba has lighted chimneys, lantern, petromaxes by using water, even Cars have been run without petrol. Many devotees smelt the scent oozing from the feet of Sadguru Baba. With His mystic powers He used to know the worries of His devotees and He had a power to wash the sins of His faithful devotees. Innumerable Lingas were floating around Baba when He was bathing in the river water. Thousands of Rudraxas were poured from His body at once. Water. (For further details of these Books, please Sadguru Sadananda Baba’s Ashrams at Mumbai, Bangalore, Bijapur and Hubli).

Dattaguru  Sadananda Maharaj has mastery and control over all kinds of feelings. All virtues constitute Baba and He would always be in the state of bliss. Baba would give “sparsha darshan” to all His devotees without any restrictions. Hence He is the King in the galaxy of Eternal Gurus. One can appreciate the “Prati Namaskar” of Sadguru Maharaj, unlike other Gurus. His devotees will always be happy and continuity of their faith will certainly lead them to salvation. He used to ask His devotees to attend His Bhajans and Aartis in His Ashrams, especially on Mondays and Thursdays. He has given us a very powerful Guru Mantra i.e. :

By chanting this Guru Mantra regularly, all the problems of devotees will be solved by Dattaguru Sadananda Maharaj and will be blessed with Health, Wealth and Happiness.

Dattaguru Sadananda Maharaj has come down to earth in the Human form and after blessing all His devotees, He had to leave the Human body and took Samadhi on 12th February 1996 at Rayapura, Hubli, (Karnataka State).

It is said that those who had immense faith in Him and left their fate in His hands while concentrating only on efforts towards following the path that was shown by Him have been rid of all their sorrows and pains and have had everything that they wished for and also liberation and immense peace of mind. Though Dattaguru  Sadananda Maharaj does not physically exist amongst us today, He is always there for His devotees and all those who believe in Him are blessed by His powers forever and ever.